The most popular Irish babies' names for last year have been revealed by the Central Statistics O...

The most popular Irish babies' names for last year have been revealed by the Central Statistics Office.

Jack and Emily were the most popular names registered in 2019.

The publication, for the second consecutive year, is distinguishing names which contain the síneadh fada.

Jack was followed by James, Noah, Conor and Daniel as the first five most popular names for boys.

Back in 1969, John, Patrick, Michael, James and Thomas were the names most favoured by parents of new-born baby boys. 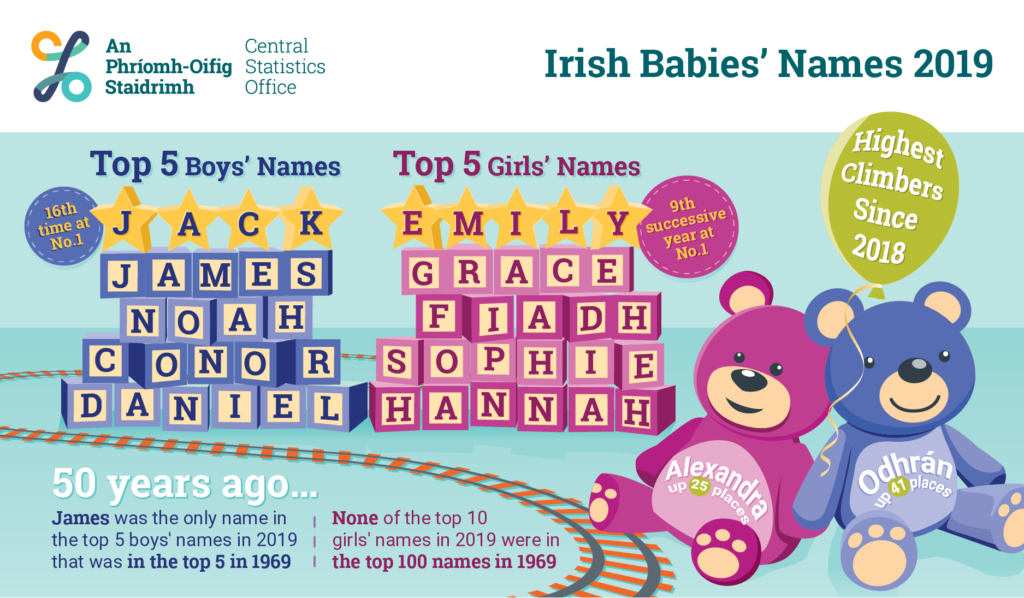 Interestingly, not one of the top five names for girls appeared in the top 100 names a half century earlier.

Mary, Catherine, Margaret, Ann and Elizabeth were the most popular names for baby daughters in 1969 - with 2,182 baby girls named Mary in that year.

Odhrán with the síneadh fada, Eli, Ruairí and Joey were new entrants into the top 100 for boys in 2019.

The boys' names with most growth in popularity in terms of rank between 2018 and 2019 were Odhrán, with and without the síneadh fada, together with Eli, Kayden and Ruairí.

There were two new entrants to the top 100 for girls: Doireann and Méabh (with síneadh fada).

Alexandra, Heidi and Hollie were the girls’ names growing most in popularity - with Alexandra moving up 25 places and Heidi and Hollie both moving 20 places in the rankings between 2018 and 2019.

Most popular baby names for 2018 revealed