Retail sales fall by over 12% in March

New figures show the volume of retail sales decreased by 12.7% in March when compared to February...

Retail sales fall by over 12% in March

New figures show the volume of retail sales decreased by 12.7% in March when compared to February this year.

This is the largest monthly decrease since January 2009, the Central Statistics Office (CSO) says.

When the motor trade is excluded, the volume of retail sales decreased by 1.9% last month.

However a number of sectors saw a large increase in sales.

This included food, beverages and tobacco (excluding supermarkets) which grew by 17%.

The sale of electrical goods  also grew by 5.9%. 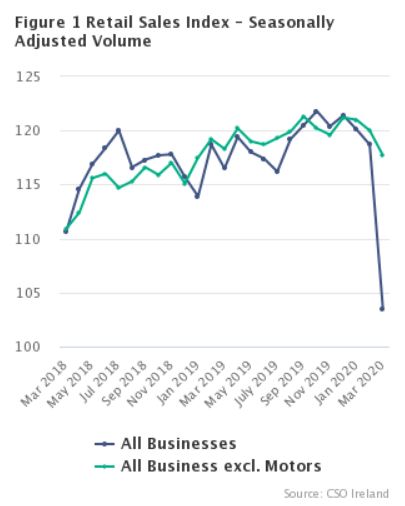 However, when compared with February, a number of sectors saw the largest decrease in sales.

The sale of books, newspapers and stationery fell by 29.2% - while department stores sales dropped by 25.8%.

While online sales represented 4.3% of the total turnover - the highest online share since collection of this breakdown began in November 2018.

Except for motor trades, all sectors saw an increase in the proportion of online sales in March.

While the proportion of online sales for department stores more than doubled to 10.1%.

Main image: Shops on Dublin's Grafton Street shuttered due to the coronavirus. Photo by: Leon Farrell/RollingNews.ie