Residents of a flat complex in Dublin say they feel 'left behind' as they continue to experience ...

Residents of a flat complex in Dublin say they feel 'left behind' as they continue to experience issues such as damp, mould and cramped conditions.

Pearse House - located on Hanover Street - is one of the city centre’s oldest social housing complexes.

Conditions in such complexes are set to be scrutinised again this week when a European committee reports on Ireland's progress in improving housing conditions.

The committee found back in 2017 that Ireland had breached the social charter due to inadequate standards for housing.

The Pat Kenny Show reporter Josh Crosbie spoke to residents of Pearse House - many of whom say they're having the same issues they've had for a decade or more.

They also say they're finding it even harder to have maintenance work done recently due to the impact of the pandemic restrictions.

Liz Kelly has been in Pearse House for 27 years, with 13 of those in her current flat.

The @coe European Committee will publish its findings on Ireland’s progress in improving social housing, tomorrow.

I spoke with residents from some of the country’s oldest flat complexes for @PatKennyNT about their concerns. pic.twitter.com/ko5tAJR1p9

She said she paid €4,500 to get the place dry-lined but only got ten years out of it.

Every morning, towels placed near windows are ‘wringing wet’ - with puddles forming every day.

She said: “[The council] says they can’t send anyone out [due to] COVID… only in an emergency. That was six weeks ago.

“I just need it sorted now.”

Jacqueline Hanevy has been in her two-bedroom flat for 17 years.

She explained: “I had three children in [one] room… my eldest daughter got a one-bedroom across the way, which was a big help I have to say.

“Since June, all the black [mould] along the ceiling lodges in the corner and actually drips.

“There’s no privacy whatsoever for the children - if one’s in the shower, the other one has to come out of the room to let them get dressed.

“The privacy is a big, big factor in the home… there are constant rows.”

Geraldine Holland, another long-time resident, says her son's bedroom has had damp issues return despite maintenance work being carried out. 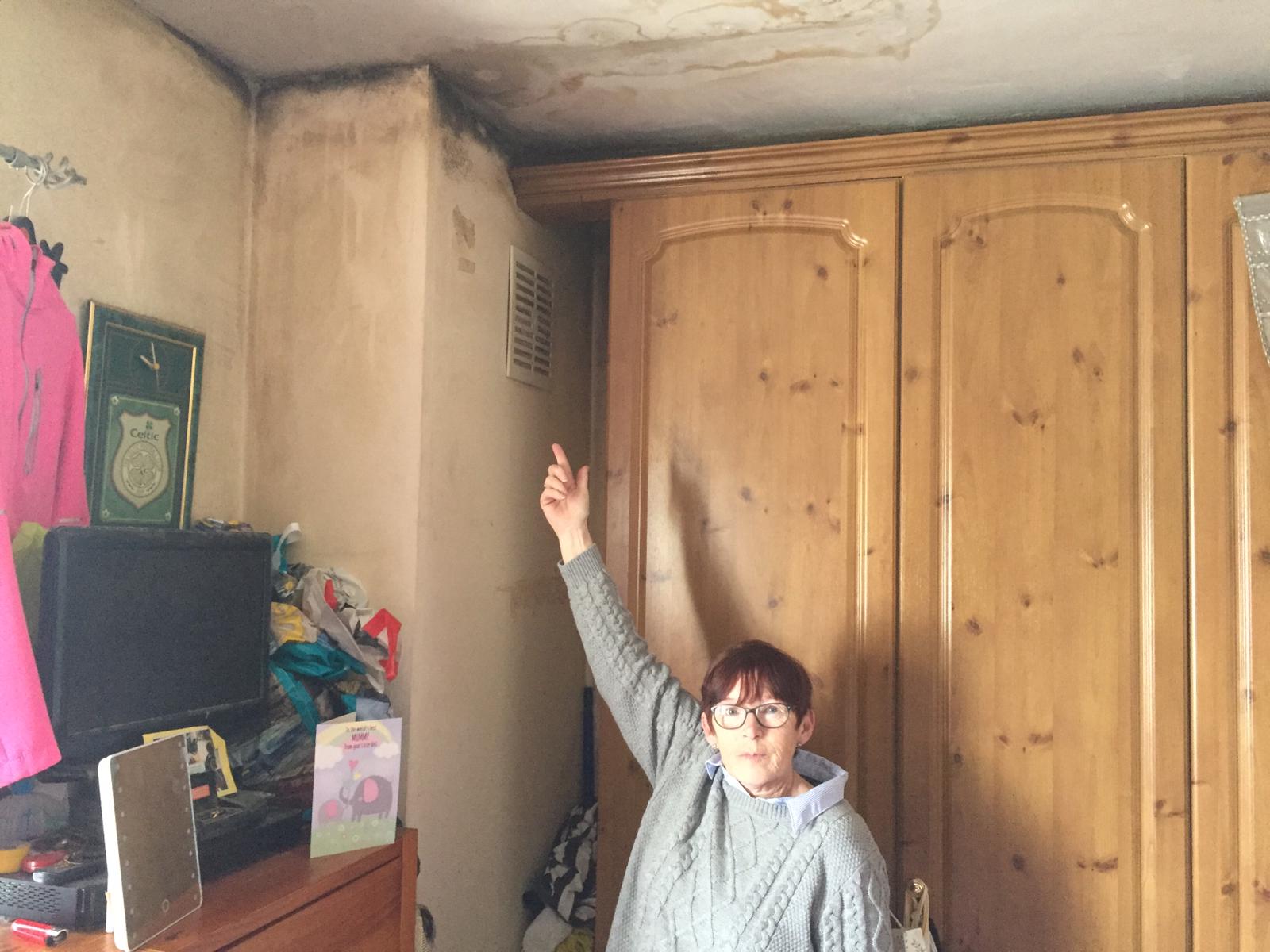 Geraldine told Josh she usually doesn't even contact the authorities as it's so hard to arrange a time for workers to come to carry out the necessary maintenance.

She said: "If you didn't pay your rent, they wouldn't be long about sending letters out to you.

"It's not only my flat - there is a hell of a lot of flats in Pearse House, and some of them could be even worse than mine."

Neil Maloney, chairman of Pearse House Residents Association, says residents would be able to go to the Residential Tenancies Board if they were renting privately if they needed issues sorted out.

Despite the lack of progress in addressing the ongoing issues, he said residents are still paying substantial rents to the council.

He explained: “The rent situation is based on your income coming into the home… so we’re paying big rent here. You’d be paying €150-200 a week - that’s the ballpark figure.

“There’s this illusion that because you live in a council complex, you’re paying little to no rent. We’re paying big rent here."

Neil says Pearse House has been neglected during the economic boom periods.

He observed: “When you look at all the area of Dublin 2… all the lovely buildings that have gone up. But it’s like Pearse House and the other flats within this community have been left behind.

Dublin City Council has said Pearse House is a priority in their regeneration programme, and they are aware of damp and mould issues in the complex.

They say maintenance staff are working with the residents to mitigate the issues through ‘appropriate measures’ such as the installation of modern extraction mechanisms.