A Clare councillor is calling for an extra bank holiday to be added to the 2021 calendar. Fianna ...

A Clare councillor is calling for an extra bank holiday to be added to the 2021 calendar.

Fianna Fáil's Pat McMahon believes an extra day off the working calendar would give the tourism sector a much-needed boost.

He told Newstalk Breakfast he is surprised more groups are not calling for it.

"I'm proposing that the Government make an extra bank holiday - it would be of such a benefit to the hotels, restaurants, gift shops - all the tourism-related products all over the country".

"A lot of people don't realise it, but the amount of people who take long weekends who do book hotels and restaurants - and that would be a huge fill-up to the Irish tourism industry as a whole".

"I'm amazed the Irish Hotels Federation themselves and the Irish restaurants and all the tourism bodies are not pushing for this.

"It's definitely a huge bonus, that they could have a huge extra amount of people away for a weekend which normally wouldn't happen".

It echoes similar suggestions last May, when Kerry TD Brendan Griffin told the Dáil he welcomed any such move to help recovery in the tourism sector.

He suggested the extra holiday could be either early in the year or "at the tail end" of the year. 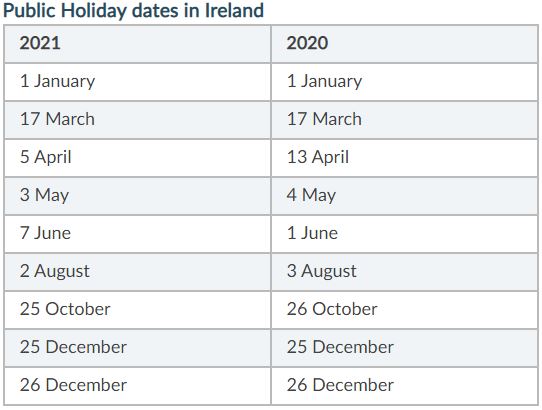 "Personally for a long time I've felt that, coming from a county that's so dependent on tourism, that an additional bank holiday - either at the earlier part of the year, or the tail end of the year - would be very helpful", he said.

"I see the economic benefits that come [with it].

"Probably at the tail end - because with Easter and St Patrick's Day... we have a lot of them there together in the early part of the year".

It comes just days after the organisers of the St Patrick's Festival confirmed there will be no parade in Dublin for the second year running.

Instead, events will be broadcast through a festival TV channel called 'SPF TV' - which will be accessible globally.

In a statement, organisers said: "While we cannot gather on the streets for the St Patrick’s Festival Parade this March 17th, we are reimagining how we bring to life the heart and soul of the national parade, through spectacle, marching bands, pageantry and ceremony, inviting our audiences to participate virtually and enjoy safely from their homes until we can come together again."