Recovery of the aviation sector in Europe could be as far away as 2029, according to a new report...

Recovery of the aviation sector in Europe could be as far away as 2029, according to a new report.

Eurocontrol is a pan-European, civil-military organisation dedicated to supporting aviation.

It supports member states and stakeholders - including airports and aircraft manufacturers - in a joint effort to make aviation safer.

Ireland has been a member of Eurocontrol since 1965.

The body has published its latest forecast, showing there were 65% fewer flights in March to October this year than the same period in 2019.

It examined three potential scenarios: one where a vaccine is rolled out effectively in 2021, another where a vaccine will be available to a sufficient number of people in mid-2022 - which is classed as the 'more likely' outcome - and finally, a scenario where a vaccine has to be withdrawn or is ineffective. 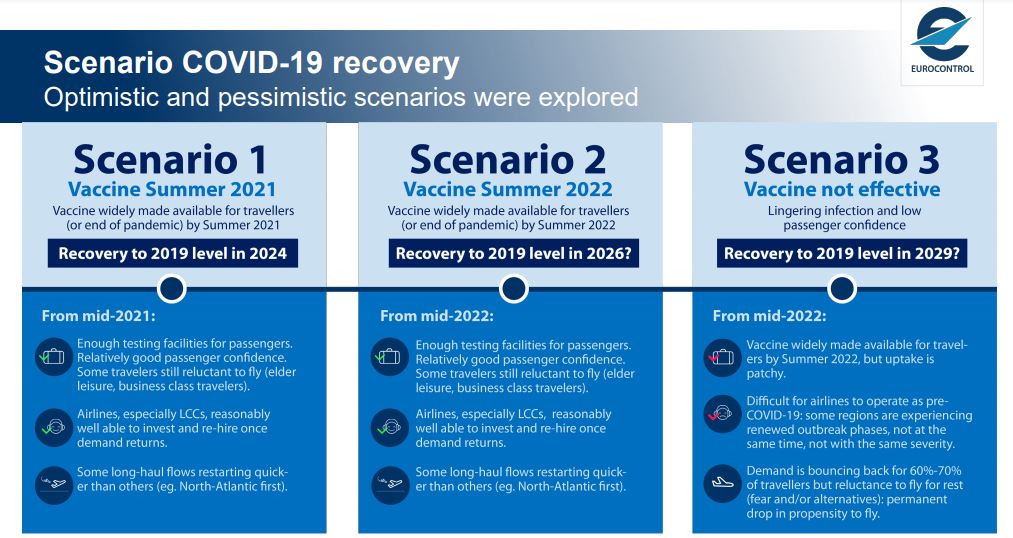 It director-general Eamonn Brennan told Breakfast Business a recovery could still be a long way off.

"It's important to point out that on a normal day in Europe we would do about 37,000 flights.

"At the moment we're doing about 12,000 - so there's been a collapse of the industry completely in Europe.

"We published our annual forecast, and what it says essentially is at the very best, European aviation will recover in 2024 to the levels of 2019.

"In the past, you'll see for instance in the global financial crisis, it took aviation eight years to recover from that.

"Even from 9/11 it took us two years - but this is much more systemic. 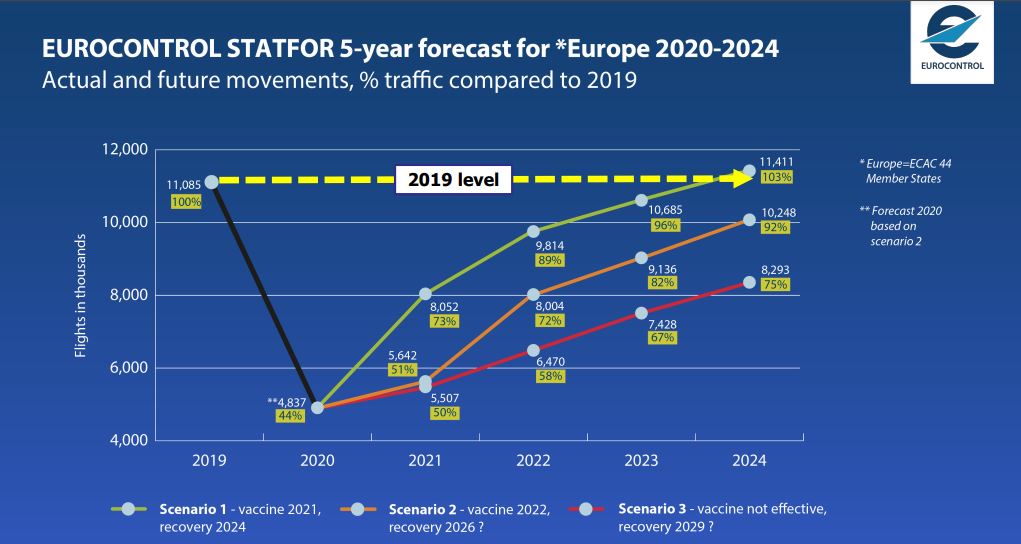 "Some of the factors that we've looked at this time is a large amount of long-haul fleets are being retired - such as 737s and A380s - the airlines are delaying deliveries.

"A lot of the growth is shifting away from aviation and it's shifting to Asia - particularly to China and India.

"The aviation axis is moving east, and of course there'll be a certain amount of aviation suppression as well in terms of the economy.

"All this debt that's currently being piled on by all the economies, ultimately it'll have to be repaid.

"For Europe the big risk that we're facing really is, first of all, looking at airline consolidation - we believe there'll be less airlines - we're looking at a disimprovement in connectivity, probably in the long run prices will start to move up, and of course there's also the impact of Brexit.

"So for an island like Ireland, this poses significant risk".

It comes as the European Union traffic light system for international travel will come into effect in Ireland from Sunday.

The system is based on data published by the European Centre for Disease Control (ECDC).

Countries will be designated green, orange or red depending on several COVID-19 criteria.

Under the plan, regions will be designated green if they have a 14-day rate below 25 and a positivity rate below 4%.

While the Chief Medical Officer Dr Tony Holohan has said international travel could be riskier in the weeks before Christmas than it is now.

He told the Oireachtas Joint Committee on Transport and Communications on Tuesday that international travel is simply unsafe, and the risk is likely to increase in the weeks before Christmas.

"If I was to guess I'd say there probably won't be many countries on 'green' by the time we're talking about Christmas flights.

"I think it'll be difficult for very many countries to be anything other than 'red' at that point in time".

But he said it is impossible to say now if public health officials will be able to change their stance on non-essential travel in time for Christmas.

"I understand completely the sensitivity that there will be for families, and for people who are thinking about these kind of arrangements, wishing to come back together".

"I'm not ruling anything out, I know where we are at the moment and what progress has to be made", he added.

Jim Mansfield Jr found guilty of attempting to pervert the course of justice.