New healthy eating guidelines say young children should be given no more than a ‘tiny amount’...

New healthy eating guidelines say young children should be given no more than a ‘tiny amount’ of sugary or high-fat snacks per week.

It says the likes of sweets, chocolate, biscuits, cakes, fizzy drinks and crisps should not be part of the everyday diet of a child aged 1-4.

The Government's guidelines advise parents who do choose to give their children such food should only offer a ‘tiny amount’ once per week.

It defines a tiny amount as one square of chocolate, three crisps or half a plain biscuit.

Frozen pizza is described as high in fat, so should be limited to 'a very small slice once a week'.

Chicken nuggets, burgers and chips should also be limited to small amounts, while takeaways 'should not be part of your child's diet'.

The guidelines also give other examples of adult portions vs child portions.

As an example, it says children should only have half a banana compared to a full banana for an adult.

Elsewhere, parents are advised to stick to water and milk for drinks, and that sugary fizzy drinks and cordials should be avoided. 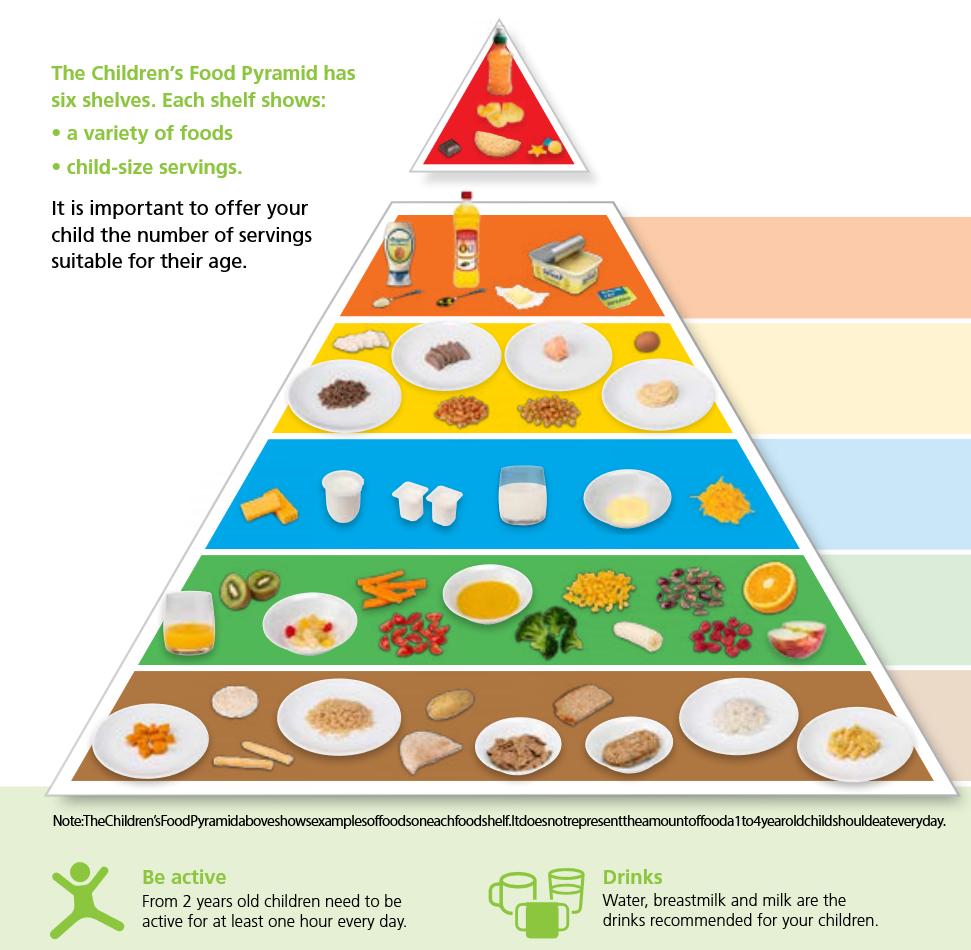 Image via Department of Health

Milk is described as a ‘key food’ in the diets of young children, and they should be offered three servings of milk, yogurt or cheese every day.

It recommends giving children vitamin D drops or liquid every day from Halloween to St Patrick’s day, as they don’t get enough of the vitamin during the winter months.

Red meat is recommended three times a week so children get enough iron, while breakfast cereals with added iron should also be chosen.

Launching the guidelines, Minister of State for Public Health Frank Feighan said: “A critical message coming from these new guidelines is that we really need to recognise that small children have small tummies and as a result we need to be mindful of the portion sizes that we’re giving them when eating.

"The Children’s Food Pyramid will help to assist families to make healthier choices for their child as it provides a range of information on the number of servings from each shelf needed at different ages.

"It also recognises that some children of the same age will need more food and some will need less."

Full details of the guidelines are available on the Government website.