People aged 60-69 have 'much more to fear' from the coronavirus than they do from the AstraZeneca...

People aged 60-69 have 'much more to fear' from the coronavirus than they do from the AstraZeneca vaccine, the HSE's Chief Clinical Officer has said.

Dr Colm Henry is urging anybody in the age group who is offered the vaccine to take it.

Registration for vaccination has now opened for people aged between 65-69, with everyone in that age group to be offered the AstraZeneca vaccine.

However, some GPs say they've noticed an increase in patient anxiety around the vaccination programme over the last number of days.

Out of 14 GPs contacted by Newstalk, five also said they've noticed an increase in vaccine hesitancy.

The change has occurred since NIAC recommended the AstraZeneca vaccine be given to people over the age of 60 only, amid concerns about extremely rare cases of unusual clotting in some people who'd received the vaccine.

On Newstalk Breakfast, Dr Henry moved to reassure people about the safety of the vaccine.

He said: “AstraZeneca vaccine is a really good vaccine. I know there was bad publicity, and talk and concern over what have been a very small number of cases.

“I’d say to anybody aged 60-69 who has been offered the AstraZeneca vaccine: take it. You have much more to fear from the virus than you do from the vaccine.”

He said the blood clotting cases are 'extraordinarily rare', and has 'rarely ever' been reported in older people - hence why its use has been restricted in younger cohorts.

Dr Henry said officials are also looking at whether the gap between Pfizer vaccine doses can be spread out so more adults can get their first dose quicker.

He explained: “For the Pfizer vaccine, if you look at the strict licensing of the drug, you’re allowed to give the second dose up to 42 days… but the current advice we have is up to 28 days.

“The real-world evidence… is [there's] substantial protection after the first dose. That is not an excuse not to give the second dose, but it may well give some leeway.”

In terms of the overall coronavirus situation, Dr Henry said there is lots of cause for optimism.

He said: "You can see it in people’s moods on the streets.

"[It's] the weather, the longer days… but it’s not just the feeling of spring and summer, it’s also the real figures that are starting to show a definitive trend.”

He pointed to ‘real falls’ in the 14-day incidence.

He said the five-day moving average is ‘still high' at 358, but only a fraction of what it was in the middle of January. 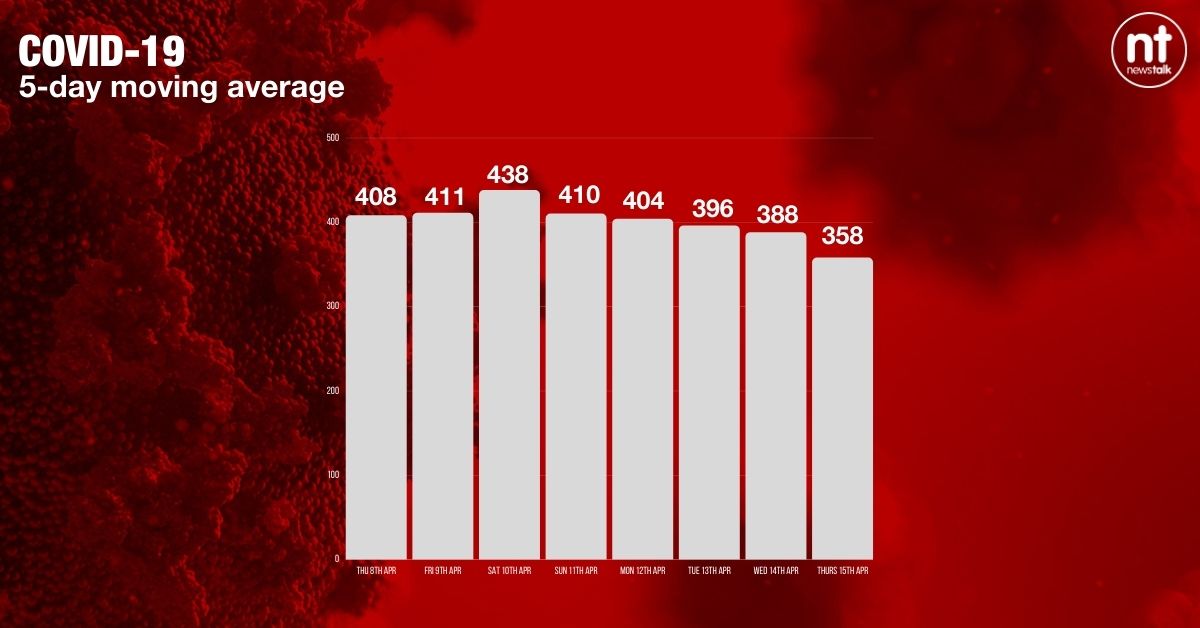 The HSE is still seeing new COVID-19 cases being admitted to the hospital, but the overall number of people in hospital with the virus is the lowest since October.

Saying that the vaccine programme is now paying dividends, Dr Henry added: “We’re seeing a collapse in outbreaks in nursing homes - no outbreak last week, but we had seven a day in January.

“Cases among acute healthcare workers in hospital collapsed from 1,000 a week in January to 11 last week.”