The finding comes from new international research commissioned by UCD.

The study involved a survey of 12,000 in six countries around Europe, including 2,030 in Ireland, to see how attitudes to the Government, science and the pandemic differ.

In Ireland, some 31% of people said the believe the Government exaggerated COVID deaths; however, the responses from four of the five other countries showed even less trust in Government.

Ireland had the second highest trust in the Government mortality figures, just behind Norway.

Please say whether you think the following statement is true or false… The government is exaggerating the number of deaths from coronavirus.

‘The government is exaggerating the number of deaths from coronavirus’ – True or False? 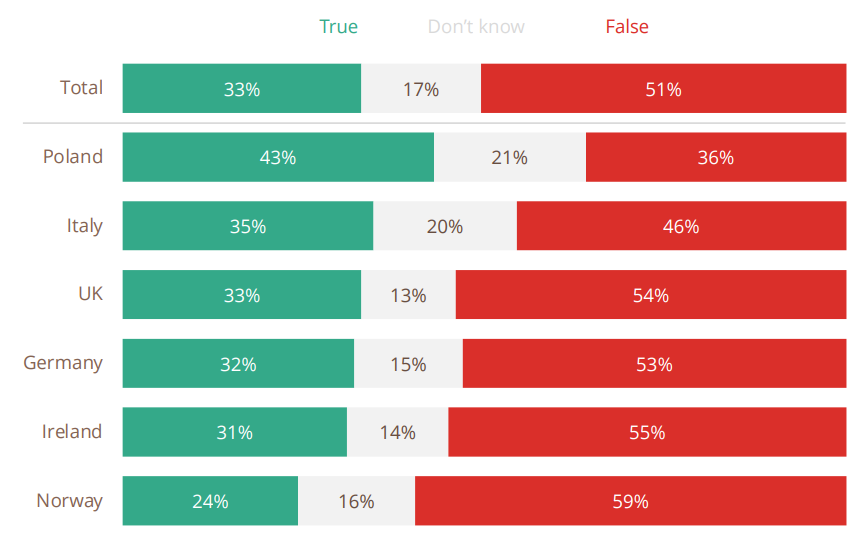 The figure was significantly lower than the 7,108 COVID deaths officially recorded at the time.

Previous studies from HIQA and the Lancet Medical Journal have also shown Ireland’s excess death rate to be far lower than the COVID death count.

Infectious diseases expert Professor Sam McConkey told The Pat Kenny Show the figures suggest at least half of the people who died with COVID in Ireland ‘may not have survived in any case’.

Meanwhile, the Irish respondents also expressed a strong belief in the scientific consensus on vaccines – with three-quarters (75%) saying nearly all scientists agree they are safe.

The UK had the second strongest belief in vaccines at 74%, followed Norway at 70%.

Poland had the lowest belief in the scientific consensus on vaccines at 62%.

Ireland also had the lowest belief in conspiracy theories linking COVID to 5G network radiation – with just over one-in-ten saying they believed in the link.

The UK had the highest belief in the idea – followed by Poland and Germany.

UCD Professor Maria Baghramian, project leader of the study, said: “A key point in Ireland is the publics’ belief in the scientific consensus that vaccines are safe and this is reflected in the very high take up of COVID vaccines here.”

“It’s also very reassuring to see the low prevalence of belief in conspiracies around the pandemic in Ireland, with the lowest percentage (10%) in the countries studied believing that the symptoms of coronavirus are linked to 5G network radiation.”

She noted that Irish people also showed the highest rate of willingness to comply with COVID restrictions, alongside people in Italy.

“However, interestingly, over one third believe that the government is exaggerating the number of deaths from COVID-19,” she said.

“Following the results of the survey we released last week, I think the Irish show an admirably high level of trust in advice given by scientists while distrusting information that comes from the government.”

A separate study published by the project last week found that just under half of Irish people feel the Government is not honest or truthful.