Bus set on fire during evening of violent protests in Belfast

A bus has been hijacked and set on fire in  Belfast during another evening of violent protests i...

Bus set on fire during evening of violent protests in Belfast

A bus has been hijacked and set on fire in  Belfast during another evening of violent protests in Northern Ireland.

The past week has seen several nights of loyalist demonstrations across several towns and cities in the North, with the PSNI describing the violence as 'shameful, senseless and reckless'.

The latest incident saw a bus set on fire near the Shankill Road in Belfast, causing major disruption to many of the city's bus routes.

The CEO of bus operator Translink said the driver of the bus is "very shaken and being looked after by colleagues".

Police said crowds had also gathered in the Springfield Road and West Circular Road areas of the city. 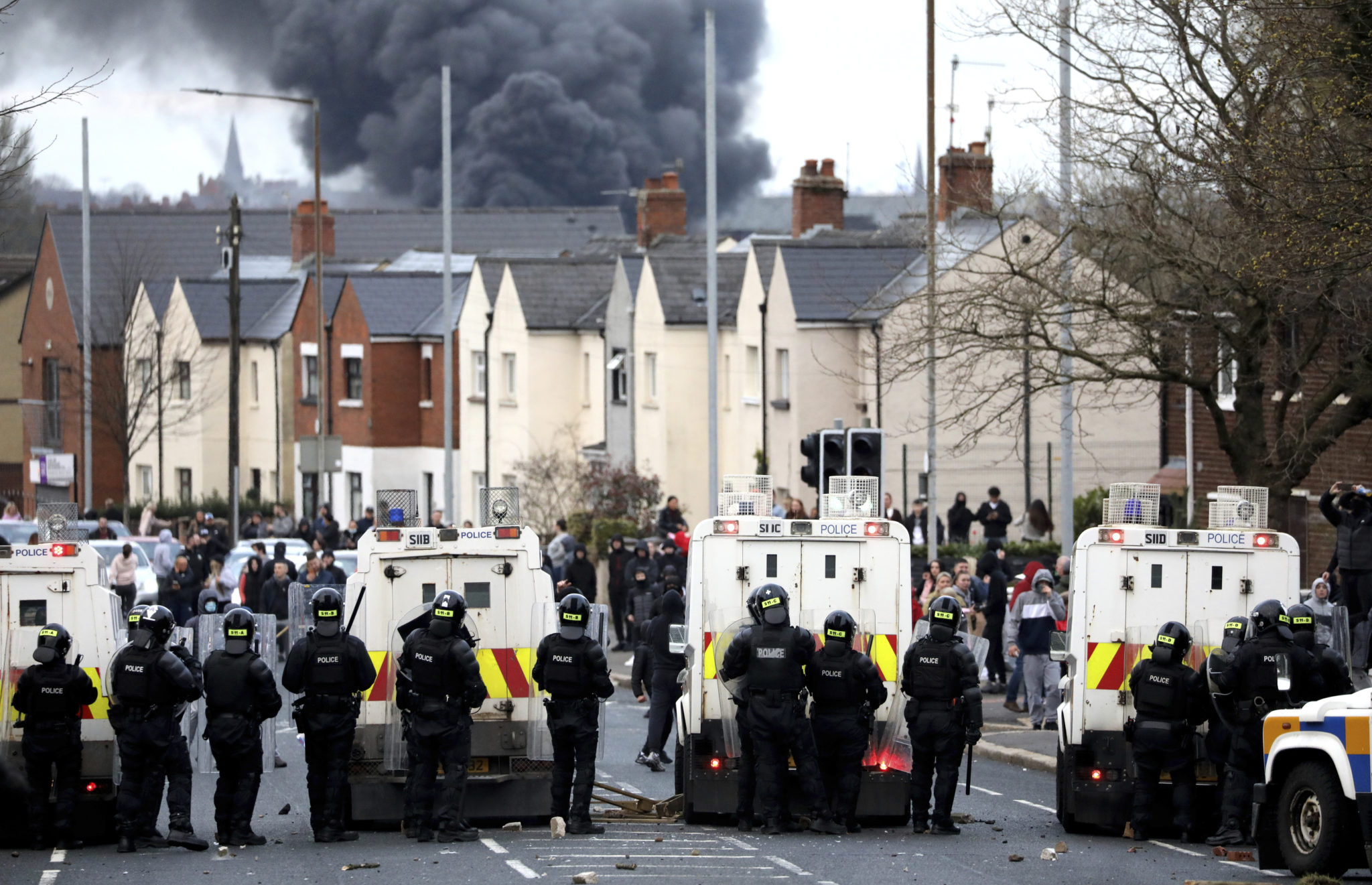 Police form a line on the Springfield road to stop Nationalists and Loyalists attacking each other as a hijacked bus burns in the distance in Belfast, Northern Ireland, Wednesday, April 7, 2021. The police had to close roads into the near by Protestant area as crowds from each divide attacked each other. (AP Photo/Peter Morrison)

Sharing a video of the bus being set on fire, First Minister Arlene Foster said: "This is not protest. This is vandalism and attempted murder.

"These actions do not represent unionism or loyalism."

Meanwhile, a press photographer for the Belfast Telegraph said his camera was smashed as he was 'pulled to the ground' during the demonstrations.

So much for peaceful - I have just been jumped from behind by two males, masked on Cupar Way. One pulled me to the ground and smashed @BelTel cameras. As I fought this one off I was told to fu*k off back to your own area you fenian cu*t by the other. Police informed pic.twitter.com/dkhGjLRYgv

"Unequivocal condemnation needed and protests should be called off immediately - police need support not politicking."

Boris Johnson, meanwhile, said he is 'deeply concerned' by the scenes of violence in Northern Ireland.

He said: "The way to resolve differences is through dialogue, not violence or criminality."

An update from the PSNI earlier this week indicated at least 41 police officers had been injured in the likes of Newtownabbey, Carrickfergus, Derry and Ballymena.

The force has urged "those with influence" to help restore calm.

Main image: The wreckage of a Translink Metrobus on fire on the Shankill Road in Belfast during further unrest. Picture by: Liam McBurney/PA Wire/PA Images