Post mortem being carried out on latest Dublin shooting victim

A post mortem is being carried out on the body of a man, who was shot dead in Dublin on Tuesday. ...

Post mortem being carried out on latest Dublin shooting victim

A post mortem is being carried out on the body of a man, who was shot dead in Dublin on Tuesday.

Hamid Sanambar, aged in his early 40s, was shot in the head while he was standing in the front garden of 22-year-old Sean Little's house in the Kilbarron Avenue area of Coolock.

Less than 24 hours later, his friend Jordan Davis was shot dead in Darndale in Tallaght.

Acting State Pathologist Dr Michael Curtis is carrying out the post mortem on Mr Sanambar at the Dublin City Mortuary.

Speaking earlier outside Santry Garda Station, Detective Inspector Michael Mulligan said: "We are appealing for anyone with information on the deceased man's whereabouts yesterday to come forward.

"We are also interested in speaking to anyone who was in either the Kilbarron Avenue or Castletymon Gardens areas of Coolock yesterday.

"We are particularly interested in speaking to anyone who has information on the silver Toyota Avensis car - 04-D-71806 - and its whereabouts since it was sold on 20/05/19.

"This car was found burnt out yesterday in the Castletymon Gardens area."

The scene on Kilbarron Avenue in Kilmore where a man was shot dead at 3.30 today. It’s not yet known if it’s linked to the murder of Sean Little last week, who’s family home is on the same street. #shooting #Dublin pic.twitter.com/KkPnfjyE3T

With three gangland shootings in north of the city in less than a week, some Coolock residents said they are living in fear.

“It is shocking,” said another. “There are a lot of elderly people, there are a lot of youngsters; there is a local school just around the corner; lots of people coming and going to the local shop.”

“It is a lovely place to live and it makes it hard to believe that this kind of thing can happen on your doorstep.”

"Hopefully it stops," said a third. "Hopefully they can put a stop to it. But I don't think it will stop; it is just going to continue." 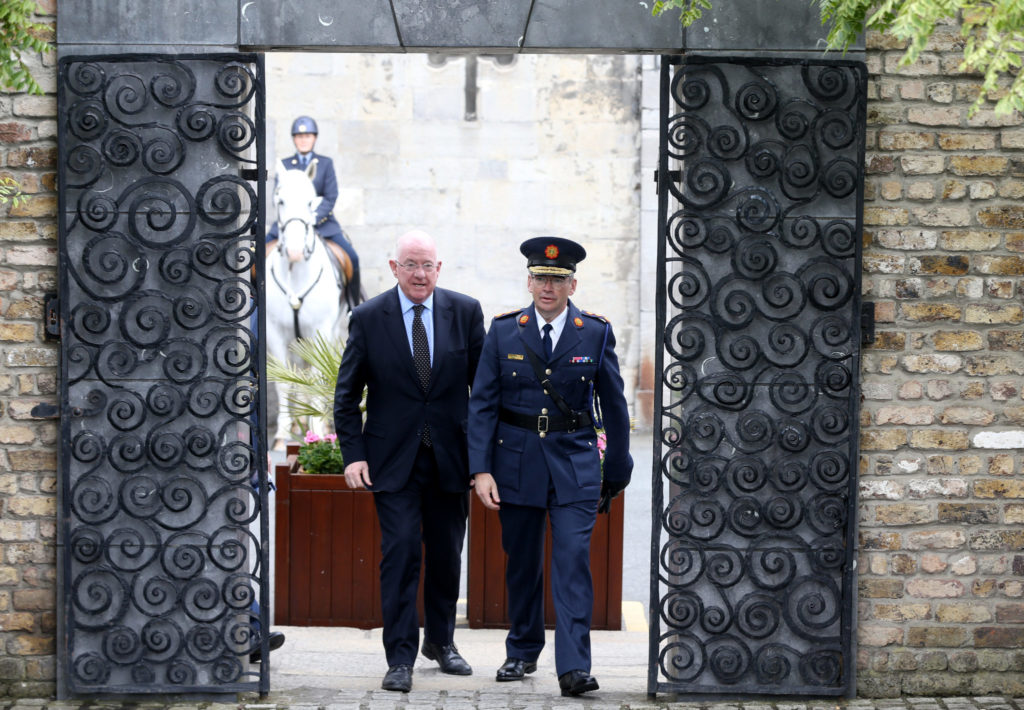 Justice Minister Charlie Flanagan with the Garda Commissioner Drew Harris at the Memorial Day for Members of An Garda Síochána at Dublin Castle, 18-05-2019. Image: Sam Boal/RollingNews

Justice Minister Charlie Flanagan said he has spoken to senior Gardaí about the wave of violent crime in the area.

He called on the local community to cooperate with investigating Gardaí.

“I am very concerned at three murders within a short space of time in the same area,” he said.

“I have discussed the matter with senior Gardaí. I have every confidence in the Gardaí to bring those killers to justice.

“I am calling on anyone in the local community with any evidence or any information to work closely with the Garda Síochána.”

Independent Councillor John Lyons said that people in the area are terrified – and called on the Garda Commissioner and Justice Minister to outline their strategy for tackling the wave of violent crime in north Dublin.

“Three lives have been taken,” he said. “There seems to be some kind of a feud going on in relation to drugs.”

“I am asking that the Garda Commissioner Drew Harris and the Minister for Justice Charlie Flanagan come to the area, speak to the people in the area; tell them what the plan is; what is the strategy; listen to the people and listen to their concerns.

“Because right now, nobody in this area feels like they are safe.”

Gardaí said three men wearing balaclavas were involved in yesterday’s attack. They left the scene in a silver Toyota Avensis with the registration number 04-D-71806.

The car was found burnt out in the Castletymon Gardens area of Coolock 15 minutes after the shooting - at around 3:45pm.

Gardaí are investigating whether the three killings were linked.

An incident room has been set up at Ballymun Garda station and Gardaí are appealing for witnesses to come forward.

Investigators are particularly interested in speaking to anyone who was in the Kilbarron Avenue or Castletymon Gardens areas of Coolock between 3:15.00pm and 4.00pm on Tuesday - especially road users who may have dash cam footage.

Here are the new COVID restrictions coming into force today

Storm Barra: Some schools to remain shut as 'severe and damaging' system arrives