New IRA have been 'heavily infiltrated by MI5'

The New IRA have been “heavily infiltrated by MI5” and are “limping along”.

New IRA have been 'heavily infiltrated by MI5'

The New IRA have been “heavily infiltrated by MI5” and are “limping along” a journalist from the Belfast Telegraph has said.

The dissident republicans are suspected by the PSNI of being behind a number of attacks in Northern Ireland recently; over the weekend a “viable explosive” was found in Strabane and a delivery driver was forced to drive a suspicious object to a police station in Derry.

While most republicans gave up on violence as a means to achieve Irish unity after the Good Friday Agreement, a small minority were unable to reconcile themselves to the peace process.

Such tactics, Alison Morris believes, are counter productive and it should be “quite obvious” to anyone who wants a united Ireland.

“Anyone with any sensible political thinking would know that Brexit and actually the current disarray of the Tory party in Westminster - all of those things play into the United Ireland campaign and the calls for a border poll,” she told The Pat Kenny Show.

“Which is going to happen in maybe the next five years - possibly 10 years but we will get a border poll.

“And that’s why groups like Óglaigh na hÉireann, who were very active at one time and were carrying out car bombs on police officers, they called a ceasefire in 2019 because the political climate had changed and there was no longer any need for them to be in existence.”

British intelligence have long taken a keen interest in the organisation and Ms Morris says their efforts are paying off.

“The New IRA are limping along, despite being heavily infiltrated by MI5 and have been from day one,” she said.

“In August 2020, the alleged leadership of this organisation were arrested and placed on charges of faced on two meetings that were organised by a guy called Dennis McFadden who’d been a member of this group for the 10 years of its existence but turned out to have been an MI5 operative that entire time.

“So, the evidence would indicate that they have been heavily infiltrated most of that time.” 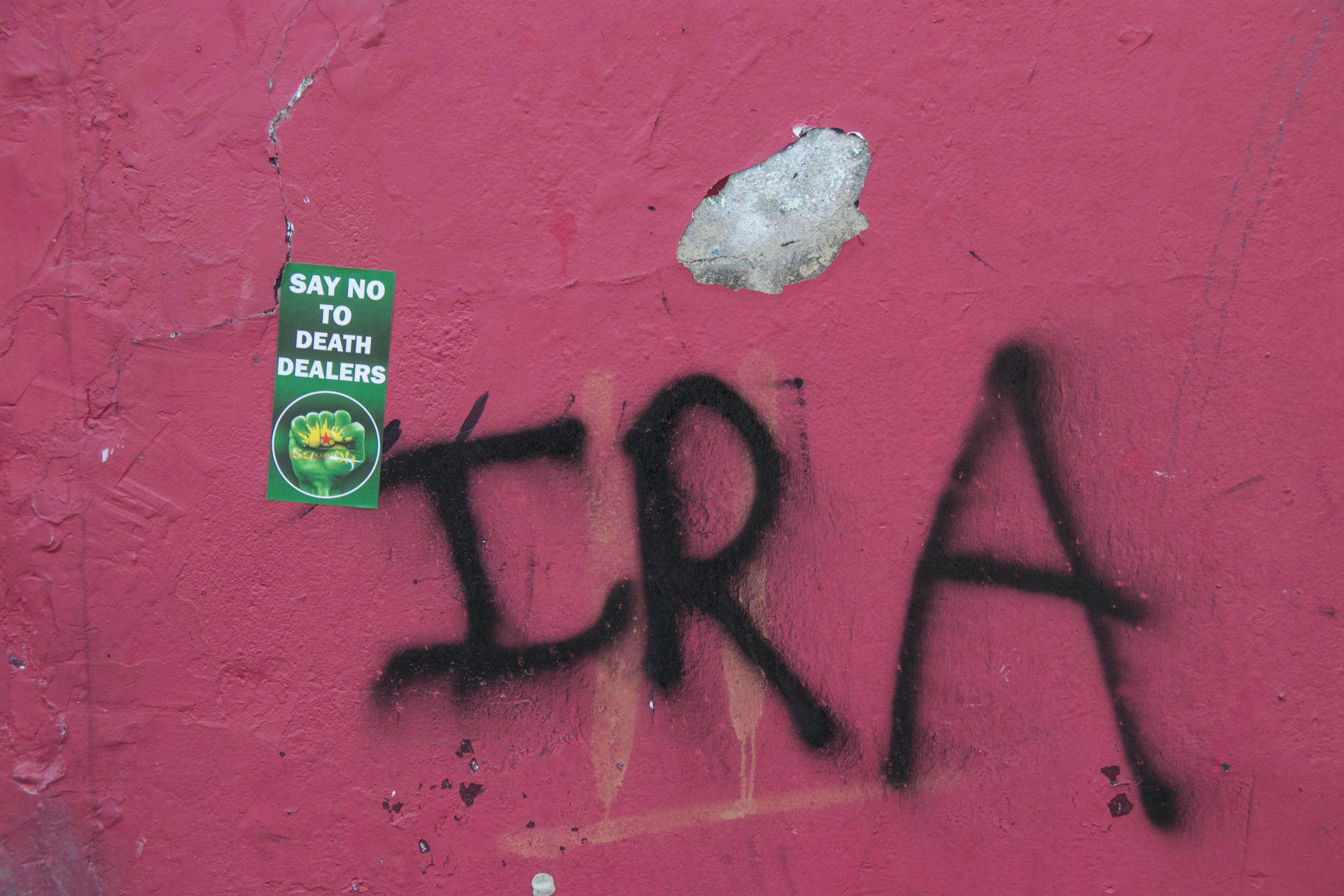 W8GG5W Say no to death dealers

The group have a political wing called Saoradh but Ms Morris says their support too is “dwindling” and their most recent conference attracted only a couple of dozen attendees.

“That’s mainly due to the murder of Lyra McKee, things like that that have turned people against them. The fact is there’s no reason to exist anymore,” she said.

“Anyone who is wedded to the idea of a united Ireland can see a trajectory in place, a political strategy to achieve that in the future.”

The way to tackle paramilitary recruitment, Ms Morris believes, is to offer young people an alternative to violence.

“I don’t think it’s any accident that the only place that this group has any support left is in the North-West because it’s an area that didn’t really feel the dividend of peace in terms of investment and infrastructure.

“There’s a very simple formula for keeping young people away from crime and keeping them away from trouble and that’s to give them hope.

“If you give them educational opportunities, employment opportunities, a person’s going to have zero interest in being sucked into a group that’s likely going to leave them dead or in prison.”