McAleese: Good Friday Agreement would not have passed with Brexit

Former President Mary McAleese has said if Brexit had been contemplated at the time of the Good F...

McAleese: Good Friday Agreement would not have passed with Brexit

Former President Mary McAleese has said if Brexit had been contemplated at the time of the Good Friday Agreement, the deal would probably not exist.

She was speaking on Friday at an event for the DCU Brexit Institute.

Mrs McAleese opened a book conference entitled 'Brexit, the terms of withdrawal and the framework of future EU-UK relations'.

Her keynote speech was followed by four panel discussions on the themes of the process, the withdrawal agreement, the framework of future relations and the challenges.

Mrs McAleese said the process for the UK to leave the EU has been like "watching a form of political necrotizing fasciitis".

"We know that it rendered the world 'meaningful' completely meaningless."

"We would want to be in absolutely no doubt about the importance of our shared membership of the European Union in promoting healthier and more effective relationships between Ireland and the United Kingdom.

"We would also want to be in no doubt that in future, the absence of that everyday contact - day-in-day-out - around the many, many manifestations of the union table that will be an irreplaceable loss... unless we infill with something equally strong."

On the Good Friday Agreement, Mrs McAleese said: "It never contemplated, much less provided for, a situation in which the United Kingdom would withdraw from the European Union.

"That was not within people's contemplation.

"Indeed, had such an idea been within contemplation, I'd say there is considerable doubt as to whether the Good Friday Agreement in its present format would have got over the line.

"It would have encountered considerable difficulties - and indeed it probably would only have got over the line had the provisions that the Irish Government has now put into the withdrawal agreement been put into the Good Friday Agreement".

She also said the most important of those provisions is an agreement secured with the EU - that if partition was ended, Northern Ireland would seamlessly re-enter the bloc.

But calling the Irish border backstop "essential", she said: "It is designed in the hope and expectation that it will never need to be used". 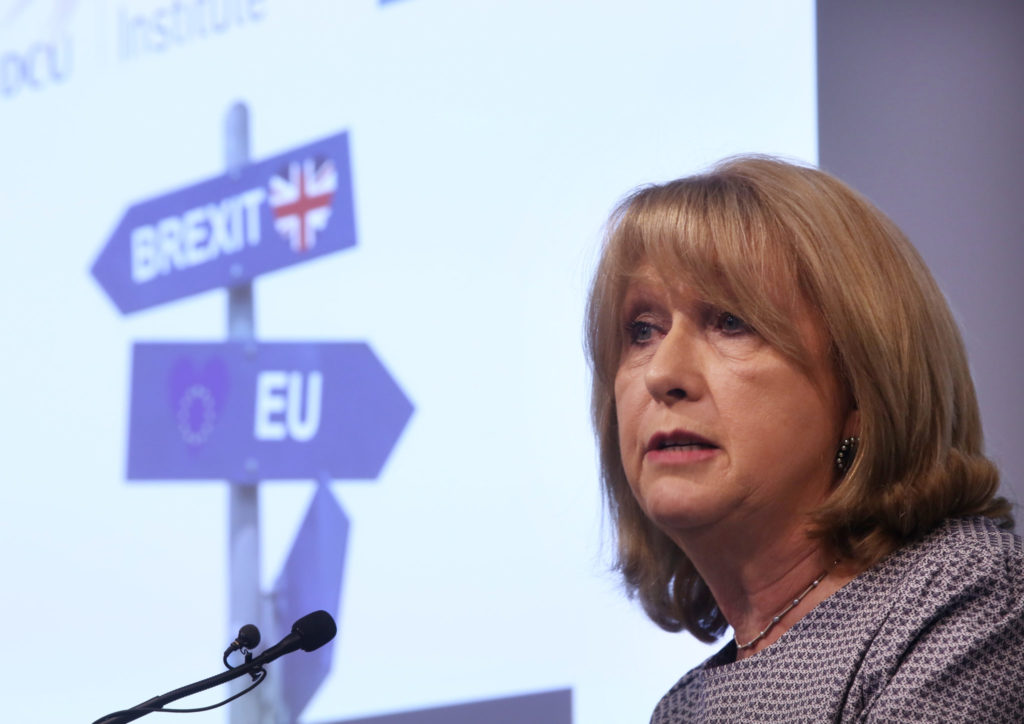 And Mrs McAleese said the issue of a united Ireland is "on a horizon ahead of us".

On the day that Britain was supposed to leave the EU, Mrs McAleese said the Brexit process is driving a constitutional change both North and South.

Mary McAleese said it has always been known that the issue would come onto the agenda.

"The issue of the end of partition would come on to the agenda, driven by demographics.

"The demographics in Northern Ireland are changing, rapidly, towards a Catholic/nationalist majority - that's a reality that has to be taken into account.

"But Brexit put a different spin on things".

"I want to wish our United Kingdom neighbours well as they exit the European Union.

"I am frankly heart sorry to see them go, for things will not be the same."

"Like many I harboured the hope that somehow the United Kingdom would step back from the brink and re-commit to the ideal and the idea of the European Union - in my view, the greatest and the noblest political undertaking ever envisaged and realised in human history.

"That's a description that is unlikely to be ever attached to Brexit".

The DCU Brexit Institute operates as a hub for the analysis of Brexit, both from an academic and a policy perspective.