The Government is defending changes to the COVID-19 vaccine rollout, amid strong criticism from s...

The Government is defending changes to the COVID-19 vaccine rollout, amid strong criticism from sectors that believe they should be given priority.

The new model will see people vaccinated based on age after the over-70s, medically vulnerable and those with underlying conditions have been vaccinated.

It means groups like gardaí, teachers and family carers that had been pushing for early vaccination now won't get it.

The changes will come into effect once over-65s, people with underlying conditions and residents of long-term care facilities are vaccinated.

People aged 64-55 will be vaccinated first under the new plan, with younger age groups vaccinated in descending order. 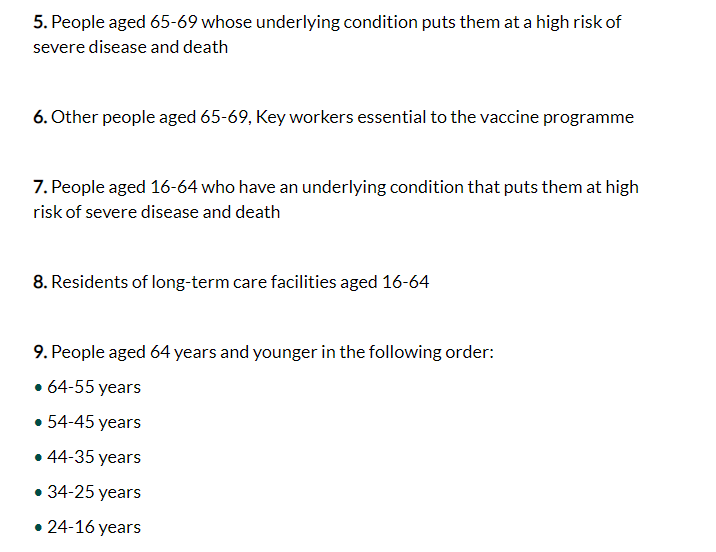 However, there has been strong criticism of the move from unions and organisations representing workers who were previously expected to be prioritised ahead of the general population.

GRA President Frank Thornton said the treatment of frontline gardaí has been 'disgraceful'.

He explained: "Once you account for age and underlying conditions - and those are already taken [into] account in the way the prioritisation framework is set out - there's no evidence that any particular occupational group stands out as being at higher risk of severe outcomes from COVID-19."

The Taoiseach pointed to challenges that have already been experienced as they work to vaccinate people with underlying health conditions.

He suggested that older teachers, gardaí and other professionals will now get vaccinated more quickly than they would have under the previous plan.

He stressed that NIAC has been clear that the new model is a 'better way to do it from a health perspective'.

The Government says it still plans to administer around three million vaccine doses between April and June, saying 80% of adults will have received at least one dose by the end of June.

The announcement of the changes came alongside a series of changes to the current coronavirus restrictions, with some measures now due to be eased between now and the end of April.