It would mean offering those who lose their jobs between 50% and 90% of their previous pay for the first few months of unemployment.

Unemployment benefits should be linked to previous pay for the first several months of unemployment, unions say.

ICTU wants to see the flat-rate jobseeker's benefits systems replaced with one that would ensure someone who loses their job still receives a majority of their previous income.

Currently, anyone eligible for jobseeker's benefit and was earning more than €300 a week is entitled to €203 per week.

Under the current system, someone who was earning €27,000 per year would receive just 39% of their gross wage.

Unions want to see the approach brought more in line with other EU countries - where someone receives a percentage of the pay they were receiving before they lost their job.

They say the need to create the Pandemic Unemployment Payment showed how a flat-rate benefit doesn't provide "adequate income protection for workers when out of work".

He said the rates received differ from country to country. 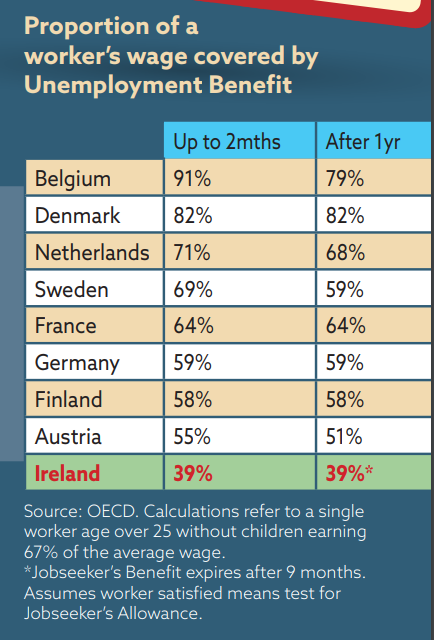 He said: "You would receive anywhere from 50%, 70%, 90% of your previous pay… say for the first three months, or first six months.

“Then it would be slowly tapered down until you reach the social protection minimum in a year or a year and a half.

"We’re an outlier: we’re the only country that doesn’t do it this way. We just have a flat rate system.”

Mr Taft said there's a number of benefits to the approach seen across Europe.

It offers help with household budgets in the event of a sudden job loss, so the individual or family's living standards "don't completely collapse".

It also allows them to maintain their levels of consumer spending, meaning other businesses don't lose out.

Mr Taft noted: “If I am certain I am going to receive half or three-quarters of my income… I can maintain spending which would be higher than it would have been if it was a flat-rate, and allows me time to actually find a job that’s suitable.”

He said: “There’s nothing to suggest - both in our history and in the studies that have been done - that people would just prefer to lie around the house, receiving money.

"They want to go out and work - that’s what fulfils them. Work is more than just money.”

Unions have no exact estimates about how much the change would cost, due to the lack of data around the income of those who lose their jobs.

However, Mr Taft believes around €500 million per year would be a "good bet" for a likely cost - suggesting that cost "would be fairly small for the benefits you’d receive".

He said it would be paid for by measures such as a small increase (less than 1%) in employers' contribution to PRSI, as well as the continued economic growth that would continue if recently unemployed people didn't suddenly lose the majority of their income.

High earners could get larger welfare payments under new plans