Conradh na Gaeilge was inundated with replies when they announced in the spring that they were offering scholarships to Ukrainians who wanted to learn Irish.

“A language influences how you perceive the world. If you lose it, that is just the first step towards losing who you are.”

It’s a cold autumn evening in Dublin and Khadizha is one of a number of people gathered for an Irish class at Conradh na Gaeilge’s headquarters on Harcourt Street.

A rainbow flag hangs on the classroom door and trad music on the radio plays in the background. Most of the class are non-nationals but none have as dramatic a reason as Khadizha for learning Irish.

“Our village was destroyed, our house was destroyed,” she explains, “and because, I was alone, it was easier to take refugee trains to cross the border.”

As the crow flies, Khadizha’s home city of Izium is some 3,600 kilometres from Dublin, but it is a mere 40 minute drive from the Russian border.

After Putin ordered his troops into Ukraine, she fled west.

Few would question that it was a sensible choice; Izium endured five months of Russian occupation and, after it was liberated last month, a graveyard with over 400 bodies was found.

Locals have since spoken of torture and rape at the hands of Russian forces. 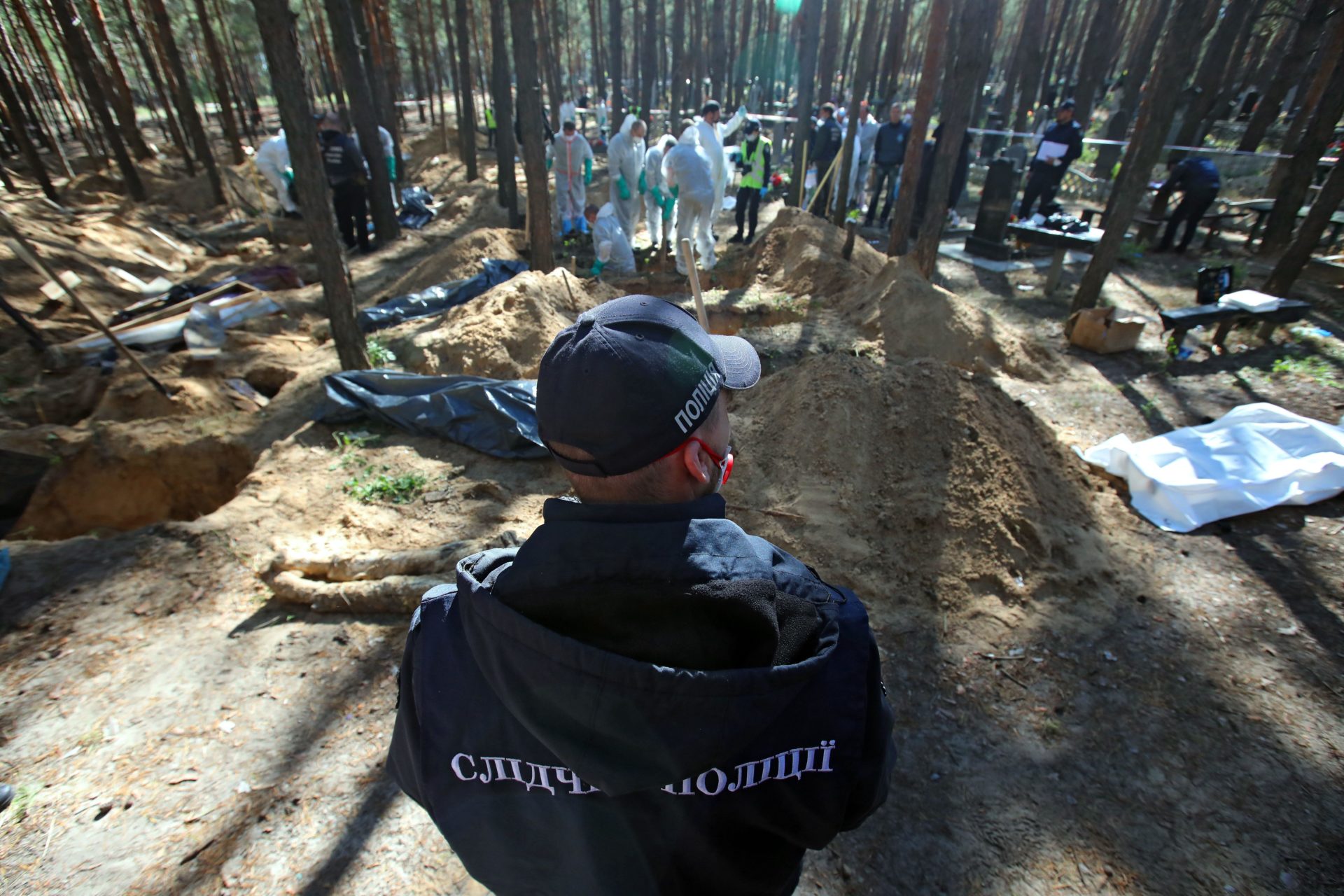 IZIUM, UKRAINE - SEPTEMBER 19, 2022 - A police investigator is pictured during the exhumation of the bodies of Izium residents tortured

In March, the European Union gave Ukrainians the right to seek refuge in the bloc and Khadizha chose Ireland, feeling Irish people would empathise with Ukraine’s plight.

Certainly, there are a number of common themes running through the histories of Ukraine and Ireland; both have been invaded multiple times by their larger neighbour and Ukraine had its own Great Famine, with millions dying during the Holodomor of 1932-33, when the country was part of the Soviet Union. 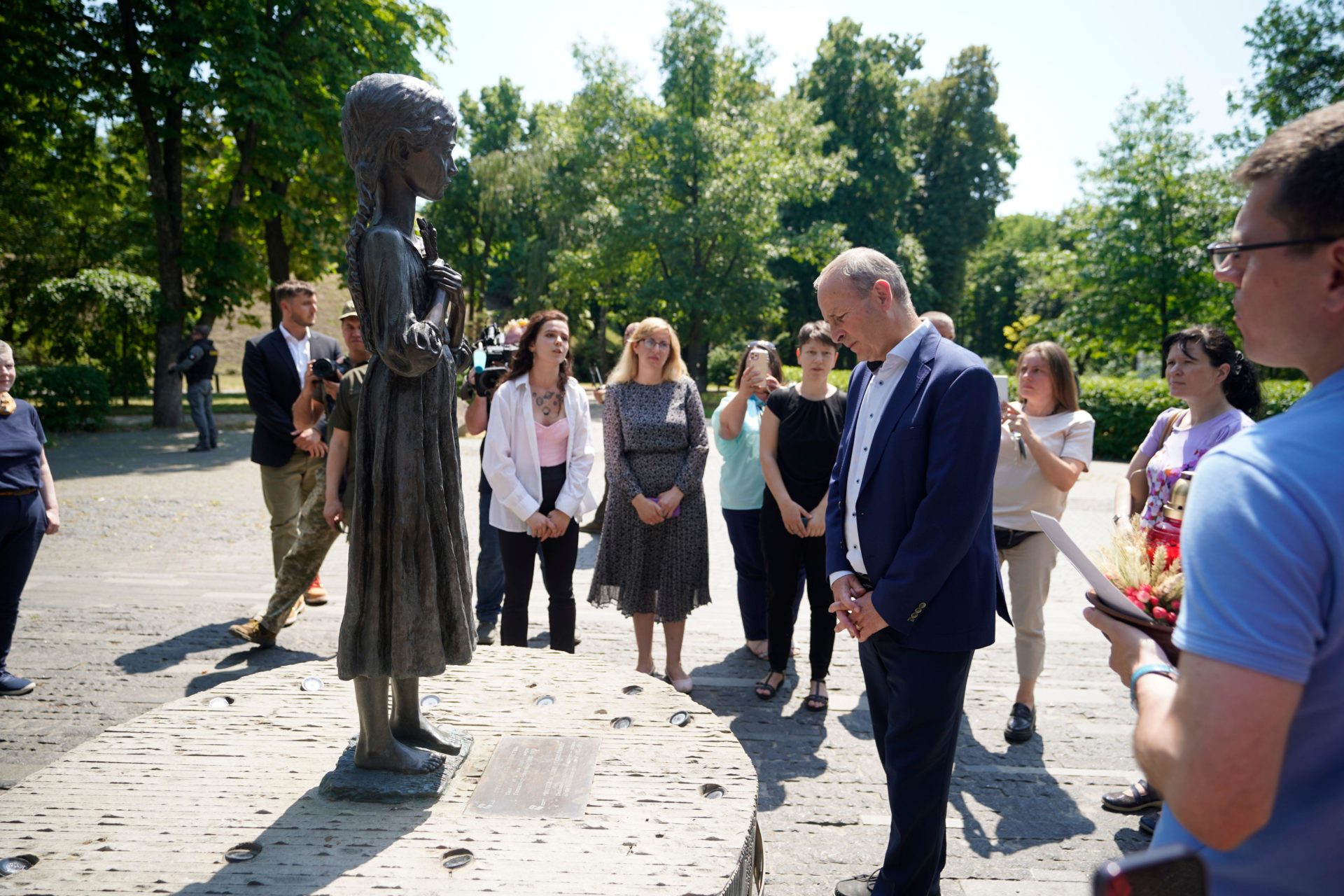 Taoiseach Micheál Martin and his entourage observes a minute silence at the foot of the Bitter Memory of Childhood statue, which commemorates the victims of the Great Famine in 1932-33, at the Holodomor Victims Memorial in Kyiv. Picture date: Wednesday July 6, 2022.

“I think we might have this implicit cultural understanding and connection; the trauma is generational when it comes to colonialism and imperialism aggression," Khadizha explains.

"That’s why I feel people would understand me here, better than any other country in Europe.

It is this shared cultural understanding that inspired her to sign up for the class. A translator by profession, she speaks English quietly but with the grammatical precision of a native speaker. Irish will be her fourth language and, just a few short weeks into the course, she and her fellow students are already grappling with the nuances of the vocative case and the correct use of the séimhiú.

“So what am I going to do there?" teacher Críostóir Ó hUigín asks the class, gesturing at the Irish word for ‘doctor’ on a whiteboard.

This week’s class, he admits afterwards, has been trom - or 'heavy' in English. Irish grammar is often complex but its mastery is essential for those who wish to progress beyond a rudimentary cúpla focal.

From Mayo originally, Críostóir grew up speaking Irish with his family and has made a career out of teaching it. To him, having a Ukrainian woman in the class is nothing unusual.

“I find it just fine,” he says matter of factly.

It is, of course, possible to live in Ireland without any knowledge of the State’s first official language but Críostóir believes those who do that are missing out.

"Even for people that are coming in that don’t engage [directly] with the language, they almost always will because it’s in many common words and then they have questions… Foreigners can surprise Irish people and I think, sometimes, they surpass us.”

Questions of language and identity are familiar to all Ukrainians. The proverb Tír gan teanga, tír gan anam is an Irish one meaning that ‘a country without a language is a country without a soul’ - but it could just as well be a Ukrainian one. For many patriots, the language and their sense of nationhood are inherently linked - even if their command of Russian is just as fluent.

Before the invasion, around 68% of people in the country spoke Ukrainian as their first language, while 30% ticked the census box for Russian. Millions speak both languages comfortably and interchangeably in their daily lives but there has always been a simmering tension between the two groups. Ukrainian speakers are generally more western and European minded, while many Russian speakers look to Moscow for their cultural cues.

In January this year, a new law came into force that mandated media outlets be published in Ukrainian. No exemption was made for Russian with authorities tartly noting the “European ambitions of Ukraine and… the century of oppression of the Ukrainian language in favour of Russian” as justification.

Doubtless, it was legislation like this that Russia’s Foreign Minister had in mind when he asked how Britain would feel if the Irish Government decided to ban the use of English.

Perhaps this is why Conradh na Gaeilge was inundated with replies when they announced in the spring that they were offering scholarships to Ukrainians who wanted to learn Irish.

“A woman who was dealing with refugees in one of the hotels messaged me and said that she had a woman who was really interested in learning Irish,” Aisling Ní Dhonnabháin of Conradh na Gaeilge recalls.

“Once I put the message out on Twitter, so many people got in touch saying that they were hosting refugees who were interested in learning Irish as well.

“We organised the first class here in Uimhir 6 and I think we had a maximum of 15 people and we had to keep upping the amount of people that we could let register because there was such a massive amount of interest.”

On average, it takes 480 hours to achieve a basic level of fluency in any language, something that usually requires years of study. Most Ukrainians have no idea how long they will be in Ireland and most want to return home as soon as it is safe to do so.

“It depends when it’s over,” Khadizha says when asked about her future intentions.

“Because I don’t have a home anymore. My family doesn’t have anything anymore.

“It depends whether it escalates to the point where infrastructure is completely destroyed.

“I want to go home, I miss home but it’s too dangerous there.”

'The best way is to normalise it' - Irish language quarter for Dublin city?

Call for teaching Irish to change, as it is dropped from Garda recruitment