A People Before Profit TD has defended her party not applauding Ukrainian President Volodymyr Zelenskyy's speech to the Joint Houses of the Oireachtas earlier.

Mr Zelenskyy used his speech to thank the people of Ireland for their support since the Russian invasion began and to welcome a "new age of understanding" between the two countries.

He also warned that Ukraine "cannot tolerate" any more indecisiveness on sanctions against Russia given everything his country is going through.

While TDs stood up and clapped after the address, four People Before Profit members did not join in the round of applause.

Brid Smith, PBP TD for Dublin South-Central, told The Hard Shoulder why they did this.

"We stood up today in solidarity with the people of Ukraine, not clapping the president because of his calls today for more stringent sanctions on the Russian people

"And also previous calls for NATO to be involved to create no-fly zones.

"It's not a mortal sin - I mean we stood respectfully, with him and with his people, but we don't agree with his sentiments on everything."

Put to her that clapping will not change sanctions, she says: "There's a position we hold which is that we don't believe, in this instance, that sanctions will actually stop Putin doing the horrible, brutal, murderous things that he's doing in Ukraine. 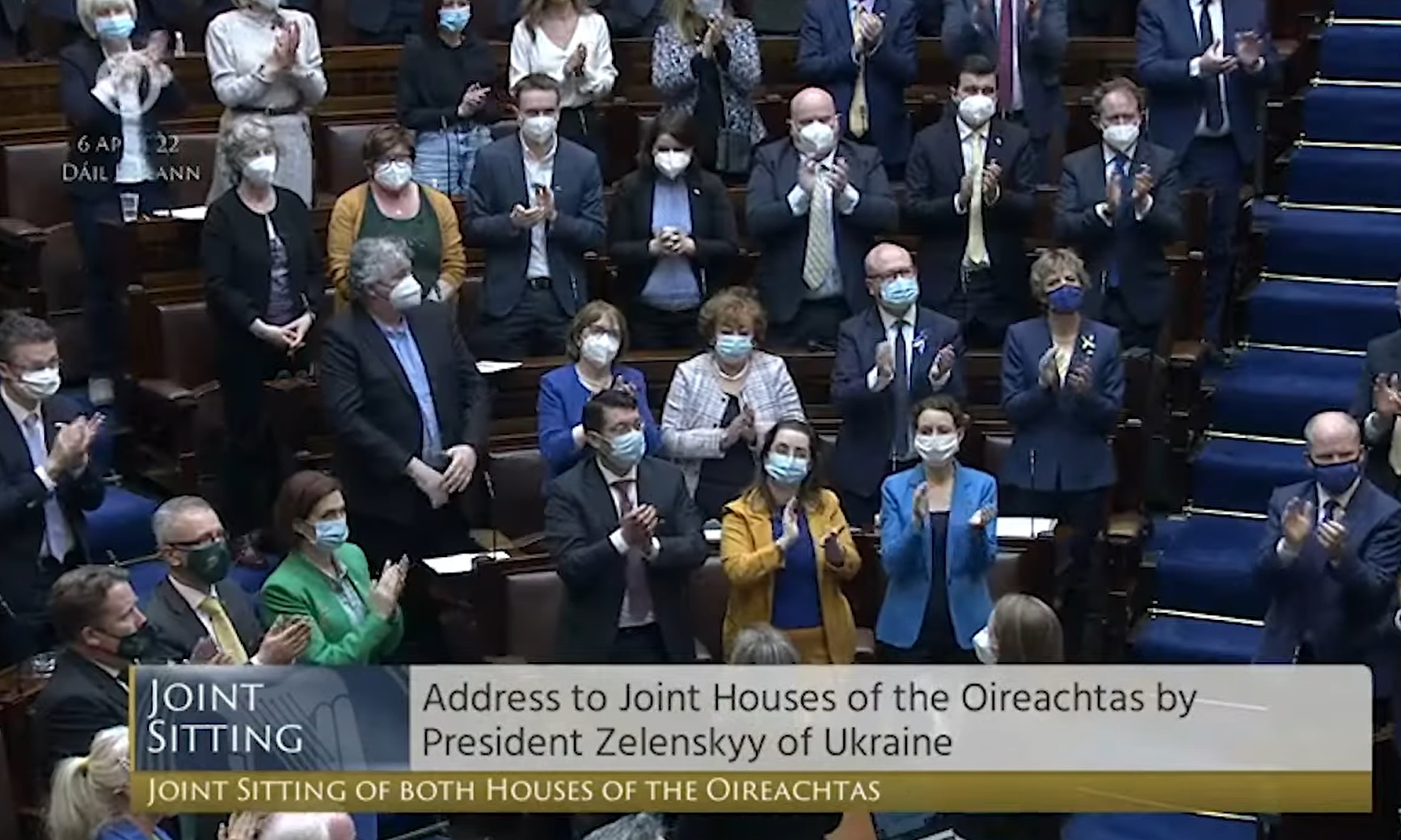 TDs stand and applaud in the Dáil chamber. Picture by: Oireachtas

"They will hurt, and severely hurt, the Russian people - as the sanctions against the Iraqi people did after the Kuwaiti invasion.

"In that circumstance in Iraq [sanctions] killed, directly killed, about 500,000 Iraqi babies and children.

"There was a complete lack of medical support, simple antibiotics, medicine to deal with diarrhoea, etc".

Shen adds: "If we try to penalise the Russian people, we will throw them further into the arms of Putin - rather than throwing them in opposition to him.

"And that would be, if you like, a drive in the wrong direction".

Meanwhile the chair of the Oireachtas Foreign Affairs Committee has questioned the effectiveness of sanctions against Russia.

Charlie Flanagan, a former foreign affairs minister, says he hopes the Government will respond to requests from President Zelenskyy to persuade others to tighten restrictions.

But he admits that sanctions so far have not been as effective as hoped.

"He had an ask of Ireland, and I hope that we will continue to stand up to the plate, as far as our contribution is concerned as a member of the European Union and as a small state on the western periphery of Europe.

"We have an important role to play, we have been playing it but we need to continue to play it."

He says Ireland should be lobbying others for more stringent sanctions against Russia.

"It appears so far over the last month that the sanctions have not been as biting as they might be.

"We negotiate and discuss and sit down with 27 colleagues in order to satisfactorily introduce a set of economic sanctions, which is one aspect of what we can do.

"We see the European Union actually setting aside internal divisions to speak with one voice.

"That'll be more difficult now, but we need to continue to try and find that one voice - for example, energy, oil".

"How can any democrat be neutral in the circumstances of the murder and rape and torture and brutality that we see on our screens, unfolding before our eyes every day?

"And we had a witness to that testimony this morning in the form of the President of Ukraine.

Smith: 'Why is the Government waiting to reward key workers?'