The return of common cranes to Ireland is a sign that our environment is improving, according to ...

The return of common cranes to Ireland is a sign that our environment is improving, according to one wildlife expert.

It comes as a pair of cranes, nesting at a site on a rewetted bog, could be the first to successfully breed in Ireland in 300 years.

Bord na Móna said the site held two previous breeding attempts, in 2019 and 2020, but these were ultimately unsuccessful.

The location of the nest is being kept confidential in order to protect and conserve the birds. 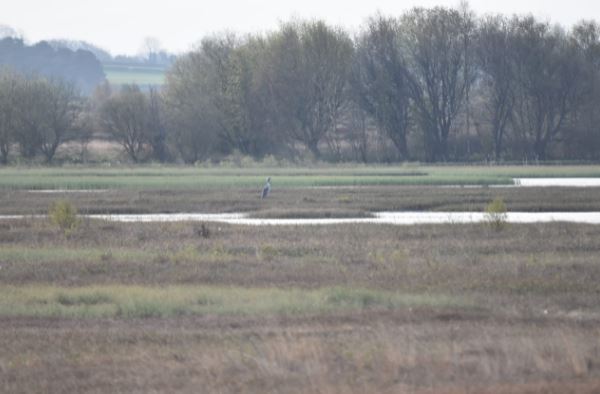 A crane is seen on a rewetted bog in an undisclosed location. Picture by: Bord na Móna

Though cranes have been extinct in Ireland since the 1700s, there have been increased sightings of them in Irish skies in recent years during migration and over-wintering.

This has been largely due to ongoing conservation works in the UK, that has seen numbers of the birds there rise from zero in the 1970s to over 200 today.

But despite the excitement of seeing the birds in Ireland again, there has been no evidence of successful breeding attempts on this island.

"In very medieval times, cranes were actually people's pet - and they kept them in the households and they were very important birds.

"They're huge birds, they're over four foot tall, they're nearly as tall as a person.

"Cranes are birds that nest in wet areas - in marshes, in boglands - and because there's such a huge amount of drainage, land change and cutting up bogs... the cranes habitats were absolutely taken away.

"And there was nowhere for them to nest."

She said the birds may have taken a long journey to get here.

"The cranes are migratory birds and they fly across great distances.

"They would have been flying from, say, Sweden down to Iberia, down to Spain and flying over Ireland.

"So they must have spied, at some stage from the air, that there was a place that they maybe could breed here.

"I think it's great that the crane is back - it's great to see a bird who was here once coming back because our habitats, landscape or biodiversity is improving a bit.

"Anything that's proof that our environment is improving has to be welcomed, it's a great addition to the Irish fauna.

"And I have to say I'm thrilled about it, I really am".

The crane is deeply connected to the culture and history of Ireland.

They have been central to folklore tales such as Fionn Mac Cumhaill, the druids, St Colmcille and the Book of Kells.

Their Gaelic name, 'corr', can be founded in hundreds of place names - such as the Curragh in Kildare, which means 'crane meadow'.

Main image: A crane is seen on a rewetted bog in an undisclosed location. Picture by: Bord na Móna