A number of families have protested outside a hotel in north Dublin, as they object to being move...

A number of families have protested outside a hotel in north Dublin, as they object to being moved from there.

The Travelodge Hotel in Ballymun has been providing emergency accommodation to homeless people for over three years.

However the Dublin Region Homeless Executive (DRHE) intends to cease use of the hotel as emergency accommodation from June 15th.

Residents there claim this will cause huge upheaval for them and their children.

They also claim some people were told by Dublin City Council they would need to move within a few days - a claim the council denies.

Reporter Josh Crosbie has been speaking with the families there for The Pat Kenny Show.

One woman told him: "I have family support here and my kids go to school in the area, but I also work as a care assistant in the area.

"So all my clients are in this area and they all depend on me - so that means I'll have to change school, give up my job.

"It's just going to knock me back totally."

One nine-year-old boy, living in the accommodation, told him: "My grandad just lives over there, and my uncle and auntie live in the Metro Hotel.

He said he shares his room with his brother and his mother.

"I want to stay... I would rather stay here than go anywhere else", he added. 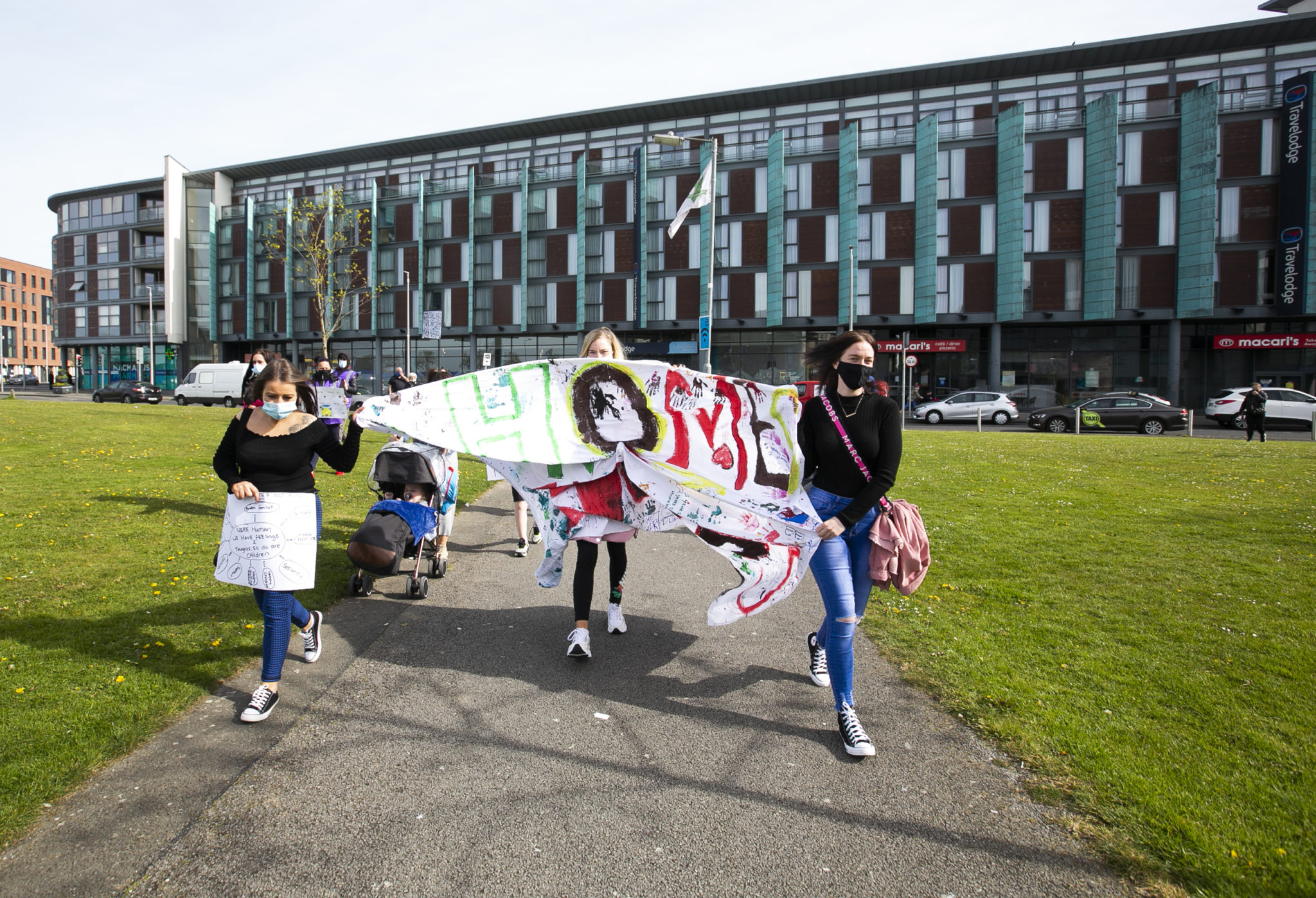 Supporters and residents protest outside the Travelodge Hotel and Ballymun Council offices in Dublin. Picture by: Sam Boal / RollingNews.ie

Another mother living there said: "We've built friendship out of it, we've built a family out of it.

"The love it, it's a home to them, it's the people around them - they're never going to get that again.

"Their schools are across the road, everything is here for them. It was too quick, it was put on us very fast I think".

Another mother claimed: "We were given Coolock or Clontarf, that's the only choices we were given.

"Basically it was like 'You take here or there, or you're out'.

"Where do we turn to on this? It's after falling on our doorstep and it's like no one is listening to us".

'We shouldn't have children in hotels'

Local Fianna Fáil TD Paul McAuliffe said there needs to be more consultation with the families.

But he welcomed the fact that the hotel would no longer be used.

"It was needed at one time, it was a very valuable resource - the Travelodge - but it's day has well ended.

"We shouldn't have children in hotels, and overall I'm glad that the Travelodge is no longer being used.

"But we have to make sure that the small number of families that are left there are accommodated."

A protest is taking place in Ballymun this morning by people living in emergency accommodation and @CatuIreland over relocation plans.

Hear from the families and TD @PaulMcauliffe about the situation in the next few minutes on the @PatKennyNT. pic.twitter.com/rx8q1U9DQM

Deputy McAuliffe said the families will have a number of options.

"Essentially there'll be two options given to people: a permanent council home if they're reached on the list and if they're eligible from the waiting list.

"Don't forget: for every family in the Travelodge, there's many other families that are out in box rooms of parent's houses with kids that are waiting on the list as well.

"So we have to be fair to both groups of people. 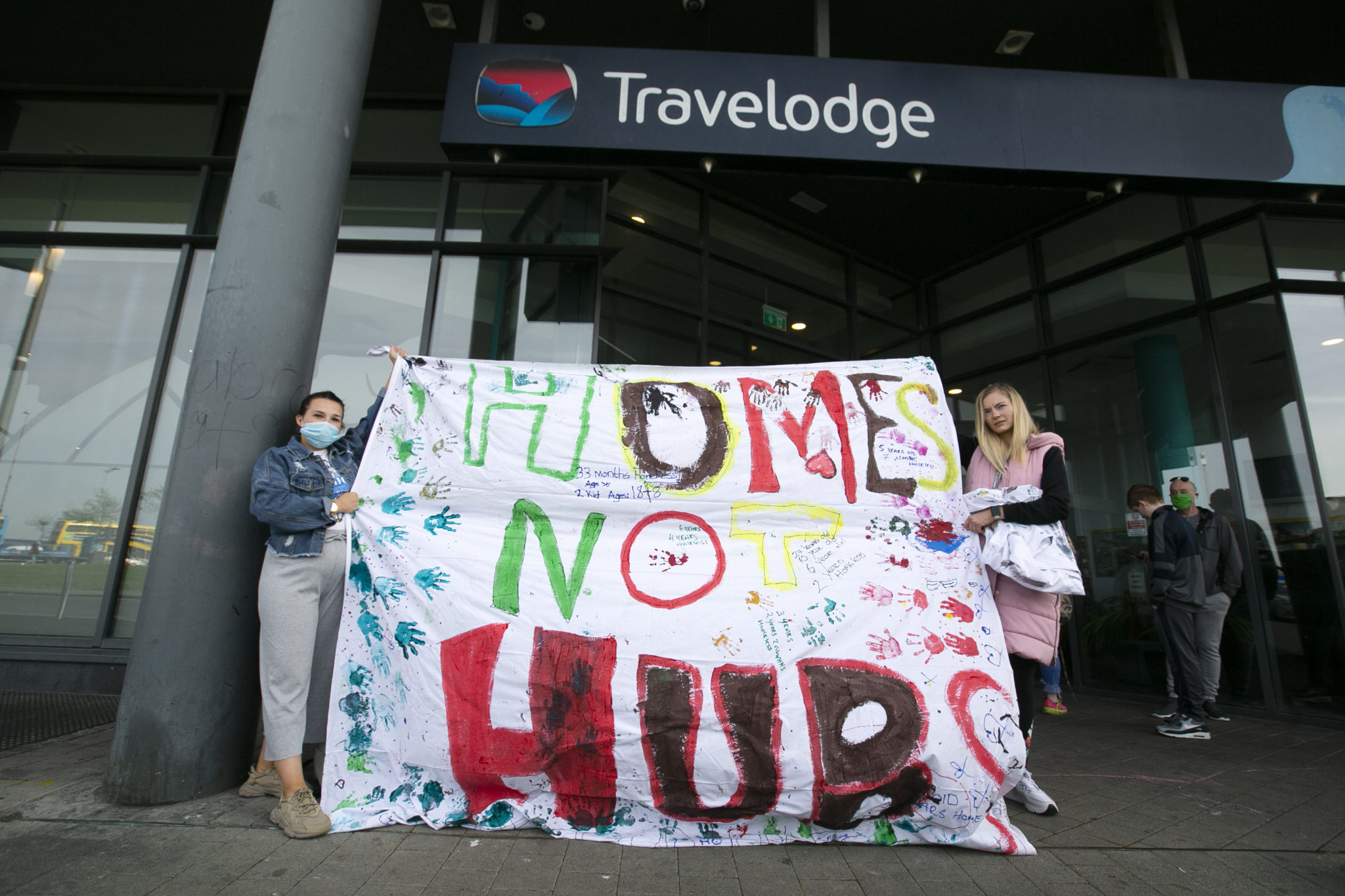 Supporters and residents protest outside the Travelodge Hotel and Ballymun Council offices in Dublin. Picture by: Sam Boal / RollingNews.ie

He said if the June deadline is reached, and people have refused offers, options may be limited.

"If it comes to June and there's still people there, and we have given offers, than there's only so much that can be done as well.

"There are much better places than a hotel to raise your children, and I'd be encouraging anybody that has a good offer to take it".

In a statement, Dublin City Council said: "We can categorically state that no household is under pressure to move immediately- nobody is being evicted and nobody was told that they had to vacate within a very short of time - and they can contact us directly to discuss what they need.

"The statement that families are being requested to leave to make way for workers from a named company is totally inaccurate.

"Given the reduced numbers of families experiencing homelessness, we can now offer choice, as we have vacancies in a number of supported family hubs across the northside.

"There is no pressure on anyone to vacate the Travelodge immediately, and they can remain in the property up until the 15th June if they so wish," the statement added.

Main image: A protest outside the Travelodge Hotel in Ballymun, Dublin (left to right) soup run volunteer Elaine Pepper with Jessica McDonagh, whose sister is a resident at hotel. Picture by: Sam Boal / RollingNews.ie