Civilians are suffering most during the recent outbreak of violence in Israel and Palestine, a reporter in the region says.

Recent days have seen the worst violence in the area since 2014.

On Tuesday, a tower block in Gaza collapsed following an Israeli airstrike, with hundreds of other strikes reported in the last 48 hours.

Overnight dozens of rockets were fired by Hamas at one of Israel's biggest cities, Tel Aviv.

At least 35 Palestinians - including 12 children and teenagers - are now reported to have been killed in Israel's latest bombardment of Gaza.

Tor Wennesland - the UN's Special Coordinator for the Middle East Peace Process - has urged all sides to "stop the fire immediately", warning that "we’re escalating towards a full scale war".

Stop the fire immediately. We’re escalating towards a full scale war. Leaders on all sides have to take the responsibility of deescalation. The cost of war in Gaza is devastating & is being paid by ordinary people. UN is working w/ all sides to restore calm. Stop the violence now

The UN Security Council - which currently includes Ireland - is due to meet today to discuss the escalating tensions.

Foreign Affairs Minister Simon Coveney said yesterday: "Killing of children in conflict is never acceptable. Israel should be condemned for targeting Gaza with such tragic consequences.

"Firing rockets from Gaza must be condemned, but so too should such a brutal response. This violence must end."

Bel Trew, Middle East correspondent for The Independent, spoke to Breakfast Briefing about the ongoing violence.

Im at the site of where one woman was killed in the barrage of rockets over the Tel Aviv. Officials say it was a direct hit. Extremely tense, I was just attacked by a crowd who said I was an Arab. Had to be escorted away by security forces. pic.twitter.com/89aLiTPooc

She said: “The Israeli military said in total around 1,000 rockets have been fired towards Israel from Gaza since this started.

“They said five Israeli civilians had been killed, and more than 200 wounded.

"There is still a cross-border flare-up of fire happening between the two sides - it doesn’t look like this is going to calm down anytime soon.”

She said there currently appears to be little opportunity for a “speedy ceasefire” given the intensity of the current situation.

She explained: “It has been a long time coming in terms of how we’ve reached this massive level of escalation.

“It started in Jerusalem, which is the contested city that both Israelis and Palestinians see as the capital of their state or future state.” 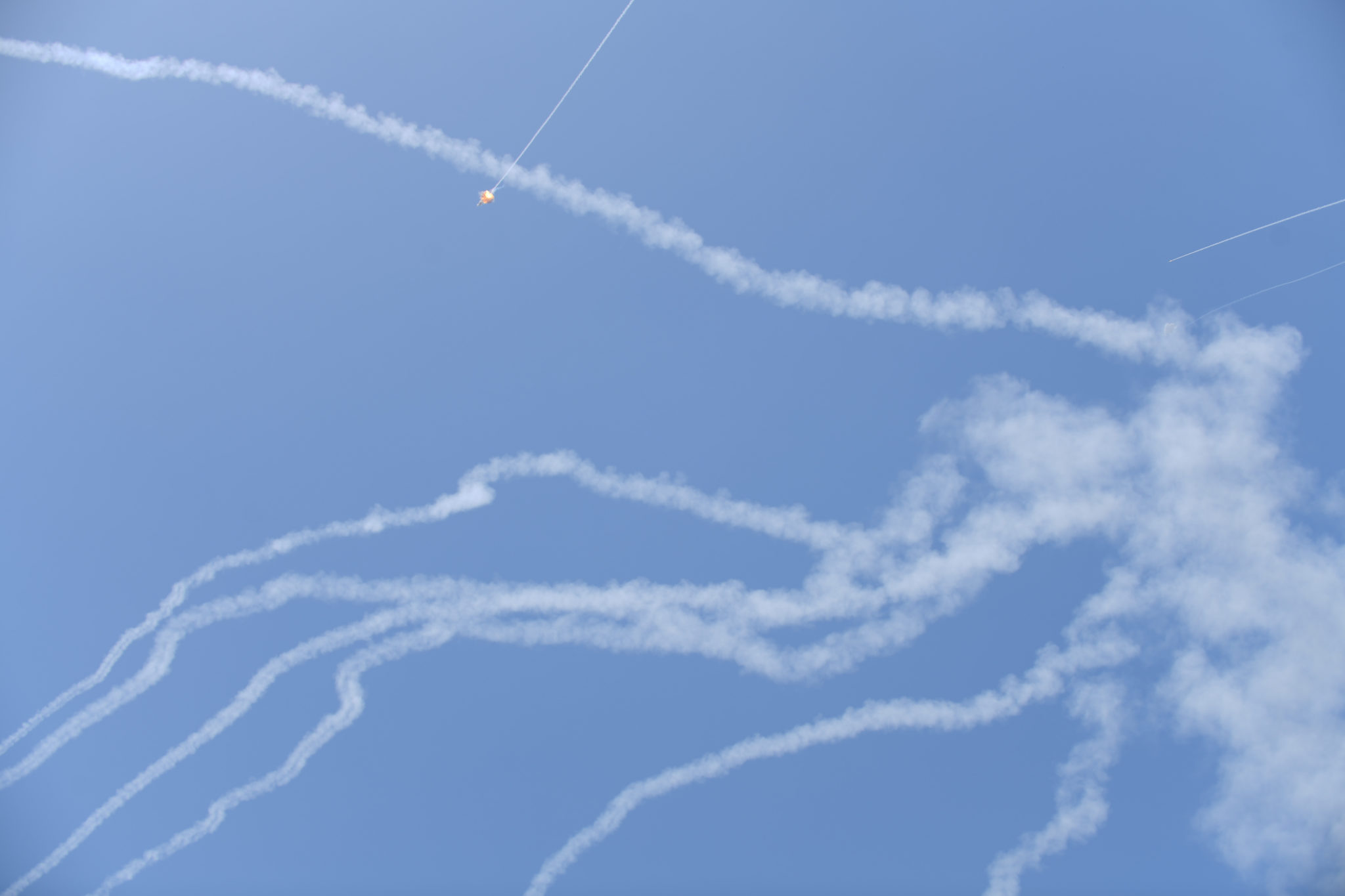 (210511) -- ASHKELON (ISRAEL), May 11, 2021 (Xinhua) -- Iron dome anti-missile system fires interception missiles as rockets were fired from the Gaza Strip to Israel, in southern Israeli city of Ashkelon, on May 11, 2021. Two Israeli women were killed by rocket barrages from Gaza in Ashkelon Tuesday afternoon, Israeli authorities said, amid one of the worst flare-ups in the past years. (Tomer Neuberg/JINI via Xinhua)

Tensions had been increasing during the month of Ramadan, but escalated dramatically after Israeli security forces stormed Al-Aqsa mosque - one of the holiest sites in Islam.

Israeli forces used tear gas and stun grenades against Palestinians in the compound, with Palestinians throwing rocks and chairs.

That prompted Hamas to fire six rockets towards Israel on Monday - leading to a rapid escalation on both sides of the border.

Bel explained: “I was down in southern Israel yesterday, and I’d say every five minutes you have to dive for shelter as the rocket sirens go off.

“It’s certainly frightening and very troubling for Israeli civilians. But at least there is access to shelters here in Israel - in Gaza of course families don’t have bomb shelters.

“There are some warnings that are given by the Israeli military, depending on the type of target. But a lot of the time they don’t have an incoming fire siren like the Israelis do.

She said it’s civilians in Israel and Gaza who are “paying the price” of the recent escalation of violence.

Ireland now 'bottom of the pile' in Europe for air traffic