The weather is set to get much colder from next week, as a phenomenon known as the Greenland Block is due to arrive in Europe.

This is an area of high pressure that sets up over Greenland and 'blocks out' the Atlantic.

Alan O'Reilly from Carlow Weather told Moncrieff what this could mean.

"Most of our weather usually, or certainly for the last couple of months, seems to be coming from the Atlantic - with the jetstream sending winds and lots of rain our way over autumn," he said. 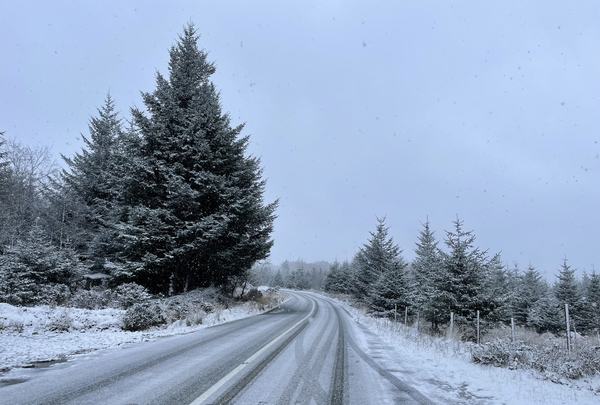 Snow on the road to the Wicklow Gap in January 2022. Picture by: Eamonn Farrell/RollingNews.ie

"The block in the east will now move towards Greenland and it'll send the jetstream moving away from us.

"It'll stop that wave of wind and rain coming from the Atlantic; and instead the winds are going to go easterly.

"That basically allows our weather to come from the east and from the north, and at this time of the year that brings cold air.

"So it's going to turn much, much cooler from the weekend and into next week."

'Opposite to what we normally have'

"We're not talking about 'Beast from the East'... it's not quite cold enough in the east, for now at least," he said.

"The weather models are fairly sure that the Greenland Block is going to set up, but then there's a few little subtle variants to that that can make a big difference.

"Low pressure will go to the south, high pressure to the north - which is the opposite to what we normally have.

"However where exactly those low pressures end up depends on where the air that we then get coming towards us."

He said this could see the 'S' word moving in on Irish shores.

"If we get a north-easterly [wind] then what happens is the Irish Sea becomes a snow-making machine," he said.

"You have cold air moving over warm water; it bubbles up these beautiful nice, big clouds that come in on land and can fall as snow if it's cold enough," he added.

Weather to turn 'much milder' after more freezing conditions