Irish prisoners were paid more than €2.5 million in pocket money in the first ten months of las...

Irish prisoners were paid more than €2.5 million in pocket money in the first ten months of last year.

According to details released to Newstalk under the Freedom of Information Act, inmates received a further €4.3 million from their family and friends in all of 2019.

There are more than 4,000 prisoners in 13 jails across the state.

Every inmate receives a daily allowance from the Irish Prison Service, which they can spend to buy items in the tuck shop.

The standard daily rate is €1.70 - but this rises to €2.20 for well-behaved prisoners and is cut to 95 cents for bad behaviour.

Inmates can also get additional payments of up to €3.50 per week for working in areas such as prison kitchens or laundries.

In the first ten months of last year, more than €2.5 million was paid under these schemes. 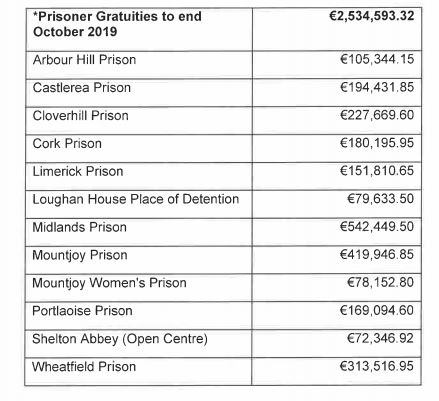 John Lonergan, a former governor of Mountjoy Prison, says the daily allowances are far too low.

He observed: "The basic one is less than €7 a week per prisoner, and the second grade is around €11 per week.

"When you take it that a packet of cigarettes alone would cost over €11, I think it puts into perspective.

"The global figure is misleading in the sense that it's a gross figure - the public might see it as a huge amount of money, but in actual fact it's a very, very tiny amount of money."

In all of last year, prisoners received a further €4.35 million in gifts from family and friends.

Banksy bids to buy prison where Oscar Wilde was jailed

Most law-breaking counties in Ireland revealed