The head of zoology at NUI Galway has co-authored a new study which examined the differences in o...

The head of zoology at NUI Galway has co-authored a new study which examined the differences in octopuses skin.

Professor Louise Allcockt found octopuses from deeper in the ocean had warty skin, compared to their shallower smooth-skinned counterparts.

DNA sequences revealed they were the same species, despite looking so different.

The study was led by The Field Museum of Natural History in Chicago, and has been published in the international journal Bulletin of Marine Science.

Deep beneath the ocean’s surface, surprisingly cute warty pink octopuses creep along the seafloor. But not all these octopuses look alike.

Some have massive warts, while others appear nearly smooth-skinned.

Scientists were not sure if these octopuses were even members of the same species, and they did not know how to explain the differences in the animals’ looks.

But in this new study, scientists cracked the case: the deeper in the ocean the octopuses live, the bumpier their skin and the smaller their bodies.

DNA revealed that even though the octopuses looked different, they were the same species.

Professor Allcock, who analysed the DNA data, said: "We really weren't sure what the DNA would tell us.

"Warty octopuses occur throughout the deep oceans of most of the world, including all the way down to the Antarctic, and there are real issues in determining the true number of species.

"From many locations we only have one or two specimens, because they live in really inaccessible habitats, so we had very little experience as to how much individuals of any given species might vary."

Lead author Janet Voight, associate curator of zoology at the Field Museum, added: "If I had only two of these animals that looked very different, I would say, 'Well, they’re different species, for sure.'

"But variation inside animal species can sometimes fool you.

"That’s why we need to look at multiple specimens of species to see, does that first reaction based on two specimens make sense?". 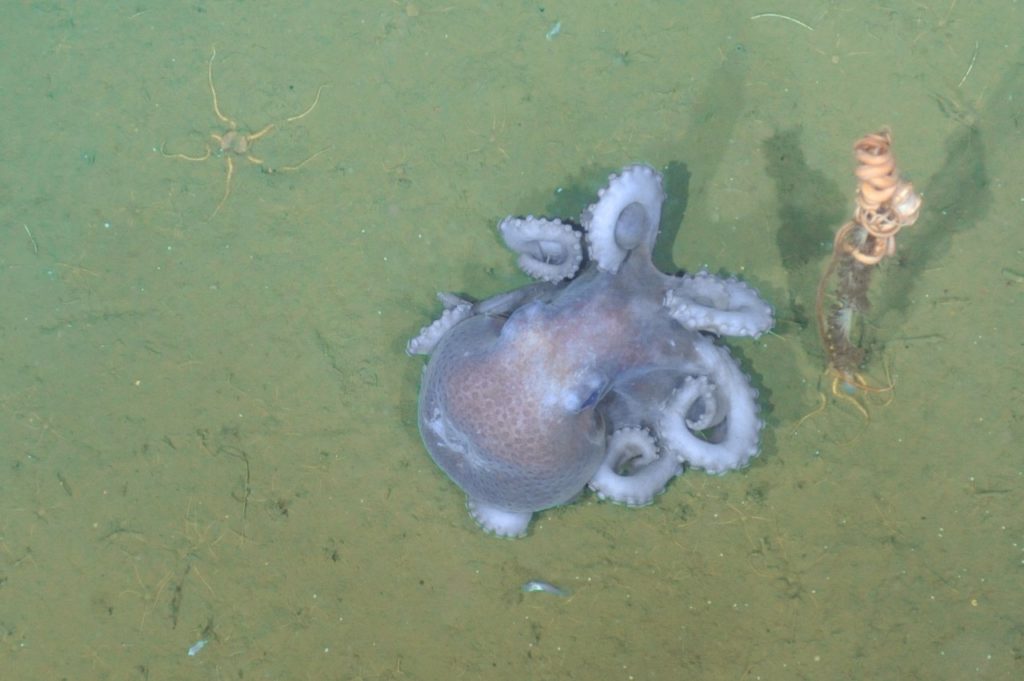 To figure out if the smooth and warty octopuses were the same species, the scientists examined 50 specimens that were classified as Graneledone pacifica, the Pacific warty octopus.

Plunging deep into the ocean, a human-occupied submersible vehicle collected some of the octopuses from the northeast Pacific Ocean.

The team also studied specimens loaned from the University of Miami Marine Laboratory and the California Academy of Sciences.

They looked at specimens from up and down the Pacific, from as far north as Washington State to as far south as Monterey, California - and from depths ranging from 3,660 feet to more than 9,000 feet below the ocean’s surface.

They found that the octopuses from deeper in the ocean looked different from their shallower counterparts.

The deep-sea specimens were smaller, with fewer arm suckers, and - most noticeably - bumpier skin than those from shallower depths.

They found the animals’ appearances changed according to how deep they live.

Ms Voight thinks that these octopuses usually eat creatures from the sediment on the ocean floor, passing food from sucker to sucker and then crushing their prey like popcorn.

"There’s less food as you get deeper in the ocean. So these animals have to work harder to find food to eat.

"And that means at the end of their lives, they’ll be smaller than animals who have more food.

"If you’re a female who’s going to lay eggs at the end of your life, maybe your eggs will be smaller".