Amber Barrett has given an emotional interview on The Pat Kenny Show.

Ireland goalscorer Amber Barrett has paid an emotional tribute to victims of the Creeslough tragedy on The Pat Kenny Show.

Barrett scored the winner in Ireland’s play-off against Scotland last night to take the country to our first-ever Women’s World Cup.

After racing clear to score, the Donegal native sank to her knee and kissed her black armband in memory of those who were killed or injured in the Creeslough explosion.

After the match she revealed that both of her Grandparents are from the tiny Donegal village, and she spent her childhood, including Christmas and summer holidays there.

She dedicated the win to the “ten beautiful souls who perished”, adding: “This is for Creeslough, this is for Donegal."

On The Pat Kenny Show this morning, Barrett broke down in tears, explaining that while the team has “done our best to lift spirits”, it is “very, very difficult” to put things into perspective after the tragedy.

Ireland manager Vera Pauw then took over the interview noting that Barrett’s celebration “came form so deep down inside” and adding that the team has a special bond and is “always there for others.” 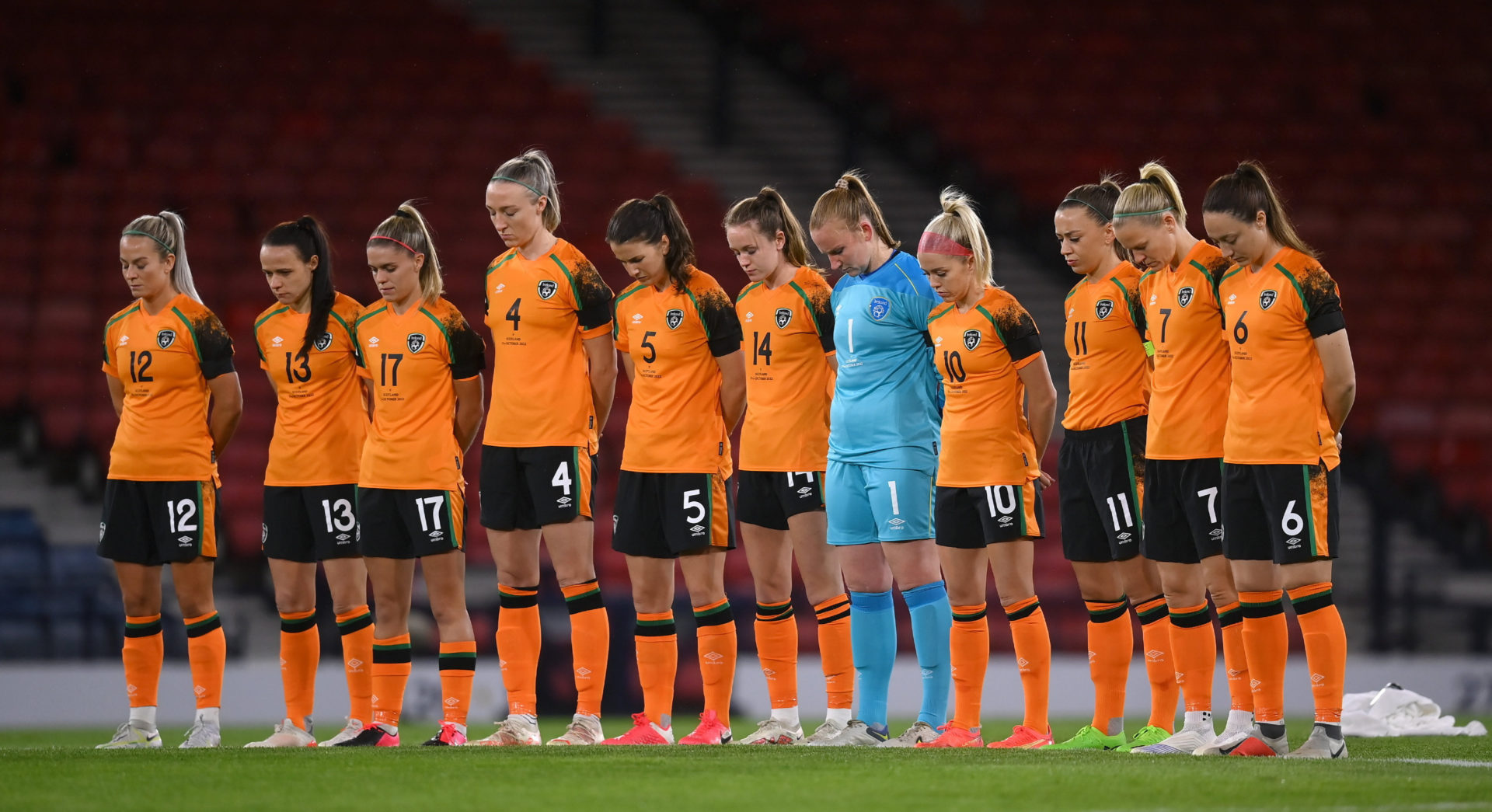 Republic of Ireland players stand for a minute’s silence to remember the lives lost and those injured in the Creeslough tragedy, 11-10-2022. Image: Stephen McCarthy/Sportsfile

Earlier in the interview, Barrett said the days leading up to the match were “harrowing” for the team.

“You just can’t look forward to a World Cup qualifier with that in the back of your head,” she said.

“You can’t ignore what has happened. I think personally, with having so many connections to Creeslough, it is one of those things, you can’t just head off to training and away you go and forget everything.” 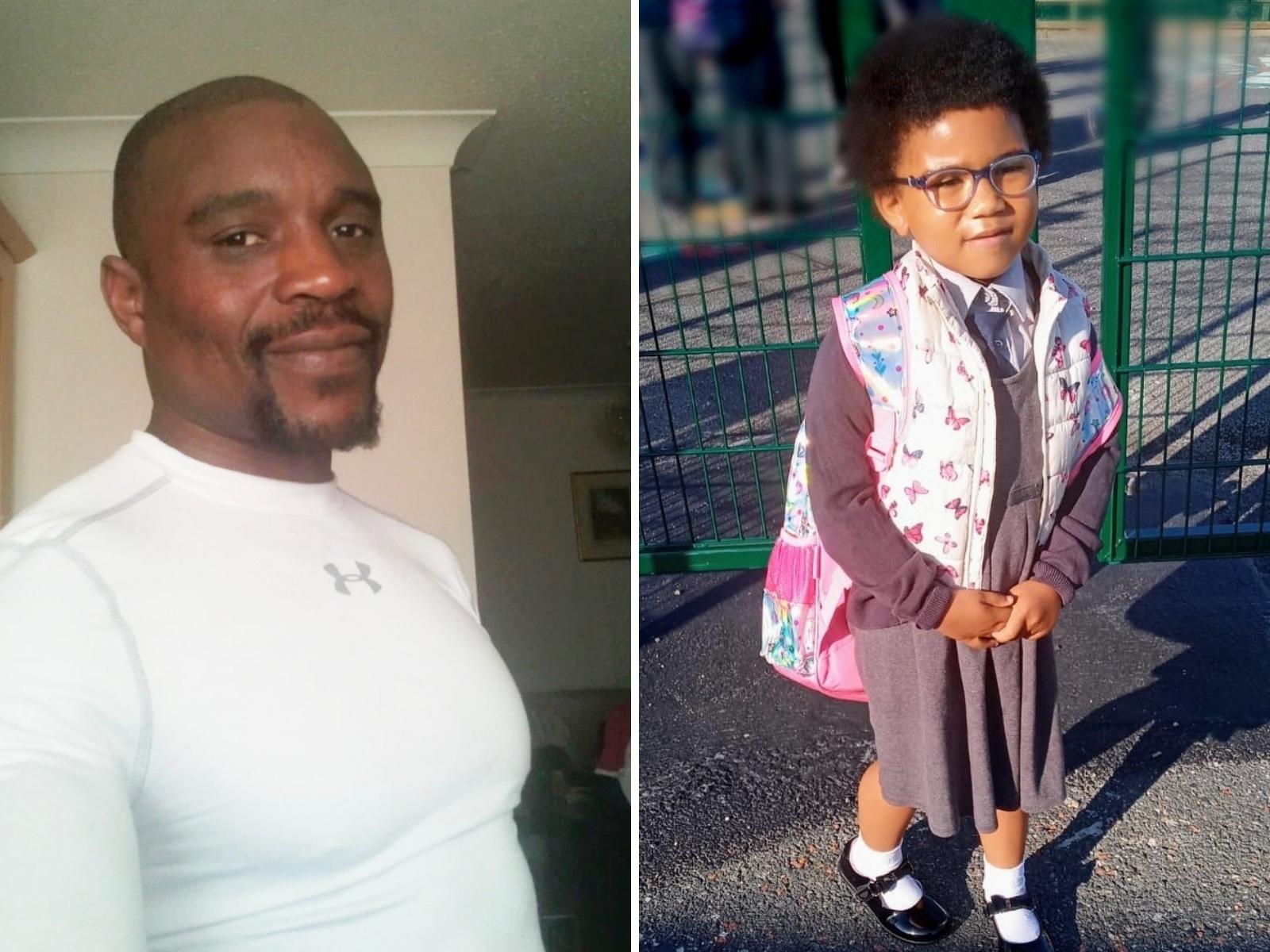 Barrett referenced five-year-old Shauna Flanagan Garwe who was in the shop buying a birthday cake for her mother and 24-year-old Jessica Gallagher who had come back from France to visit her boyfriend, noting: “You just can’t put that into words in terms of perspective.”

“When you break it down, we don’t scratch the surface in terms of importance in life,” she said. 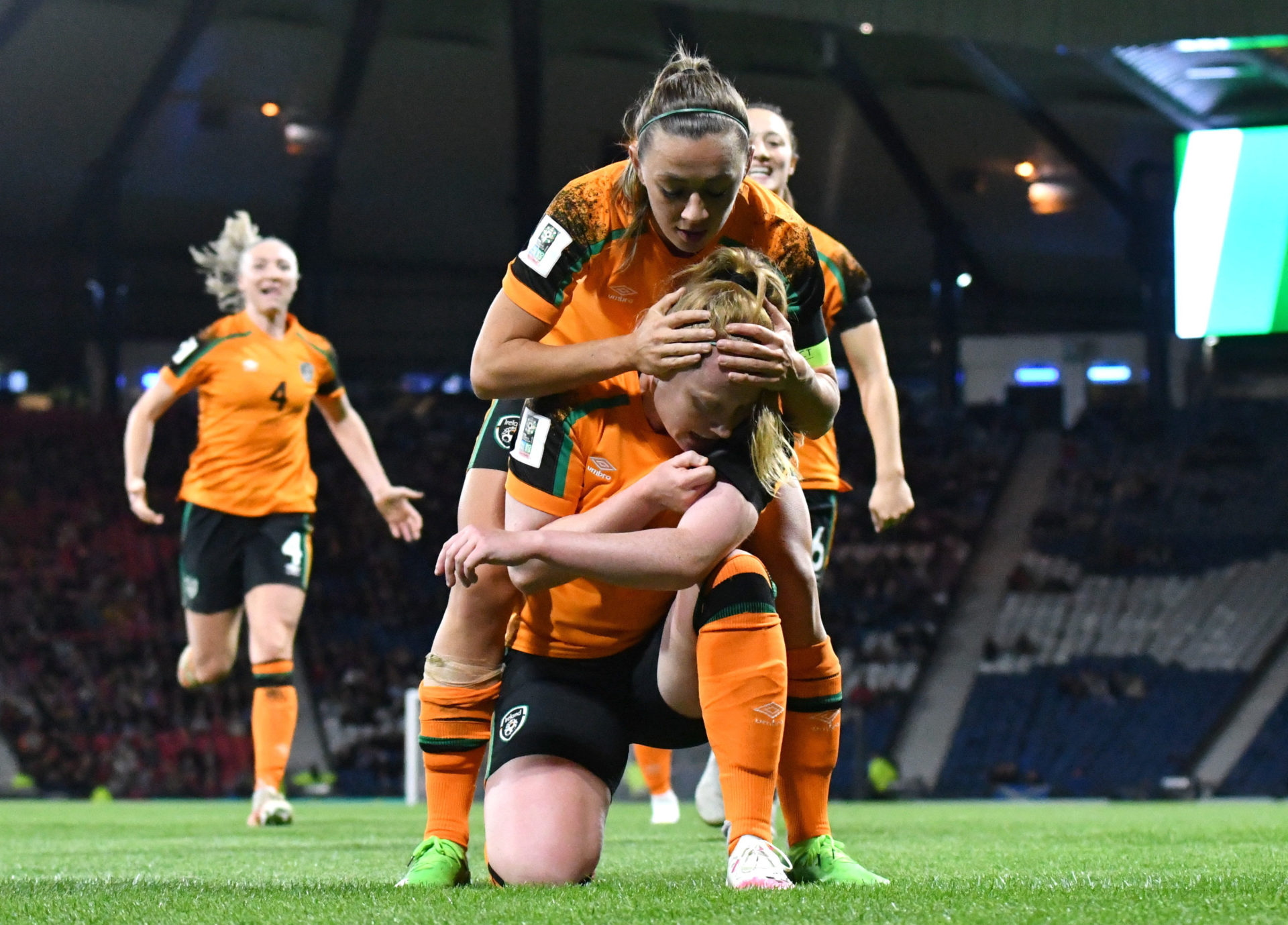 Ireland captain Katie McCabe holds Amber Barrett as she kisses her black armband, worn to remember the lives lost and those injured in the Creeslough tragedy, after scoring her crucial goal,11-10-2022. Image: Mick O'Shea/Sportsfile

The striker said the victims of the tragedy will never be forgotten.

“I just think this whole thing with the Ireland women’s team qualifying for the World Cup, I think it gives some sentimental value to their lives and I am so glad to be part of it but at the end of the day, we will never ever forget what they have done for our lives.

“Maybe not personally but they touched the lives of their family and their friends and I don’t think we can ever forget that.”

Barrett also praised the crowd in Scotland for the minute’s silence that was held before the game.

“We had our moment of silence on Sunday morning at training for Creeslough and I think that has carried through,” she said.

“I have absolutely no doubt that anybody that was affected by this was there with us last night and they carried us through that result.”

Main image shows Ireland striker Amber Barrett celebrating her crucial goal by showing her black armband for those killed and injured in Creeslough with captain Katie McCabe and the rest of her teammates, 11-10-2022. Image: Stephen McCarthy/Sportsfile