A dog breeder, whose puppies were stolen several weeks ago, has said she cannot help but think wh...

A dog breeder, whose puppies were stolen several weeks ago, has said she cannot help but think where they are now.

78-year-old Marie Butler's entire litter of six cardigan corgis were taken from her kennels in Co Kilkenny six weeks ago.

Happily, one of them have since been recovered - and a second is due to come back from England.

She told Pat Kenny she is still in shock and heartbroken over the four who are missing.

"They were stolen from under my nose - because I am 11 metres from my kitchen to the puppy house.

"They had only gone out there about five days previously, for the duration they were in my pantry off the kitchen for the six weeks.

"At that stage the weather was improving, and of course puppies need the fresh air and to stretch their legs while they're developing."

She said it happened at about 10.00pm, while she was preparing their breakfast for the next morning.

"Obviously they were well organised, because they entered down the end of my garden, through two of my neighbours and a few hundred yards down the road from me into a farmers field, that's where they parked their vehicles.

"So they were obviously watching me for a while."

Marie said she has good lighting in the kennels, as well as an alarm system.

"But now everything has changed: I now believe I am only one step down from the FBI-type security.

"Not because I'm afraid, I would not be a faint-hearted person, but for the rest of the dogs here.

"I have to say I will never have puppies here again, even though I show dogs and judge internationally.

"I will just stay with what I have - and if I ever change my mind, they won't be here." 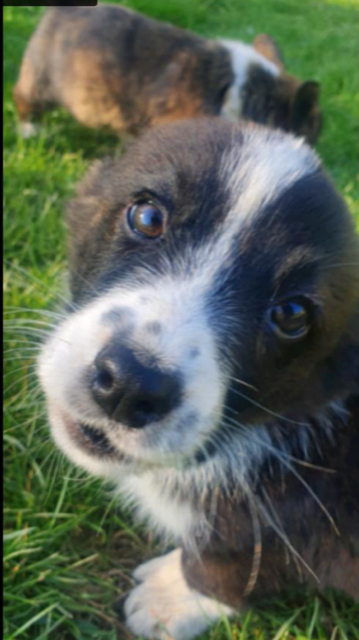 One of the photos on the Gumtree ad in UK, which Marie believes is her puppy. Picture: Supplied

Marie said she even saw her dogs on a UK-based website.

"Some of them came up, and this is very heartbreaking, to see your puppies on a website in England.

"And of course I recognised them - because of course after 51 years of looking at dogs, your eye doesn't lie.

"I would have known the markings, it would have been imprinted in my brain what my pups look like.

"Apparently they were sold - these are the dogs of my heart, and I'm hoping in my heart that the ones that were sold were sold to good homes".

Marie said thinking about what her dogs may be going through is the worst.

"That's the worst of it - if you saw where they came from, and then wondered the horror of 'what hole were they kept in' or 'what bag were they suddenly shoved into?'

"Every time you think if it even still, you feel the lump in your throat and the butterflies in your tummy.

And Marie said she would have had no second thoughts about taking on those responsible.

"I still feel a certain regret, that while they did it under my nose they didn't do it in front of my eyes.

"I would be a little stupid also, I would tackle them, and that's not possible when you're a very tiny person.

"So the Guards told me there would have been an ambulance there, had I been in the midst of it".

One of the dogs, Sophie, found her way back to Marie through the Laois SPCA.

While another dog is due to be returned from England, after she was bought by a friend of Marie's in the UK.

Marie said that dog is now in "protective custody" before coming home.

"She went to England illegally, but she is coming back very legally".

Main image: Sophie, who is to be reunited with Marie. Picture: Supplied