The HSE is looking at "all options and scenarios" when it comes to administering COVID-19 vaccine...

The HSE is looking at "all options and scenarios" when it comes to administering COVID-19 vaccines to 12 to 15-year-olds, Paul Reid has said.

However, the CEO of the health service added that there is currently no plan to prioritise the vaccination of teenagers ahead of the return of schools in September.

NIAC is set to issue updated advice on its use on children aged between 12 and 15 shortly after EU regulators approved the use of the Pfizer vaccine for this age cohort in May.

While it had been reported today that the vaccination of children in that group could start as early as next month, Mr Reid stated that extending the rollout to this age group was "not currently built into baseline assumptions".

Speaking to On The Record with Gavan Reilly, he said the HSE will follow the NIAC recommendations when it comes to inoculating this cohort.

"NIAC are assessing the evidence and information relating to the vaccination of 12 to 15-year-olds, they're considering that over the next short period, they haven't made any recommendations as yet," he said.

"We take our lead from recommendations that would come from NIAC.

"What we are doing in parallel is looking at various scenarios that may emerge for vaccinations of younger children, 12 to 15.

"We would look at it in the context of the various channels for vaccinations that we have now, GPs, pharmacies and vaccination centres so we're looking at all options and all scenarios but ultimately, it's still under assessment by NIAC."

Mr Reid explained that the guidance will determine what happens between now and the start of schools in September.

"Everything that we have done has always been modified or planned based on emerging evidence so will wait and assess any recommendations coming from NIAC.

"But right now we're motoring on with the programme as we have currently set it out.

When it comes to the rollout of the vaccine programme for adults, Mr Reid urged people in the older age cohorts to get their second dose of AstraZeneca when they are offered it.

"We know that you are not at your highest levels of protection until you get your second dose," he said.

Some 450,000 people are due to receive a second dose of AstraZeneca of which almost 250,000 have been completed in the last two weeks.

"They will all be fully completed in the week beginning July 12th, so over the next ten days we will have completed all of those," he added.

The HSE boss was also surprised to hear that some people in the 35 to 39 age group were facing problems when trying to arrange their second coronavirus vaccine.

Several individuals, including TD Duncan Smyth who raised the issue in the Dáil this week, have reported that their appointments were cancelled when an error arose after they completed a pre-vaccination questionnaire.

The health service issued an appeal to people yesterday to give their consent before attending a vaccination appointment.

It will send an SMS message to those who are awaiting an appointment at a vaccination centre containing a link that allows people to give consent to their allocated vaccine online.

However, despite giving their consent, some people have had their appointments erroneously cancelled. 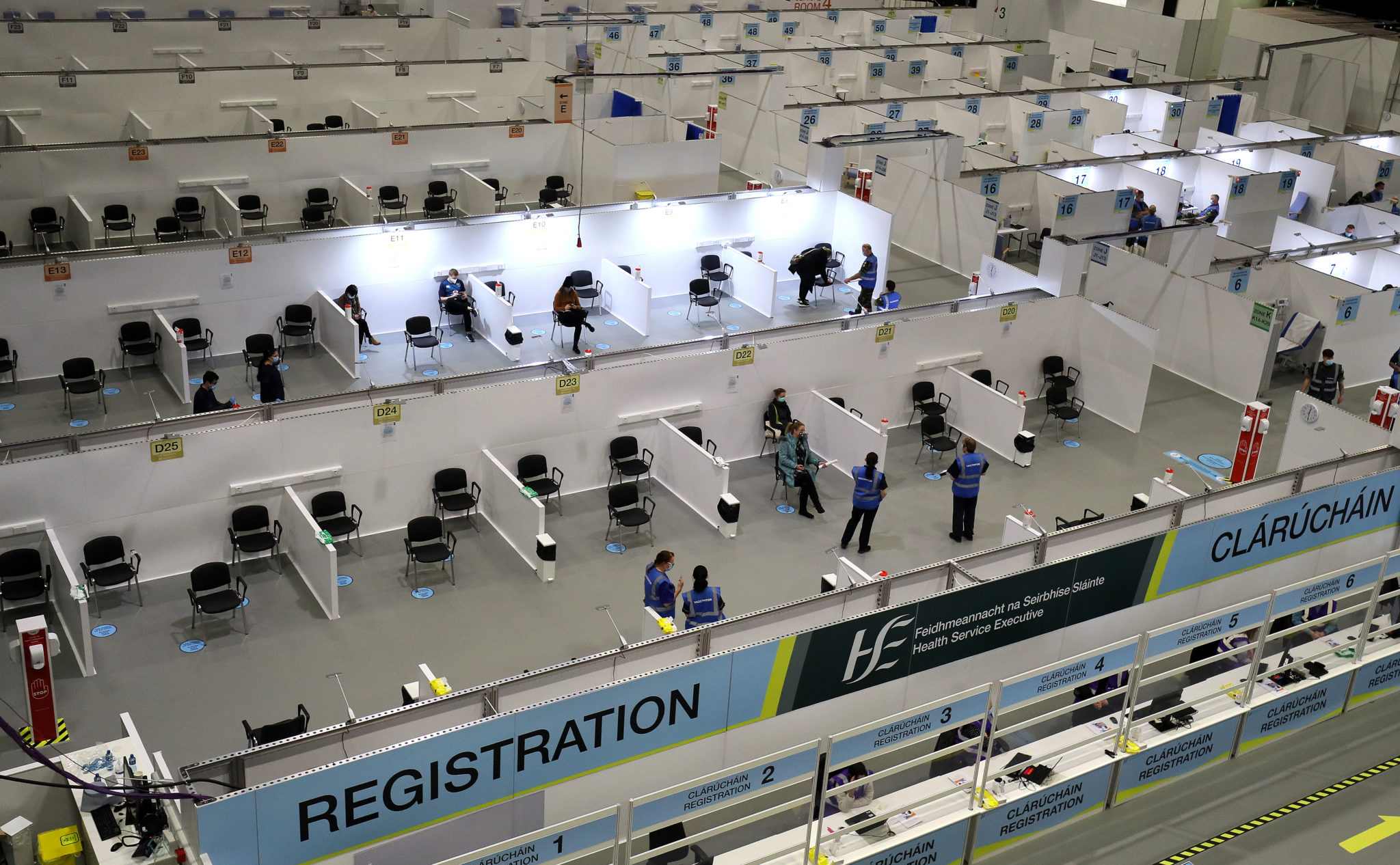 A view of the Citywest COVID-19 vaccination centre in Dublin. Photo: PA

"I'm not fully familiar with that issue, to be frank," Mr Reid said.

"With the 35 to 39s, we've already started significantly vaccinating those people coming through so I'm not fully familiar with that issue.

"Ultimately, [we're working on] the processes to try and make it even more streamlined in the vaccination centre as people come forward."

Mr Reid also expressed his concern that the nation's hospital systems would be under pressure if a fourth wave of COVID-19 caused by the Delta variant resulted in people being hospitalised.

"The reality of it is our hospitals are extremely busy right now and understandably, we are very conscious to get back to non-COVID care," he stated.

"Obviously as the economy has opened up and sporting activities have opened up, we have a lot more attendances and admissions for our emergency departments.

It comes as 448 new cases of the virus were reported yesterday, with 42 people being treated for the virus in hospitals, including 14 in ICU.

"Today, while you say 14 people are in ICU, there are actually 260 people in ICU for various reasons, some from elective care," he added.

"Our hospitals are extremely busy, our emergency department attendances have been over the last few weeks above the Christmas period in 2019 when you go back pre-COVID.

"We are extremely busy so the Delta variant would be extremely concerning for us if it was to turn into hospitalisations at a significant level."