A data centre in south Dublin will soon be heating a college campus and local authority offices.

This is done through district heating: using a central heat source and distributing this heat through super-insulated pipes to the customer.

Donna Gartland is CEO of Codema, the energy agency behind the Tallaght District Heating Scheme.

She told Moncrieff Ireland needs to be doing this more.

"This really is a new enough concept for Ireland, but used very widely across Europe.

"We're actually one of the only countries in Europe who has very low shares of district heating.

"We're less than 1% of our heat demand - whereas the average across Europe is at 12%.

"And in countries in Scandinavia, they'd have 60/70% of their buildings connected to these schemes."

She explained how the system works.

"It takes it from multiple different sources - so industries, data centres, everything that produces waste heat.

"So power stations, for example, would have a lot of waste heat - so about 50% of all of the losses in a power station is in the form of heat.

"And they usually have to dump that into rivers, like the Liffey, or into the sky through the chimneys that you'd see around the place.

"You can recycle all of that waste heat into these schemes". 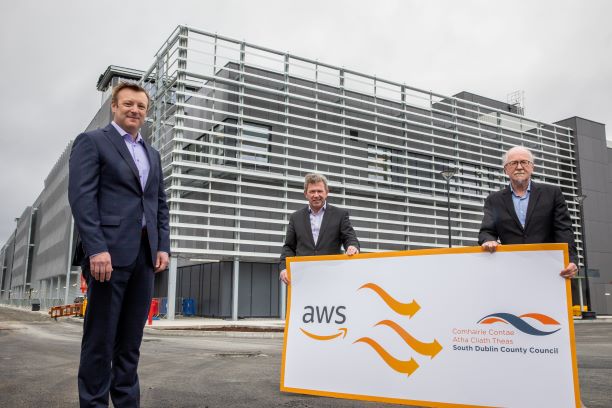 Announcement of the Tallaght District Heating Scheme. Picture by: Codema

She said such heat sources can come from anywhere.

"I lived in Denmark, for example, and a scheme where they recycled the waste heat from the local crematorium into the network.

"Probably not the nicest of thoughts, but that's the kind of thing - and that obviously off-sets the use of fossil fuels".

Under the Tallaght District Heating Scheme, an Amazon data centre pushes out heat using fans, which is then made hotter using heat pumps, before being sent to buildings in the area.

This includes the TU Dublin campus and the South Dublin County Council offices.

New apartments and an innovation centre are also due to be connected.