Heavy school bags are "a major contributing factor" to back and neck pain for young people, accor...

Heavy school bags are "a major contributing factor" to back and neck pain for young people, according to one physiotherapist.

Ann-Marie Ennis, a chartered physiotherapist based in Swords, said that the problem is worse now than at any time throughout her 25-year career.

She added that sedentary lifestyles and "seriously heavy school bags" were contributing to the back issues in schoolgoers.

Speaking on Lunchtime Live, she said she sees students coming in with mostly upper back and neck pain.

Ms Ennis said: "[Heavy school bags] combined with the lack of physical activity we're seeing in modern teenagers can result in quite bad general pain in the whole back area and muscle weakness.

"We do want our kids walking to school, because school bags are so heavy parents are driving their children, and that's not what we want.

Ms Ennis said that with new technologies, "there's no need for this level of hauling heavy books in and out of schools every day".

She added: "I have been a physiotherapist for over 25 years and in my earlier days practising, I wouldn't have seen so much of it,"

It comes as one local Councillor in Co Clare has contacted the Department of Education about the issue.

Councillor Ann Norton said that the Minister for Education needs to examine the issue of heavy bags and "do an overhaul".

She said: "I think the fact that we're in a pandemic makes it works now because lockers are not accessible due to COVID.

"This is something that has been going on for a long, long time not just now and you see som many young people walking or cycling to school.

"They're growing at this particular time, particularly secondary school students.

"It's something that needs to be highlighted until somebody actually takes heed.

"I think down the line w have to look at the health and wellbeing of the younger generation."

Cllr Norton said she has a 16-year-old boy who is already going to physio, and she attributes some of his neck pain to carrying a heavy schoolbag. 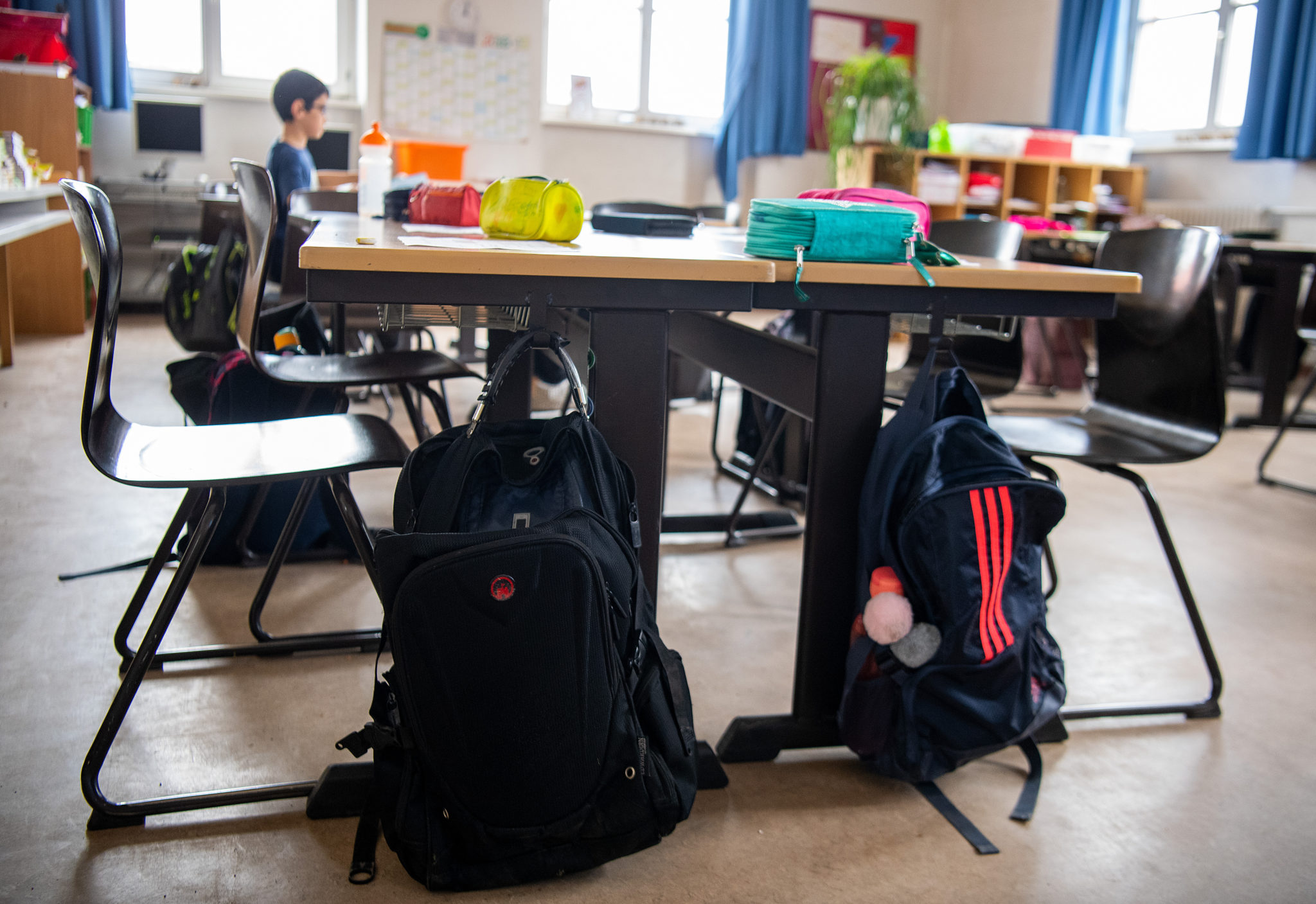 School satchels hang on the school desks in a classroom of a primary school. Photo: Monika Skolimowska/dpa-Zentralbild/dpa

Meanwhile, one listener who called into the show said she had two young boys in school whose bags weigh a combined 9kg every day.

Cllr Norton said the issue is exacerbated by COVID-19 as no student is allowed used lockers since they returned to school in September.

She said: "They're requested to bring certain books to school every day and now with COVID they have no option because they don't have lockers."

She said alternatives such a trolley school bags are not an option for secondary school students in particular who don't want to be seen with such items.

She added that tablets or iPads are not a full solution to books either, as students like to be able to write in and use books.

Cllr Norton has recently put forward a motion for students to come in front of the Council to speak of their experiences.

She said: "The idea that I had was a lot of schools offer Transition Year and I think if we actually get the feedback from students themselves and it's their information that we're passing on to the Department of Education, they have to take it seriously.

Cllr Norton added that she has had no response back from the Department yet but said she would be contacting local schools and conducting a survey to hear students' views on how to address the problem.

Tips for avoiding back and neck pain when working from home

Ireland needs to have 'the adult conversation' about medical cannabis