The Irish grocery market hit a new milestone over the Christmas period, as December sales eclipse...

The Irish grocery market hit a new milestone over the Christmas period, as December sales eclipsed €1bn for the first time on record.

The latest figures from Kantar show that although growth slowed in the 12 weeks to December 29th, the market saw an overall 1.5% increase in sales on last year.

All of the major retailers saw growth over the festive season, albeit not necessarily as a result of typical Christmas favourites.

Dunnes Stores retained its position as Ireland's largest retailer, and was the only grocer which did not experience a slowdown in growth compared to last month.

Christmas is typically Dunnes' strongest season, as shoppers trade up to more premium products - and Kantar says this year was no different.

It achieved a market share of 23.6% in the latest 12 weeks, 1.2 percentage points higher than its average over the rest of the year.

Meanwhile SuperValu, which typically performs best over the summer, had a Christmas boost and increased sales by 1.4%.

Aldi was the strongest performing retailer over Christmas, with sales up 6.3%, while Lidl's market share of 10.9% is its highest ever over the festive period.

Aldi says it saw its best ever Christmas trading in Ireland. 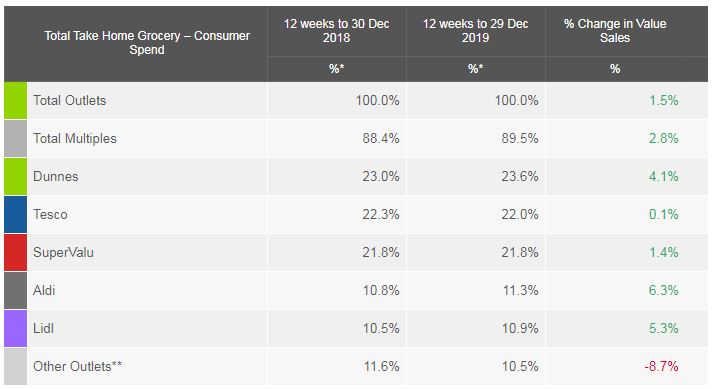 Giles Hurley, CEO of Aldi Ireland and UK, said: "More customers than ever before shopped with us this Christmas".

"Although we saw strong growth across all key categories, sales of our premium Specially Selected range surpassed expectations".

Charlotte Scott, consumer insight director at Kantar, said: "The nation enjoyed a less traditional Christmas this year with many of the usual seasonal classics falling out of favour.

"The number of people buying turkey fell by 3% and the trimmings didn't fare much better as sales of Brussels sprouts, carrots, parsnips and potatoes all declined.

"It was a similar story in the dessert aisles as the value of mince pies dropped by 13% and Christmas puddings by 10%.

"Ham resisted the trend, growing at 5% as shoppers paired it with their Christmas dinner."

Only SuperValu and Dunnes bucked the trend - increasing alcohol sales by 3.9% and 0.7% respectively.

Both Aldi and Lidl bucked the trend of falling prices across the sector, and saw prices per pack increase during the period.

Kantar says this was down to a push on brands and premium products, evidenced by the popularity of their premium own-label ranges.

Tesco's growth was the slowest in the market at 0.1%, which saw it lose 0.3 percentage points of market share and fell to 22.0%.