A park ranger in the Democratic Republic of Congo has posted a remarkable selfie on social media.

It shows Mathieu Shamavu posing along with a pair of gorillas, standing proudly in the background.

The picture was taken at Virunga National Park - a UNESCO World Heritage Site.

It is Africa's oldest national park and is also the continent's most biologically diverse protected area.

The park is made up of several habitats - ranging from swamps and steppes to snowfields and volcano slopes.

Mountain gorillas are found in the park, some 20,000 hippopotamuses live in the rivers and birds from Siberia spend the winter there. 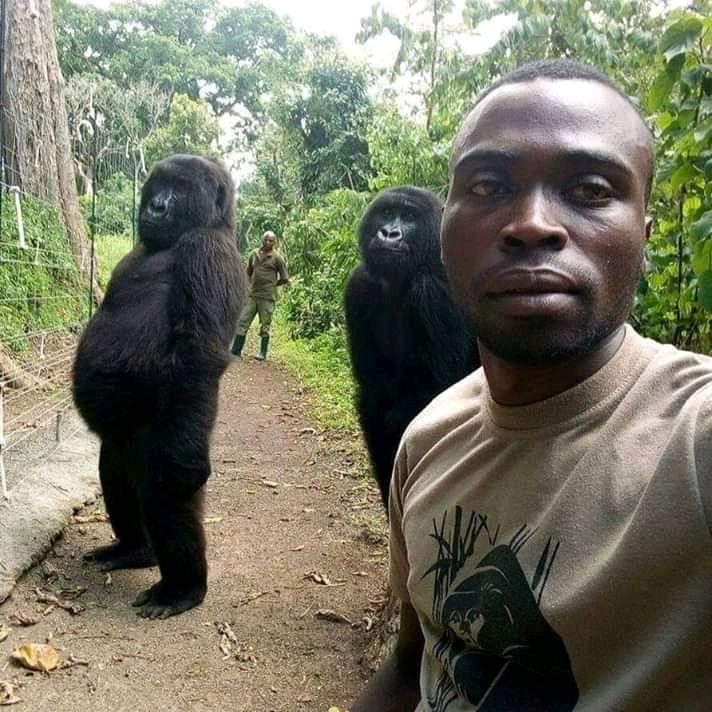 Virunga National Park is also unique with an active chain of volcanoes.

UNECSO has said: "The wide diversity of habitats produces exceptional biodiversity, notably endemic species and rare and globally threatened species such as the mountain gorilla."

Some 600 rangers work in the park, according to its website, who "go through intensive training, risking their lives on a daily basis to safeguard the park's exceptional wildlife".

Shamavu posted the photo on Saturday, with one Facebook user writing: "Such a fantastic photo! It's beautiful.".

Another said it was the "Best picture ever", and another user added: "A special thank you to you and your colleagues for helping to protect these beautifull gorillas, stay safe."