Gluas: Galway 'at a turning point' amid proposal for light rail system

A campaigner for a light rail system for Galway says the city is 'at a turning point' in terms of transport.

It comes as a new study is set to be commissioned, to examine the feasibility of introducing a light rail system for the city.

He told Newstalk Breakfast the proposed system would be lighter, and cheaper, than Dublin's Luas.

"All you have to do is just stand in Dublin and see the success of the Luas, and we have a tremendous congestion problem down here with traffic which we're trying to solve.

"And we see the solution as being a Luas-type thing". 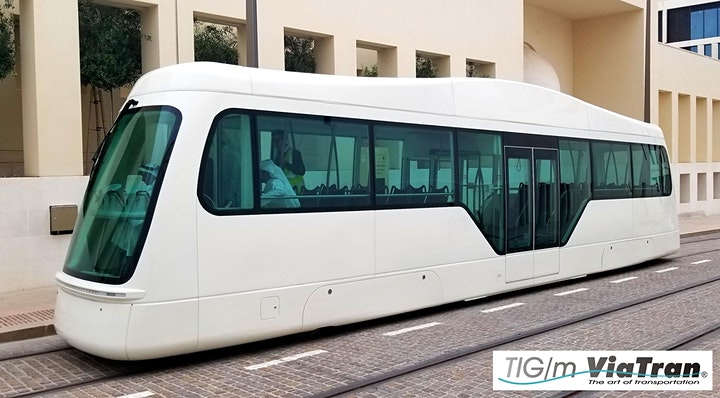 An example of a Gluas Very Light Rail train. Picture by: eventbrite.ie

He said the group recently linked up with syndicate in the English city of Coventry.

"[They] have developed a type of system which is lighter in its system and it doesn't involve digging up the whole infrastructure underneath the roads - which is why it would cost a lot less".

Mr Holland said the project has been projected as costing stg£10m (€11.52m) per kilometre - as opposed to the original €65m per kilometre price tag for the Dublin system.

"So it would work out way, way cheaper than what it would cost the Luas", he said.

Under the current proposals, a 17 kilometre line in Galway would cost around €200m.

Figures from Transdev show 48.1 million passengers were carried on Dublin's Luas lines in 2019 - or 120,000 passengers on average a day.

Host Shane Coleman suggested that Galway may not have the population to sustain a light rail system.

But Mr Holland said: "Currently they're spending 290m on a bus transport system for Galway: that's a third more than what we were talking about.

"The technology is simple, so it's not as expensive - and Coventry has identified that this is a product on which they can build a whole industry on.

"We're running a webinar to explain what we're trying to do on the 20th of April".

Mr Holland added: "The system is not going to cost a third of what it cost in the Luas.

"You have to think 50 to 100 years [ahead] in this thing: we're at a turning point here in Galway where we either go one way or the other.

"I was on the city council 30 years ago, and they were talking about solving the traffic problem with buses.

"And I'm not against buses, far from it - I would like to point out that this is not going to solve every problem.

"This is going to go a long way to solving the problem, but it's integrated into the other systems: the bus will still be there, the taxis will be still there.

"But the Gluas will attract more people".

Gluas: Galway 'at a turning point' amid proposal for light rail system