Gardaí protecting the Russian Embassy in Dublin should be put back on the beat - Lahart.

Gardaí protecting the Russian Embassy in Dublin should be put back on the beat protecting people from anti-social behaviour, according to a Dublin TD.

In the Dáil this morning, Dublin South-West TD John Lahart said up to ten Gardaí per week spend their time protecting the Russian Embassy.

Deputy Lahart said the officers are taken from Rathfarnham Garda Station, which has not been compensated for the loss of manpower.

He said they are needed on the beat to tackle a rise in anti-social behaviour, criminal damage and assaults in parks and public spaces throughout the area.

“Up to ten Gardaí per week are committed to surveillance and coverage of the Russian Embassy because of the whole Ukrainian crisis and because of protests – which are quite legitimate,” he said.

“These Garda personnel who are committed to this duty - two per shift at least as well as other, I’m sure, surveillance coverage - Rathfarnham Garda Station has not been compensated for this.

“So, every day you have two gardaí over two shifts and other Gardai I am sure involved, totally committed to coverage of the Russian Embassy who should be on duty, who should be patrolling the streets and who should be keeping the people of Tallaght and Rathfarnham and all the adjoining areas safe.”

A garda outside the Russian Embassy in Dublin, 20-04-2022. Image: Sasko Lazarov / RollingNews

He made the comments during a discussion about violence in Dublin City Centre – insisting that the only way to combat rising crime is to get more Gardaí on the streets.

“The public never see a garda out on the beat anymore and it instils a huge amount of confidence when they do,” he said.

“As a result, we have seen an increase, particularly in recent times, of assaults in our parks and in the carrying out of significant anti-social behaviour and criminal damage in our parks.

“Parks should be safe spaces for people … we need more Gardaí on the beat and in stations like Tallaght and in Rathfarnham.

“People in those local areas need to see a visible Garda presence that actually demonstrates the fact that the Government has committed additional resources to these stations.” 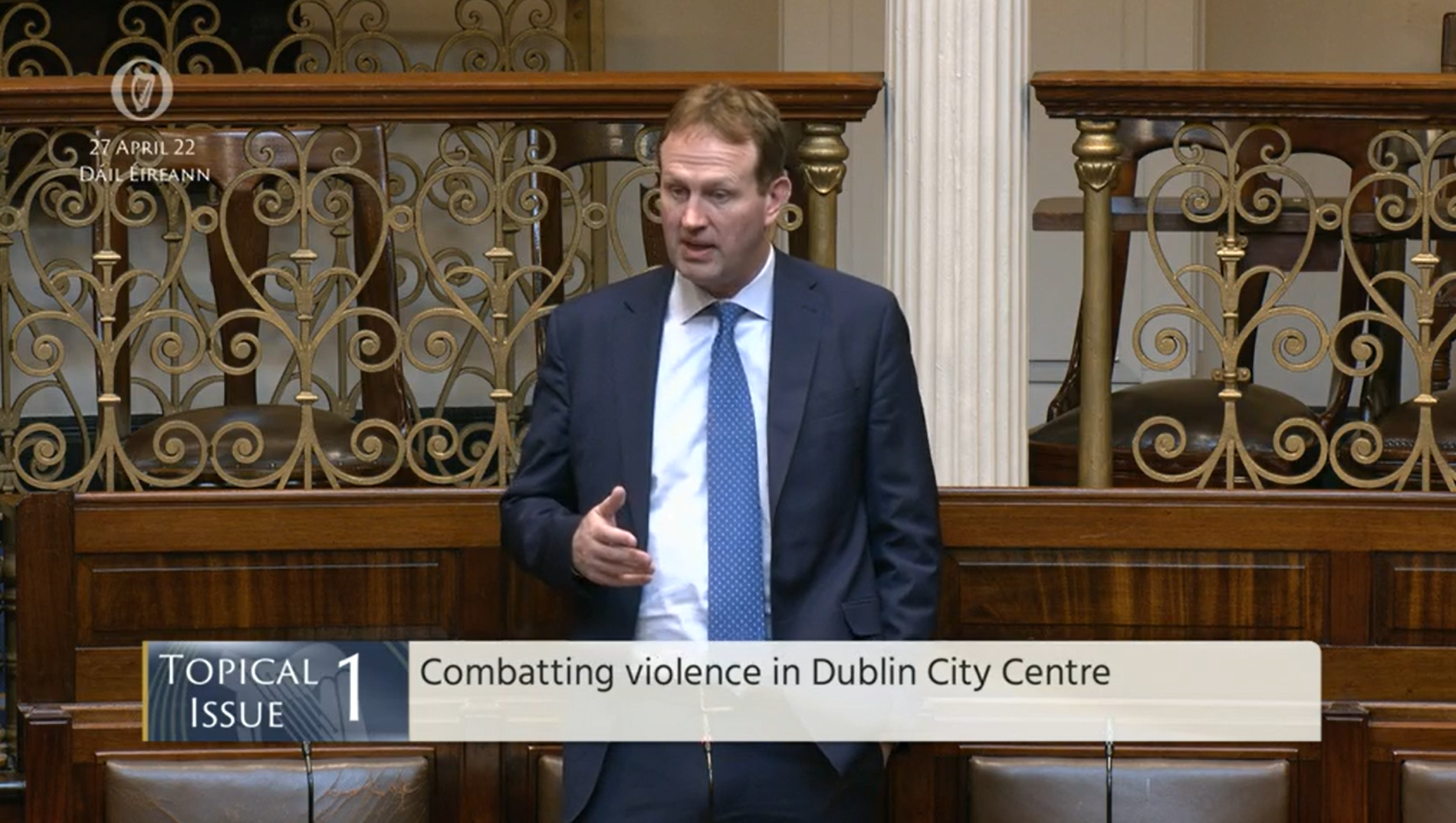 The debate was brought forward by both Deputy Lahart and Fianna Fáil TD Jim O'Callaghan.

“Gangs of youths who believe they are immune to apprehension are prowling Dublin city at night-time looking for people to attack,” he said.

“They are misogynistic towards women, they are homophobic towards gay people and in particular, they are seeking to target men in their late teens, 20s or 30s, who are on their own or just with one other person.

“We don’t have enough Gardaí on the streets at night-time.”

He warned that the lack of Gardaí on the streets will see Dublin getting an international reputation as an unsafe city – with tourism impacted as a result.