France set, and broke, its own record high temperatures several times on Friday.

Temperatures hit a record high of 45.9°C in Gallargues-le-Montueux in the south-east.

This followed two other searing hot temperatures earlier in the day.

A high of 45.1°C was recorded in the small town of Villevieille in Gard at around 3.00pm local time.

This came just an hour after another record was set for hot weather close by.

For the first time on record, #France sees a temperature above 45°C. Gallargues-le-Montueux recorded 45,9 °C, and Villevieille 45.1°C this afternoon. In France. in June. @meteofrance https://t.co/EfK5t9eCBd #heatwave #climatechange pic.twitter.com/yxGlfmUtms

This was just slightly over a previous high set in August 2003, according to Météo France forecaster Etienne Kapikian.

He says back then, Conqueyrac saw the mercury hit 44.1°C.

France has issued its highest-level danger alert, a red level warning for extreme heat, for the first time.

Authorities have put a range of precautionary measures in place - including closing schools and setting up cool-off areas in cities and parks. 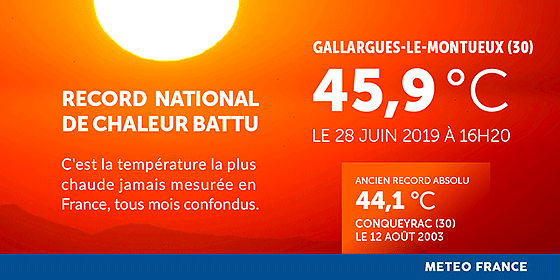 French Prime Minister Edouard Philippe said: "Measures have been taken for the most vulnerable people. But given the intensity of the heatwave, it's the entire population who must be careful today - both for oneself and for loved ones and neighbours."

Civil security services are distributing water to people around Rome, as animals at the city zoo were given ice pops.

In Milan, local media says the heatwave killed at least one person - a 72-year-old man who was reported to have been homeless - as temperatures reached 37°C.

Germany, France, Poland and the Czech Republic all recorded their highest-ever temperatures for the month June on Thursday.

Spain and Switzerland have followed suit in enforcing a high alert level, with Spain having seen its Cataluña region face its worst wildfire in two decades amid temperatures of 41°C.

Hundreds of firefighters have been battling the flames, which have spread across 5,500 hectares (12,590 acres) of hilly terrain, and so far forced dozens of people to evacuate their homes.

An 80-year-old man collapsed and died in the street in Valladolid in the north-west, and a 17-year-old boy died in the southern city of Cordoba after diving into a swimming pool and losing consciousness.