Foster on backstop: 'We have to recognise Northern Ireland is in the UK'

The DUP leader Arlene Foster claims a Northern Ireland-only backstop would be undemocratic and un...

Foster on backstop: 'We have to recognise Northern Ireland is in the UK'

The DUP leader Arlene Foster claims a Northern Ireland-only backstop would be undemocratic and unconstitutional.

The proposal, which would see the North closely follow EU rules after Brexit, has been suggested as a way to break the current impasse.

But unionists are against it, claiming it would treat Northern Ireland differently to the rest of the UK.

It comes amid reports that British Prime Minister Boris Johnson is stepping up plans for all-Ireland trade after Brexit.

The Financial Times says he will hold crunch talks with German Chancellor Angela Merkel and other EU leaders next week.

Ms Foster is in Dublin as a guest speaker at a Dublin Chamber dinner, at the Intercontinental Dublin, on Wednesday.

However Ms Foster says they could not accept the backstop measure as part of any Brexit deal.

"What we want to see is a sensible deal that works for us in Northern Ireland, of course one that works for our colleagues and our neighbours down here in the Republic of Ireland as well.

"But one that works for the UK constitutional position as well -  that's very important - and one I hope that the European Union will respect". 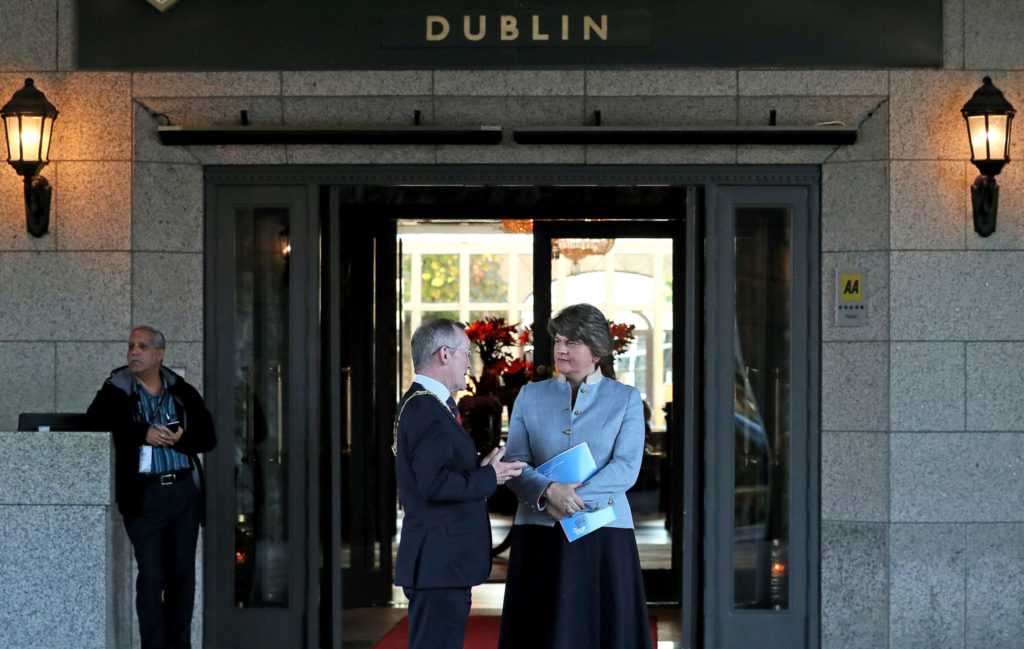 "Everybody wants to see a deal happening - I think the sort of presentation that the DUP is a no-deal party is wrong, and I think people get very alarmed when they hear that sort of rhetoric.

"We do want to see a deal but it has to be a deal that works for everybody."

"Yes we recognise we're on the island of Ireland, separated from Great Britain by water, but at the same time we're also part of the United Kingdom - so that has to be respected as well".

"What we want to see working - and the Northern Ireland backstop isn't that, by the way - because of course that would bring about customs between Great Britain and Northern Ireland.

"That is unconstitutional and undemocratic.

"I think what we want to see happening is recognition that we are on an island - we recognise that - but we also have to recognise that we're in the United Kingdom and sometimes I think people forget that".

Plenty of media interest in @DUPleader Arlene Foster as she arrives to speak at our Dinner in Camera event in the @InterConDublin this evening. Delighted to have her speaking to our members at such a crucial time. #ConnectingDublin #Brexit pic.twitter.com/1hEGmvIwvf

Later during her speech, Ms Foster said: "I know that many in the Republic were both shocked and disappointed at the outcome of the United Kingdom's referendum on its membership of the European Union.

"Having reached a new and settled partnership with the United Kingdom, Ireland, understandably feared for the future and the impact the outcome of the result would have.

"I respect the fact that Ireland has sought to bring about solutions which would keep the UK in the closest possible future relationship with the European Union but equally Ireland has to recognise that the referendum result has to be upheld and that ultimately it is for the government of the United Kingdom to determine whether future arrangements are compatible with the referendum result."

"We are living, and working, through momentous times.

"The upheaval and the changing circumstances have placed strains on relationships both North and South as well as between London and Dublin.

"As the leader of unionism in Northern Ireland I want to reassure you, that as your neighbours and regardless of the final outcomes on Brexit we must work together in the future as friends and neighbours.

"We must do so in a spirit of co-operation recognising that through mutual respect and co-operative working we can successfully deliver for all those who, whether they live in Northern Ireland or the Republic, call this island home."

"Those who know anything about Northern Ireland will appreciate that long-term arrangements cannot be secured in Northern Ireland unless supported by a majority of unionists and nationalists.

"The majority of unionists do not and will not support the arrangements as envisaged in the backstop as set out in the draft Withdrawal Agreement.

"At its heart, the Belfast Agreement recognises that parallel consent is required."

"So if we are to secure a Brexit agreement then it requires the European Union in particular to recognise that unionist consent must be forthcoming."

Proposals 'not yet been made'

Meanwhile, the outgoing European Commission President Jean-Claude Juncker says the EU is still waiting for alternatives to the backstop from the British government.

He met Mr Johnson in Luxembourg on Wednesday.

Following the meeting, a spokesperson for Mr Juncker says it was aimed at 'taking stock of the ongoing technical talks' between the EU and UK.

"President Juncker recalled that it is the UK's responsibility to come forward with legally operational solutions that are compatible with the withdrawal agreement", a statement says.

"President Juncker underlined the commission's continued willingness and openness to examine whether such proposals meet the objectives of the backstop. Such proposals have not yet been made."

It was shelved after the DUP said it would pull the plug on the British government if it went through.

That led to Downing Street's request for the backstop to be amended to include the entire UK.

Mr Coveney said: "We have a Withdrawal Agreement today that responds to all of that complexity in a very comprehensive way and if the UK government wants to change that, then they have to provide comprehensive answers in terms of the alternative arrangements they are proposing to the backstop.

"Otherwise, we need to see a backstop; either-UK wide or Northern Ireland-specific.

"Either, from our perspective, can represent a way forward."