Jean-Claude Juncker has said the EU is still waiting for alternatives to the backstop from the Br...

Jean-Claude Juncker has said the EU is still waiting for alternatives to the backstop from the British government.

The European Commission President met Prime Minister Boris Johnson in Luxembourg today, amid ongoing efforts by the British government to secure a new Brexit deal ahead of the October 31st Brexit deadline.

It was their first face-to-face talks since Mr Johnson took office during the summer.

The EU's chief negotiator Michel Barnier and the UK's Brexit secretary Stephen Barclay are among the other officials who are meeting in Luxembourg today.

If any new deal is to be secured it will likely have to happen before the European Council summit in mid-October.

Following today's meeting, a spokesperson for Mr Juncker said the meeting was aimed at 'taking stock of the ongoing technical talks' between the EU and UK.

The statement says: "President Juncker recalled that it is the UK's responsibility to come forward with legally operational solutions that are compatible with the withdrawal agreement.

"President Juncker underlined the Commission's continued willingness and openness to examine whether such proposals meet the objectives of the backstop. Such proposals have not yet been made."

The statement adds that the Commission remains available to work "24/7". 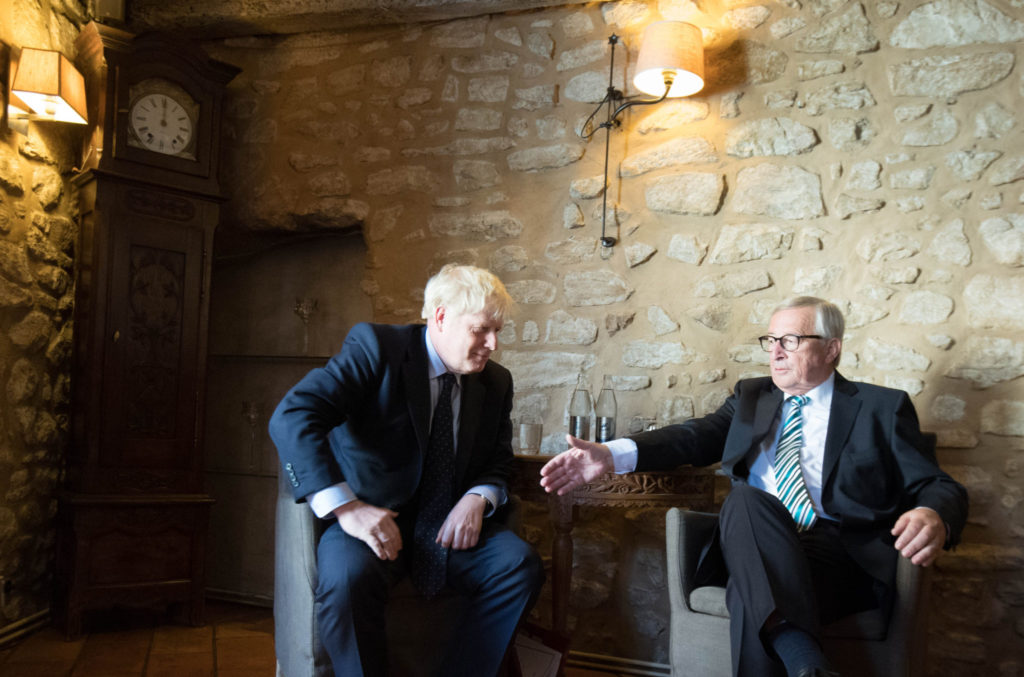 Meanwhile, the British government said the meeting was "productive".

A spokesperson for Downing street said: "The PM confirmed his commitment to the Good Friday / Belfast Agreement and his determination to reach a deal with the backstop removed.

"The PM also reiterated that he would not request an extension and would take the UK out of the EU on the 31st October."

The statement adds that discussions will intensify, and that Mr Barnier and Mr Barclay will hold talks "at a political level".

Ahead of today's meeting, Mr Johnson claimed he "passionately" believes a deal can be struck within the next few weeks.

Writing in the Daily Telegraph, he argued: "If we can make enough progress in the next few days, I intend to go to that crucial summit on October 17, and finalise an agreement that will protect the interests of business and citizens on both sides of the Channel, and on both sides of the border in Ireland.

"Be in no doubt that if we cannot get a deal – the right deal for both sides – then the UK will come out anyway."

He also criticised opposition parties and Tory rebels in parliament for passing legislation aimed at blocking a no-deal Brexit - claiming the bill is "making any Brexit deal harder to achieve".

However, Sky News correspondent Enda Brady suggests it will be a difficult path to any deal.

He explained: "[Mr Johnson] seems to believe that by simply having Northern Ireland basically operating along the same lines as the Republic in terms of relationships with the EU [that] that will remove the backstop completely.

"He has one month now to find something that Theresa May could not find, implement, get through parliament or please Brussels with in three years."

Today's meeting between Mr Johnson and Mr Juncker has led to some cautious optimism that progress is being made - and yesterday Stephen Barclay insisted there is a "landing zone" in sight.

The EU, however, has repeatedly stressed it's up to the UK to come forward with workable alternatives to the Irish backstop - which Mr Johnson has demanded must go in any deal.

Bobby McDonagh - a former Irish Ambassador to the UK and the EU - said: "The European Union has been very calm and very reasonable throughout this process.

"They're waiting for some proposals that respect the withdrawal agreement.

"If there's something creative and something new, I think they will look at it."

Meanwhile, Mr Johnson has faced pushback after comparing Brexit to the Incredible Hulk.

He suggested the UK could break free of the EU's 'manacles' if no deal is reached next month.

The comparison was criticised by the EU's Guy Verhofstadt as "infantile", while Mark Ruffalo - the actor who plays the Hulk in the recent Avengers films - took to Twitter to question Mr Johnson's analogy:

Boris Johnson forgets that the Hulk only fights for the good of the whole. Mad and strong can also be dense and destructive. The Hulk works best when he is in unison with a team, and is a disaster when he is alone. Plus...he’s always got Dr. Banner with science and reason. pic.twitter.com/jN8BDzgpWl