A former stage manager to the rich and famous is thanking his own lucky stars after he was rescue...

A former stage manager to the rich and famous is thanking his own lucky stars after he was rescued by a Cork lifeboat crew over the weekend.

Pete Currier had been on a solo expedition from the Caribbean island Carriacou en route to the UK when his yacht got into difficulty.

Mr Currier has worked with international bands such as U2, Nirvana, UB40 and the Rolling Stones on their tours and concerts.

However, he decided to swap the rock 'n' roll lifestyle for a solo voyage that would take him on a 6,500km journey across the Atlantic.

He departed Carriacou on May 13th, but three weeks in, his 51ft vessel lost engine power, forcing the skipper to continue his trip under sail.

The yachtsman was stuck for ten days at one stage without wind, but when he resumed his voyage, the sails were damaged which further hampered his progress.

They said it was travelling "at three knots per hour with no prospect of reaching its intended destination", which was the UK.

Rescue volunteers tracked the boat online throughout the day and grew "increasingly concerned for its safety". 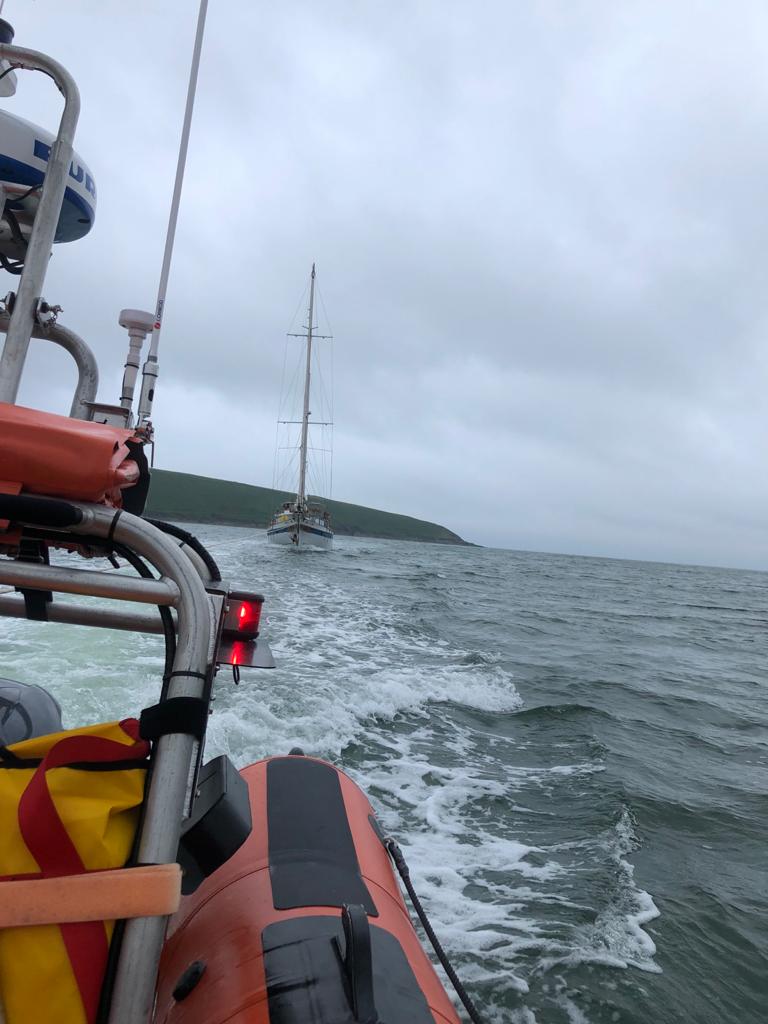 Kinsale RNLI towing the vessel to the harbour. Credit: RNLI/Kinsale

They launched their lifeboat at 6pm on Saturday, and eventually found Mr Currier off The Old Head of Kinsale.

The stricken yacht was then towed to Kinsale harbour, with RNLI member Felix Milner on board to "safeguard the wellbeing of the skipper, who was exhausted but uninjured despite his long ordeal".

Mr Currier then got to enjoy his first hot shower in seven weeks after arriving in the coastal Cork town just after 9pm.

He was also reunited with his son and two daughters, who live in West Cork and were waiting for him on the pier.

The 68-year-old said RNLI Kinsale were "some of the nicest people" he has ever met.

"Their expertise and commitment leave me humbled. It is an institution I have always supported and will do so for the rest of my days," he added.

'Salt of the earth' rescuers

In a subsequent post on Facebook, Mr Currier further praised the "lovely chaps" from the lifeboat crew.

"They helped me pump up my dingy and get the outboard back on it, took me to the lifeboat station for a hot shower," he said.

"Told me repeatedly what a lovely boat and even offered to take my laundry home and wash it for me. Absolute salt of the earth. I’ve always supported the life boats wherever I’ve been and will always continue to do so.

"I felt very strange walking on something that doesn’t move. My son bought me crab claws fresh salad and fruit. Now to sleep for more than an hour and in a bunk not on a bench.

"It is a tribute to the yachtsman’s seamanship that he made a 6,500km voyage single-handed and remained calm and focused despite the many problems he encountered in the course of his journey," he said.

"He is very fit and able but was clearly exhausted after 52 days alone at sea and it was the right decision to help him over the final hurdle and bring him safely to Kinsale."