Trump: China moving troops to the border with Hong Kong

The US President Donald Trump has claimed the Chinese government is moving troops to the border with Hong Kong.

In a tweet, he said US intelligence has informed him of the move.

"Everyone should be calm and safe!", he added, without offering further information or clarification about troop movements.

Our Intelligence has informed us that the Chinese Government is moving troops to the Border with Hong Kong. Everyone should be calm and safe!

It comes as Hong Kong International Airport suspended all outbound flights for the second day in a row as pro-democracy protests continue.

Protesters are refusing to leave the airport, after riot police were sent to disperse them.

Violent clashes broke out earlier, and a man suspected of being an undercover officer was cable-tied to a trolley.

The wider pro-democracy protests are now in their 10th week.

Protesters say they are focusing on the airport because they believe riot police will not confront them there. 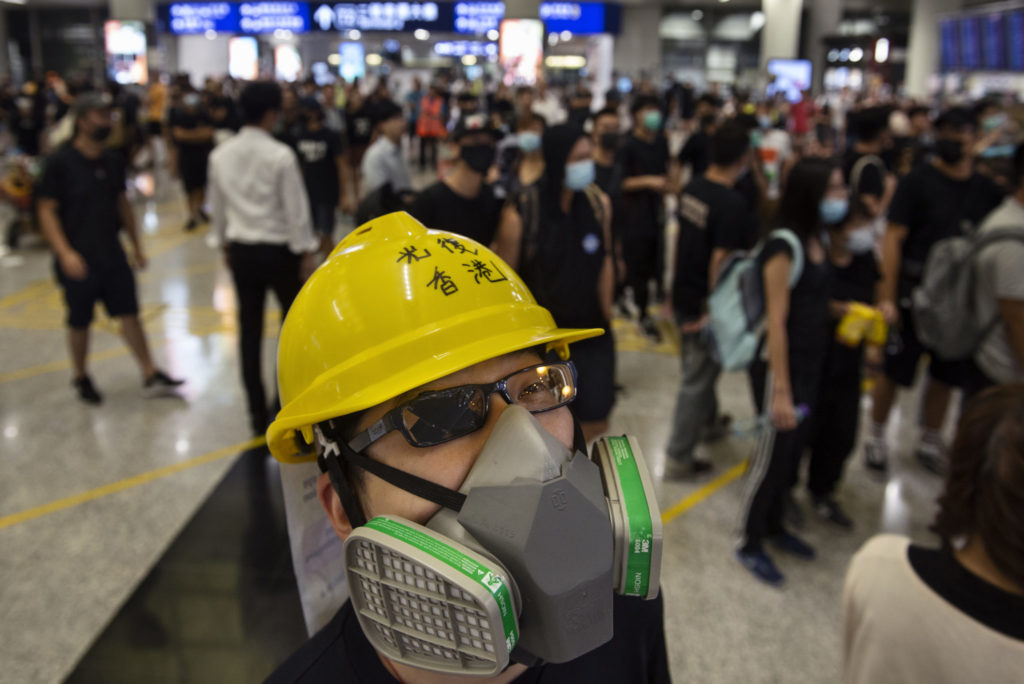 The airport re-opened on Tuesday morning after authorities took the unprecedented step of cancelling all flights on Monday.

However, check-in services were suspended again at 4:30pm local time (9:30am Irish time).

"Terminal operations at Hong Kong International Airport have been seriously disrupted, and all check-in processes have now been suspended," the airport said in a statement.

"All passengers are advised to leave the terminal buildings as soon as possible. Affected passengers please contact their respective airlines for flight arrangement."

Chinese airline Cathay Pacific advised passengers not to travel to the airport and said there was the "potential for further flight disruptions at short notice."

It said passengers were encouraged to "postpone non-essential travel from Hong Kong" today and tomorrow.

The Airport Authority of Hong Kong has advised that all check-in services for departing flights have been suspended.
Passengers are advised not to proceed to the airport. 1/2

The protests originally broke out over a planned extradition law that demonstrator warned could be used to send dissidents to mainland China, where they could be denied proper justice.

They have since grown into a movement calling for greater democratic protections and an end to police violence against demonstrators.

Protesters want the territories CEO Carrie Lam to stand down and free elections to be held to replace her.

Ms Lam has said the extradition bill is "dead" - however it has not yet been officially withdrawn.

She has warned that the territory has been pushed into a "state of panic and chaos" and could enter "the abyss."

She told reporters: "I ask everybody again to put aside our differences and calm down, take a minute to look at our city, our home.

"Can we bear to push it into the abyss and see it smashed to pieces?"

She said the city may "take a long time" to recover from the unrest.

Beijing's response to the protests appears to be hardening with the country's China's Hong Kong and Macao Affairs Office on Monday labelling them an "existential threat" and warning that the central government will show "no leniency or mercy."