The Minister for Justice has defended the Garda response to the ongoing gang feud in Drogheda. In...

The Minister for Justice has defended the Garda response to the ongoing gang feud in Drogheda.

In the last six months there have been at least 74 serious crime incidents in the Louth town – including a number of petrol bomb attacks and an attempted murder within the last week.

It is believed the crime spree is linked to a feud between two gangs fighting for control of the drug trade in the area.

Speaking at a press conference alongside the Garda Commissioner at Drogheda Garda Station last night, Justice Minister Charlie Flanagan said the violence will not be tolerated.

“I am very conscious of the very positive reputation of the town of Drogheda and its people and I am not going to tolerate a situation where a very small number of people bring this town into disrepute,” he said.

“Every effort will be made to stop this unacceptable behaviour.”

The rise in violence led to calls from rank-and-file gardaí for 24-hour Armed Support Units to be established in every division in the country.

Commissioner Drew Harris has pledged to send 25 extra Garda members to the town next month to deal with the ongoing feud.

He said the Emergency Response Unit has also been drafted in to support local gardaí. 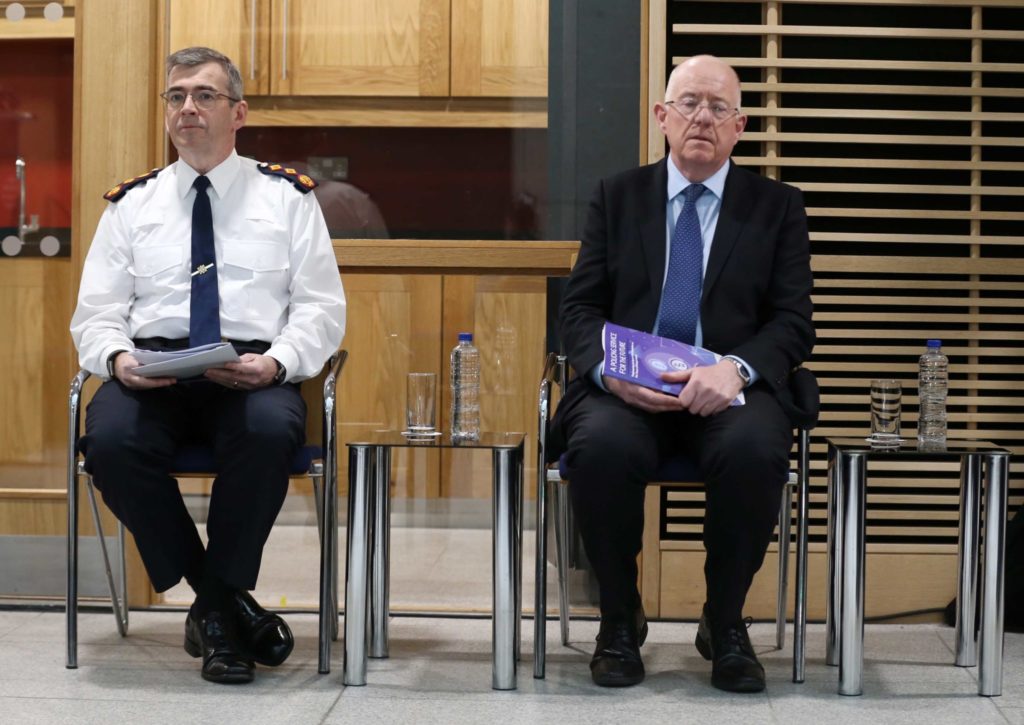 File photo of the Garda Commissioner Drew Harris and Minister for Justice Charlie Flanagan at the launch of the Policing Service for the Future report, 18-12-2018. Image: Sam Boal/RollingNews

Minister Flanagan insisted Gardaí are doing all they can to catch those involved.

“There has been an ongoing development here in Drogheda over the past number of months,” he said.

“I visited here just before Christmas and got a detailed briefing.

“I saw myself the success on the part of the Garda Síochana here in terms of successful searches, a recovery of firearms and other materials and a number of arrests.

“I am satisfied that a concerted and sustained effort in underway on the ground here in Drogheda.”

He moved to reassure the people of Drogheda that ‘Operation Stratus’ which has been ongoing in the town for a number of months will bring the gang members to justice.

Gardaí in Drogheda said a number of innocent bystanders “very narrowly avoided being shot and seriously injured” in last week’s “callous and reckless” shooting attack in the town.

A 36-year-old victim was hospitalised after being shot a number of times in the leg and shoulder during the attack – which investigators believe was a murder attempt.

Meanwhile a group of youths threw a “suspect device” through the window of a house in the Moneymore area of the town just before midnight on the night of Thursday 25th.