Russian troops are encountering fierce resistance from Ukrainian soldiers and civilians as they f...

Russian troops are encountering fierce resistance from Ukrainian soldiers and civilians as they fight their way west to the capital Kyiv.

President Volodymyr Zelensky has shunned western offers of evacuation and instead stayed to fight alongside his country men and women as they resist invasion.

“Good morning everybody. Do not believe fake news. I am here,” Mr Zelensky said in a video posted on social media.

Ukrainian authorities have handed out 18,000 guns to volunteers - many with no military experience - and instructions have been issued on how to make petrol bombs.

The BBC reports that all of Ukraine’s cities remain in government hands. However, 35 people were injured in the capital Kyiv last night and Mayor Vitali Klitschko blamed Russian saboteur groups. Two children are among the wounded.

“The Russians seem to be having trouble advancing... on Kyiv,” journalist Euan MacDonald told The Anton Savage Show.

“The Ukrainian forces are apparently blocking their advances from both the north, west and the north-east.

“I’ve seen pictures on social media of Russian armed personnel carriers and tanks apparently stranded on the road having run out of fuel.

“This is very possibly true because I think the Russians had expected to move much more quickly on Kyiv… They haven’t managed to do that because the Ukrainian resistance has been so strong.”

Already tales of heroism and defiance have made household names of previously unknown soldiers and civilians; on a small island in the Black Sea, 13 Ukrainian border guards were killed by a Russian warship after they refused to surrender.

All 13 were killed and Mr Zelensky has awarded each of them the title of ‘Hero of Ukraine’. 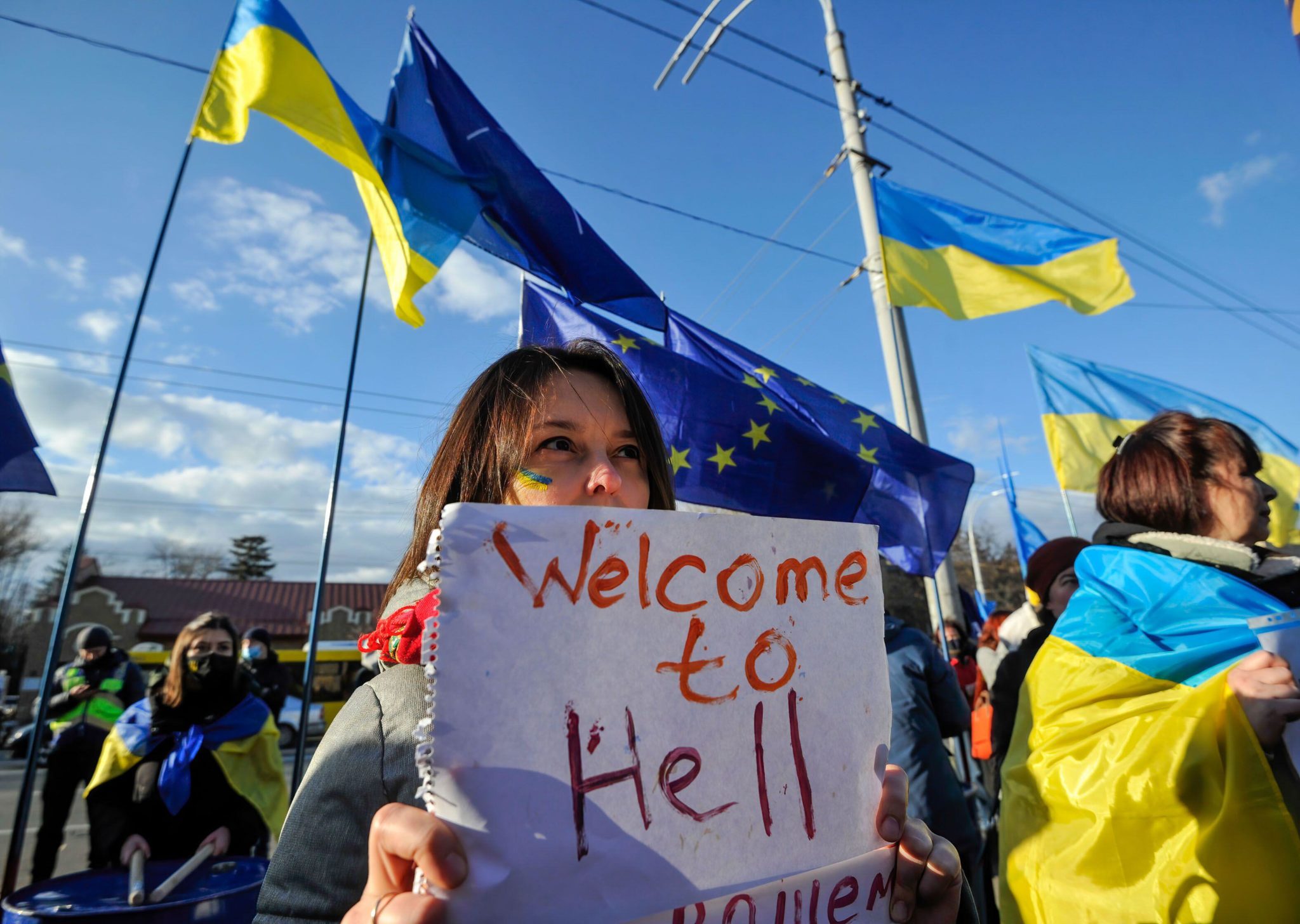 A Ukrainian protester seen holding a placard expressing her opinion during the rally called "Empire must die" near the Russian embassy.

In the Kherson region a young military engineer called Vitaliy Skakun Volodymyrovych died whilst blowing up a bridge in order to stop a Russian advance.

The bridge connects Crimea with the Ukrainian mainland and Mr Volodymyrovych volunteered to mine it with explosives.

"The bridge was mined, but he didn’t manage to get away from there," a Ukrainian official explained.

"According to his brothers in arms, Vitaliy got in touch [with them] and said he was going to blow up the bridge. Immediately after an explosion rang out."

The move is credited with “significantly slowing down the advancement of the enemy" and allowed Ukrainian troops to regroup and redeploy. Mr Volodymyrovych will also be honoured posthumously for his bravery.

Make no mistake. Ukrainians will prevail. We fought against the Russian and Soviet empires in the past and – always – freedom and democracy won the day. We need your support now. Support the Ukrainian Army and economy. Let’s #StopRussianAggression together https://t.co/pVX50pPtVd

In the port city of Henichesk, close to Crimea, a viral video shows a woman striding purposefully towards the invaders.

“We have exercises here. Please go away,” a Russian soldier replies.

“You’re occupants, you’re fascists!” she replies and pulls out a fistful of sunflower seeds.

“Take these seeds and put them in your pockets so at least sunflowers will grow when you all lie down here.

“Put the sunflower seeds in your pockets, please. You will lie down here with the seeds. You came to my land. Do you understand? You are occupiers. You are enemies.”

Sunflowers are Ukraine’s national flower and the woman has been hailed as symbolising the defiance and fury of a nation in the face of invasion and peril.

Russia is 70% ready to invade Ukraine, US officials claim