Fianna Fáil TDs apologise for absentee voting in the Dáil

Four Fianna Fáil TDs have apologised in the Dáil over absentee voting. A report into the practi...

Fianna Fáil TDs apologise for absentee voting in the Dáil

Four Fianna Fáil TDs have apologised in the Dáil over absentee voting.

A report into the practice earlier did not recommend any sanctions against the TDs involved.

The Ceann Comhairle Seán Ó Fearghaíl ordered the investigation after it emerged Fianna Fáil TD Niall Collins voted on behalf of his colleague Timmy Dooley while he was not in the Dáil chamber.

She said she recorded the vote by mistake after sitting in the wrong seat.

She then moved to her own seat, voted again and did not correct the record.

Deputy Chambers said: "The vote was lost by a large number, so I did not inform the teller at the time of the vote cast in error as I genuinely thought it was an insignificant error.

"I fully accept now that I should have done so at the time, and I sincerely apologise to this House and to the public for not doing so".

While Deputy Dooley said: "Ceann Comhairle, I want to take this opportunity to apologise to you and to every member of this House for what happened here last Thursday.

"Since 2002 I have been honoured to serve as both a Senator and a Deputy - it has been a privilege to serve in these Houses. 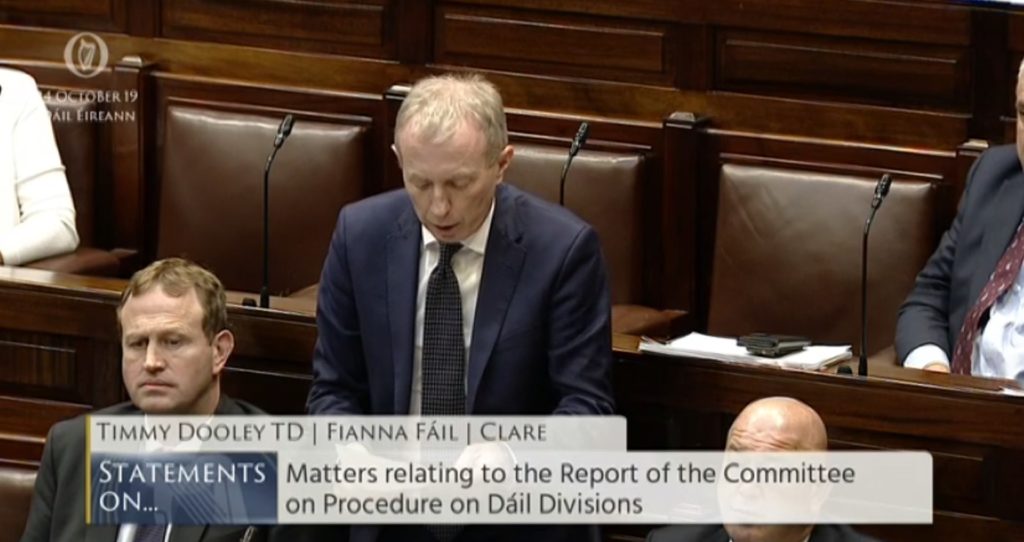 "But with that privilege comes responsibility - and I accept that last Thursday, I fell short on the responsibility that rests on me as a member of this House".

"I want to apologise to the House for the fact that when I spoke to Deputy Collins last Thursday, I gave him the impression that I would be in this chamber during the voting bloc".

"I did not ask Deputy Collins to vote for me, and I did not inform him that I was leaving the chamber".

Deputy Collins said: "At the outset, I wish to sincerely apologise for my role in what happened.

"I want to apologise to you Ceann Comhairle, to all members of Dáil Éireann - it would never be my intention to bring such negative undue attention to our work here.

"We all understand the immense privilege it is to serve in this House - and to the people of Limerick and the wider public, I offer my sincere apologies too". 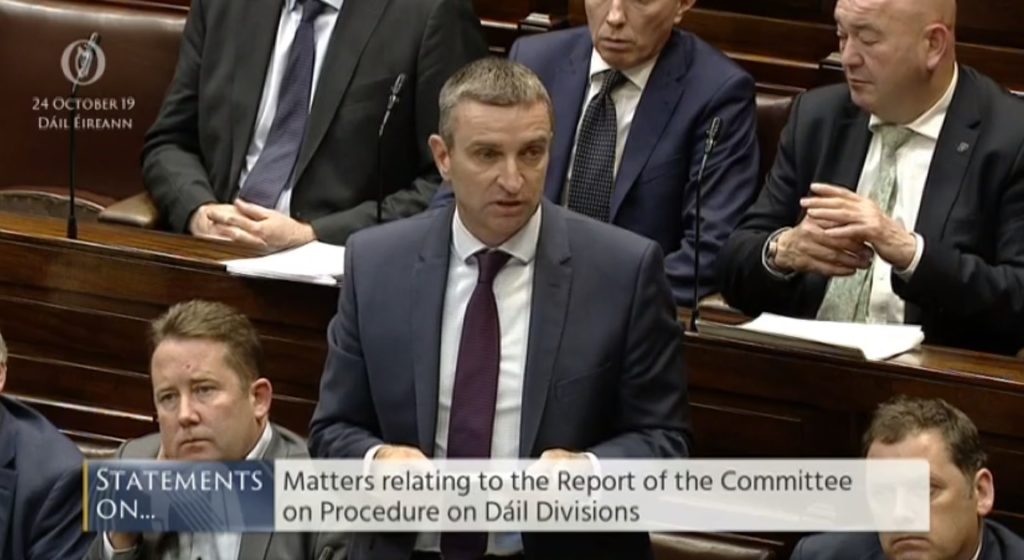 Deputy Barry Cowen also said: "I want to apologise for this informality and carelessness on my part.

"That carelessness allowed the integrity of the voting system to be questioned: I should have sat in my own seat and I should have cast my own vote".

Party leader Micheál Martin said it was unacceptable, but was also defensive in his speech.

He said: "At the outset it is important to say that serious issues of public concern have been raised and must legitimately be addressed.

"I want to acknowledge the work of those who brought this matter to public attention.

"If we put aside for one moment the behaviour, motivation and record of many here who clearly have no interest in dealing with this matter with any balance, there are three broad issues involved.

"These involve general practices here during voting, a specific incident involving a division here last week and what changes we need to make."

He added: "Fine Gael's claim to be outraged has been more than a bit undermined by the sound of laughter and backslapping coming from their corridors together with daily briefings about immediately holding an election they claim not to want until next spring."

He also said that he took "early action" in relation to Deputies Collins and Dooley - and that a sanction against them remains in place.

The report was submitted to a private sitting of the Dáil Committee on Procedures on Thursday morning.