Jason said his son, who has dyspraxia and autism, has faced bullying from the first week of secondary school

The father of a 13-year-old boy has said he is willing 'to go to jail' to highlight his son's bullying in school.

Jason said his son, who has dyspraxia and autism, has faced bullying from the first week of secondary school.

He told Lunchtime Live a Snapchat video of his son being assaulted was also making the rounds.

"From straight away the bullying had started - kids were hitting him, kicking him, shoving him, punching him," he said.

"During PE they were spraying him with deodorant, they were taking his clothes, they were putting them in bins, they were hiding his shoes.

"The worst thing was a video went around the school on a Snapchat group of him lying on the ground being kicked, punched - just him lying there in pain and the children walking away bragging about how they hurt him".

'Coming through the door crying'

Jason said he contacted the school and felt "really let down by it".

"The way I spoke to the principal was I said, 'It's now become socially acceptable to do this to my son'".

He said they actually first heard about the bullying from parents of other children.

"It was actually a member of the schoolboard that showed us the video of him lying on the ground in bits.

"When you start asking him other questions, he'd let something out - and you'd have to try get it out of him.

"It started from trying to force it out [of him] to him just coming through the door crying."

'Why should his freedom be taken?'

Jason said as bad as all that was, the school was worse.

"My son came home that evening and said that there was four children suspended."

He said the school also put four measures in place to stop the bullying, which Jason said were "absolutely disgraceful".

This included asking his son to wait until everybody else had left a classroom in-between class. 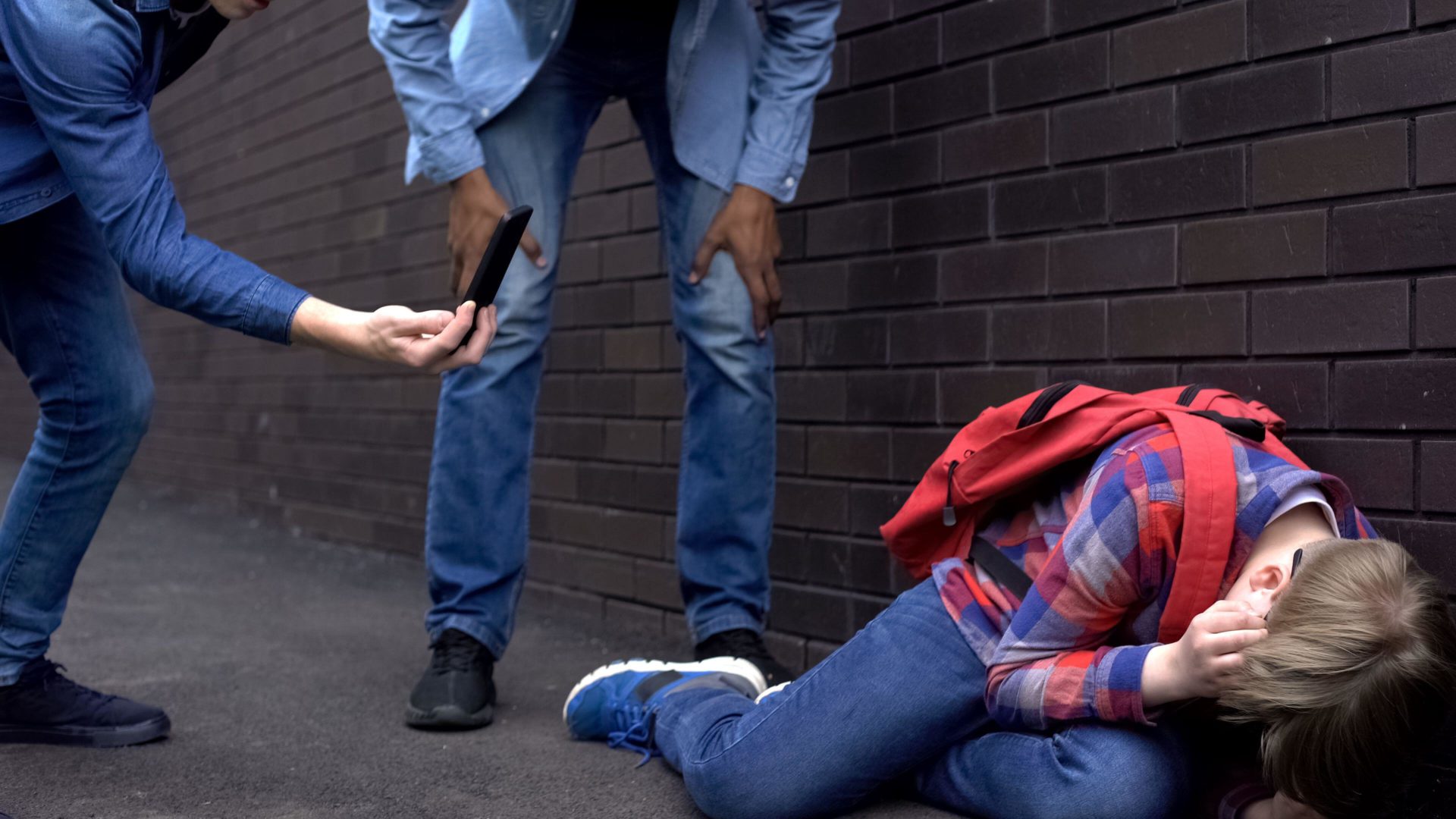 Teenagers mocking a boy and broadcasting on a smartphone. Picture by: Ievgen Chabanov / Alamy Stock Photo

"On the Friday morning, he said the kids that were picking on him had left [the classroom] - there was a couple still packing up," he said.

"He was worried about being late for his next class, so he left; and the vice-principal took him out of the next class and corrected him for leaving the class before everyone else had left.

"They also asked him not to go to his locker until everyone else is done, on the school bus he was not allowed within a certain amount of rows of these kids or to see them.

"They put a set seat at the front of the bus for him - but why should his freedom be taken if every other child has the right to choose their own seat?

"The worst one was the lunchbreak: he's not aloud outside on his lunchbreak, they told him 'On your lunchbreak go into the resource room and read a book'".

Jason said even though his son is moving schools, he has to do something.

"I would have done it this week, but there's exams on.

"Whether it's right or wrong I really feel like it has to be highlighted, the community has to know, and the school has to realise that they have to deal with these issues.

"Myself, my family, my friends, a couple of my work colleagues, we're all going blocking it.

"I'm not really sure, the Garda station is literally a minute's drive away - I don't plan on leaving, I'm willing to go to jail for it I really am.

"I won't move, I'll go to jail, I'm prepared to do that because I think it's just so wrong".

He added: "I felt like I failed him, I'm meant to be able to go in there and speak with them and to sort this: we're adults."