The EU Trade Commissioner Phil Hogan has appealed to farmers to enter back into discussions at th...

The EU Trade Commissioner Phil Hogan has appealed to farmers to enter back into discussions at the Beef Market Taskforce.

His comments come as they continue their campaign for an increase in the price of beef with a protest in Co Cork.

Around 50 farmers are blocking lorries at Lidl distribution centre in Charleville.

It follows a 12-hour protest outside an Aldi distribution centre in Co Kildare on Thursday.

IFA president Joe Healy said the protesters will continue until farmers are given a "significant price increase" for the beef they produce.

"Retailers have a powerful grip on the food chain and cannot shirk their responsibility to farmers," he said.

"There is too much buck-passing between processors and retailers in their rush to grab all the profits, leaving farmers in a loss-making situation."

He said farmers have continually warned that retailers had to be represented at beef talks if the dispute was to be resolved.

He said the prices offered to farmers have been "well behind the EU and UK beef price for weeks."

"Farmers are justified in seeking an immediate and meaningful increase in the price of beef," he said.

"We have had enough excuses from both processors and retailers. Our message to the retailers is clear: tell your beef processors to give their farmers a price increase.

"We will continue to take action until processors give a significant price increase." 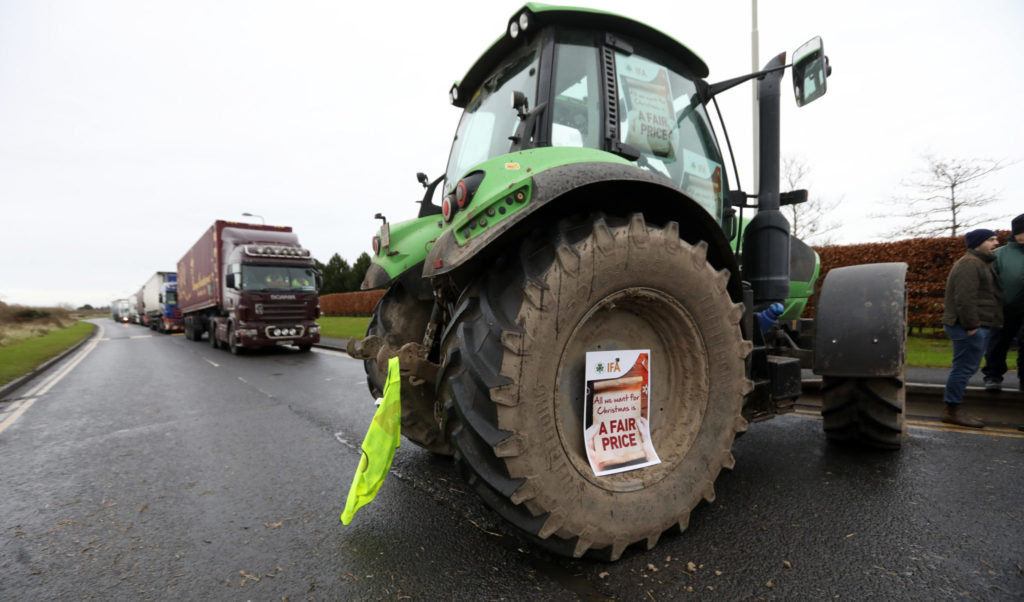 Meanwhile food group ABP has confirmed it will increase the base price of cattle for deliveries from next Monday.

A spokesperson for ABP strongly criticised the IFA over a number of protests at retail distribution centres this week.

They said: "The company is at a complete loss to understand why Joe Healy, the outgoing IFA president, pursued a course of irresponsible, disruptive and illegal action at retail distribution centres this week.

"The Beef Taskforce met on Tuesday and Joe Healy and the IFA were fully aware that market indications pointed towards a cattle price increase in Ireland. This was reported extensively.

"Joe Healy is also aware that cattle prices are quoted on a Friday and the timing of this stunt was motivated by competition for membership between traditional and new farm organisations."

They added: "The price paid by ABP for cattle will always be determined by the prevailing market conditions and those conditions have recently improved.

"ABP can confirm, as was indicated on Tuesday at the Beef Taskforce, that it will increase the base price of cattle for deliveries from next Monday.
"The actions, this week, of Joe Healy, the outgoing IFA president, were needless and irresponsible."

Earlier this week, the Beef Market Taskforce met for the first time after months of delay.

The taskforce was set up to provide a forum to resolve the disputes in the sector.

Speaking in Dublin, Commissioner Hogan said he wants communication rather than confrontation.

"I would appeal to the farmers to get into the negotiations, get into the taskforce meetings and implement the deal that is already on the table".

"I allocated up to €100m from the beef sector - €50m coming from Europe - because we recognised that there was a serious problem of incomes in relation to our beef farmers, over and above any other sector in agriculture.

"So we have played our part in acknowledging the difficulties they're going through.

"There was a deal on the table, there was discussions, now we have to implement it.

"I think it's better to have cooperation and dialogue rather than confrontation".