The European Parliament has passed controversial new copyright laws that critics have warned could threaten the nature of the internet.

The package of legislation, designed to update European copyright law for the digital age, was passed by 348 votes to 274.

A last minute proposal to remove the Directive's most controversial clause - Article 13 or the 'upload filter' - was rejected by five votes.

Publishers, record companies and content creators have championed the Directive - however, digital rights activists have warned that they threaten internet freedoms and will destroy user-generated content.

Thousands of people marched against the proposals in countries across Europe last weekend.

EU states will now be asked to approve the decision and, if they agree, will have two years to bring them into force.

Julia Reda, MEP for the German Pirate Party said it was a "dark day for internet freedom."

Dark day for internet freedom: The @Europarl_EN has rubber-stamped copyright reform including #Article13 and #Article11. MEPs refused to even consider amendments. The results of the final vote: 348 in favor, 274 against #SaveYourInternet pic.twitter.com/8bHaPEEUk3

The European Digital Rights Initiative said Article 13 has "dangerous potential for automatised censorship mechanisms" and warned that "online content filtering could be the end of the internet as we know it."

"Disappointingly, the newly adopted Directive does not benefit small independent authors, but instead, it empowers tech giants," said Diego Naranjo, Senior Policy Advisor at the EDRi.

"More alarmingly, Article 13 of the Directive sets a dangerous precedent for internet filters and automatised censorship mechanisms – in the EU and across the globe."

The campaign group Open Knowledge International (OKFN) said it was a "massive blow" for the internet.

.@C_Stihler: EU #copyright vote a ‘massive blow’ for internet users - we now risk the creation of a more closed society at the very time we should be using digital advances to build a more open world where knowledge creates power for the many, not the few: https://t.co/Y1AE6oDU1F

"We now risk the creation of a more closed society at the very time we should be using digital advances to build a more open world where knowledge creates power for the many, not the few," said OKFN Chief Executive Catherine Stihler.

"But while this result is deeply disappointing, the forthcoming European elections provide an opportunity for candidates to stand on a platform to seek a fresh mandate to reject this censorship." 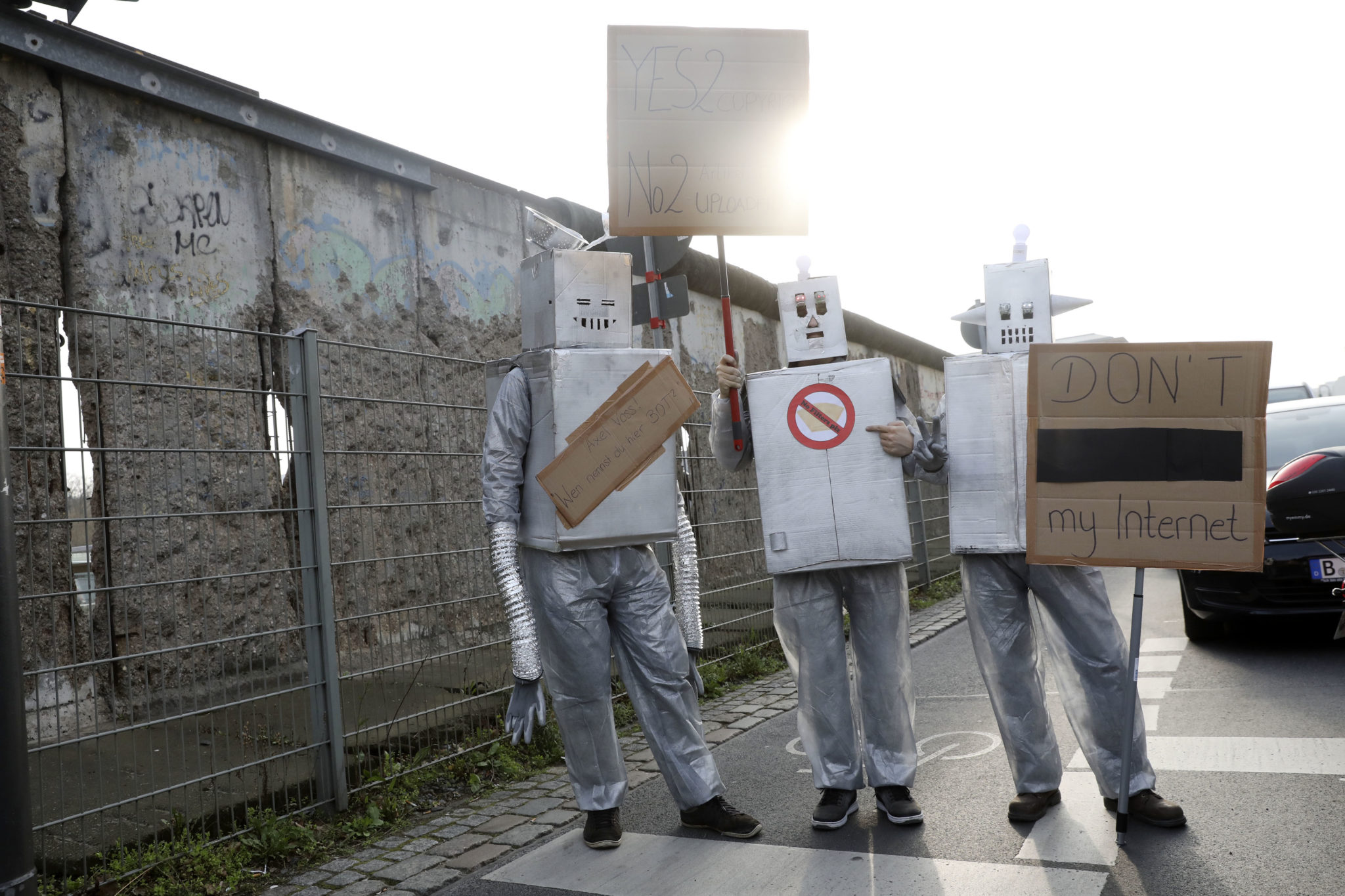 More than 10,000 people protested against the copyright reform of the EU in Berlin, 23-02-2019. Image: Ben Kriemann/Geisler-Fotopress/DPA/PA Images

"Creativity in the digital age"

In a joint statement, the Vice-President for the Digital Single Market, Andrus Ansip and the Commissioner for Digital Economy and Society, Mariya Gabriel said the directive "protects creativity in the digital age and ensures that the EU citizens benefit from wider access to content and new guarantees to fully protect their freedom of expression online."

"Today's vote ensures the right balance between the interests of all players – users, creators, authors, press – while putting in place proportionate obligations on online platforms," they said.

"The Directive will improve the position of creators in their negotiations with big platforms which largely benefit from their content.

"Writers, journalists, singers, musicians and actors will find it easier to negotiate better deals with their publishers or producers. 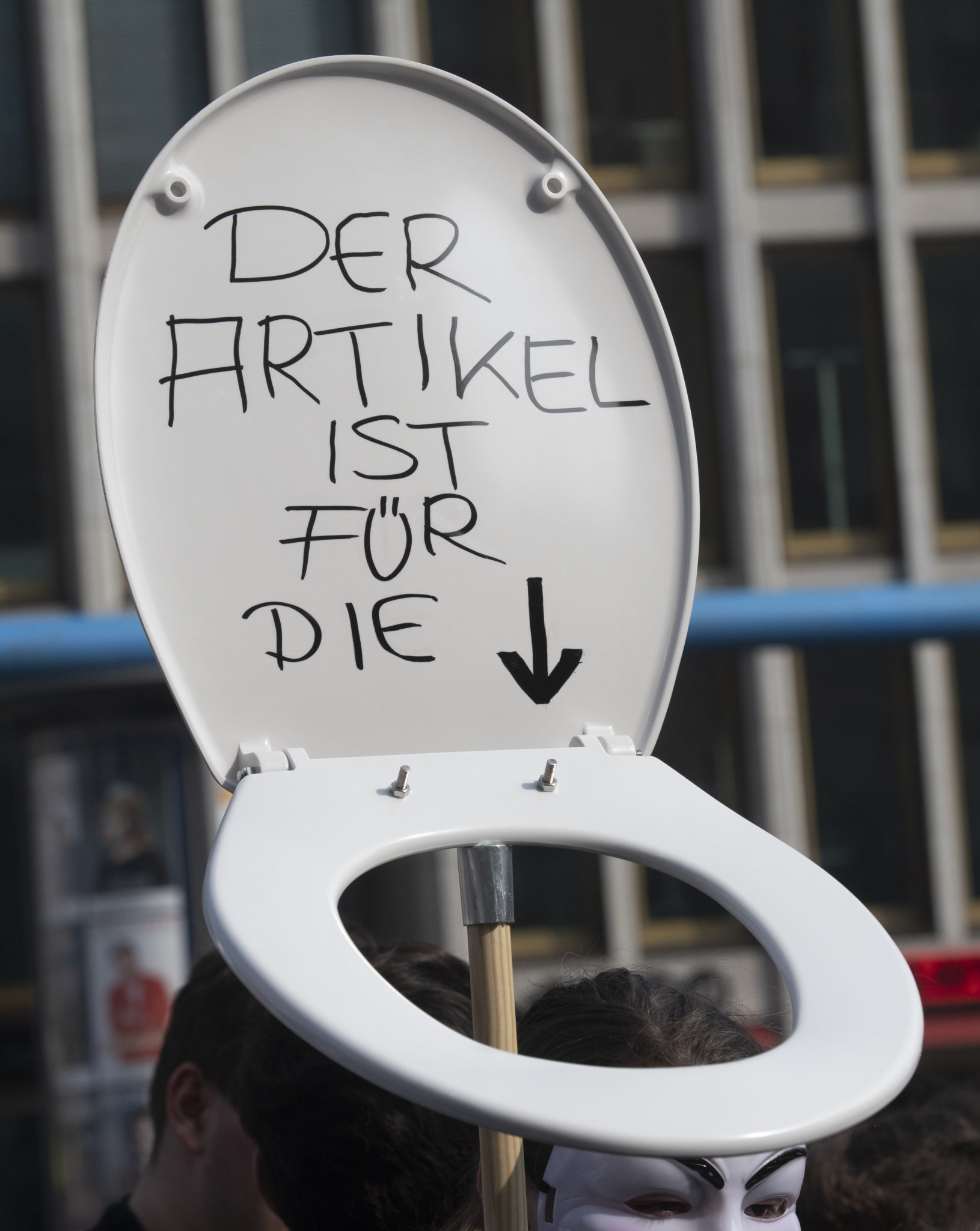 They insisted that memes and "parody creations" will be specifically excluded from the new rules - however it remains unclear how this could be enforced with a blanket filter.

They said the use of "existing works for purposes of quotation, criticism, review, caricature as well as parody" is "explicitly allowed."

"The interests of the users are also preserved through effective mechanisms to swiftly contest any unjustified removal of their content by the platforms."

The Council of European Union will now have to formally endorse the new directive - giving member states 24 months to transpose the new rules into domestic law.