ESRI warns of unequal supply of community health across Ireland

A new report has warned there is an unequal supply of community health and social care across Ire...

ESRI warns of unequal supply of community health across Ireland

A new report has warned there is an unequal supply of community health and social care across Ireland.

The ESRI says the greater Dublin commuter belt and the south east have the lowest supply of primary and community care.

The findings suggest that areas with low supply of care should be targeted to increase supply provision.

The ESRI says this could inform policies, such as Sláintecare, that aim to move care from acute hospitals to the community.

The report examined the supply of 10 key non-acute services in 2014.

The report compared supply across counties to the national average to identify areas where care supply is particularly scarce.

The commuter counties of Kildare, Meath and Wicklow had the lowest supply overall of 10 primary, community and long-term care services examined by the research. 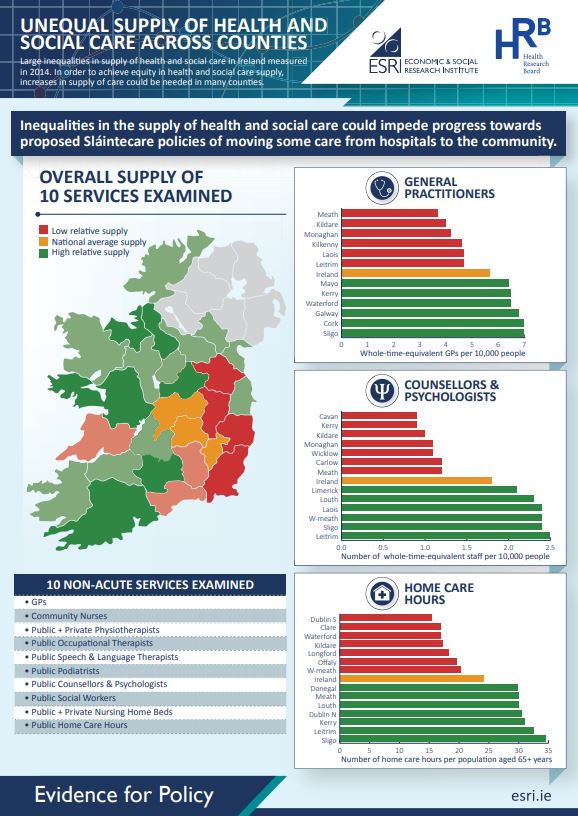 It found that in general, healthcare supply was not allocated according to population need.

"Given that Ireland has not introduced a system of resource allocation based on population need in the years since 2014, such inequalities are likely to persist", it added.

The counties with the highest number of services with supply 10% below the national average were Kildare (nine services), Meath, Wicklow, and Wexford (eight), and Kilkenny, Waterford and Clare (seven).

The ESRI said: "Generally, counties in the west and south were less likely to have lower relative supply, though this was not consistent for all services.

"Supply inequalities remained after adjusting for a broad range of need measures."

The findings suggest that without suitable resource allocation mechanisms, inequalities in healthcare supply could slow progress in implementing Sláintecare proposals - such as meeting more healthcare needs in the community, and thereby reducing pressures on acute hospitals.

ESRI research funded by @hrbireland outlines counties with the highest and lowest supply of health and social care services including GPs, community nurses and nursing home beds. Watch the video to find out more or download the report https://t.co/A0eI5I0E6M #ESRIpublications pic.twitter.com/yy891TWGpn

It also says that as the population will grow and age at d19 ferent rates across counties, policies are required to allocate supply according to need.

One of the report authors, Brendan Walsh, said: "Quantifying supply at the local level is vital to inform policymakers about those areas where greater provision of care is required.

"The findings demonstrate that in the absence of a national resource allocation system that relates supply to population need, inequalities in the supply of health and social care could impede progress towards proposed Sláintecare policies."

The research was funded by the Health Research Board.