I went to an eleventh night bonfire for the first time this week.

It was an eye opener.

There were hundreds of people out drinking and having a good time at this towering pyre, which had Irish tricolours and Palestinian flags placed on top ready to burn in East Belfast.

I was slightly paranoid, as I went along to this alone and probably stood out as I wasn’t wearing a Rangers jersey, but for the most part, the people I spoke to were friendly and it was interesting trying to understand their way of thinking.

However, what struck me was that most of these people didn’t actually seem to know why they burn these bonfires.

I was at this eleventh night bonfire in East Belfast last night. It toppled over minutes after it was set alight, luckily nobody was hurt though

Also it was not far from houses in the area, but locals say they are ok with the distance between the bonfire and houses #bonfires pic.twitter.com/5f3FYyFDH0

For anyone who heard my report on The Pat Kenny Show on Tuesday, they’ll have heard me asking a group of young men about why these bonfires where so important to them.

There was a ten second pause before they laughed and said: “I don’t really know mate, you should ask the older men, they’ve been doing this for 40 years”.

These 17 and 18-year-olds told me they were passionate about their culture – but it was just empty rhetoric because deep down, these young men have no idea what their culture actually is.

They’re burning pallets, flags, and election posters because everyone else is doing it. 'It’s tradition,' they say.

When I asked them why they burn Irish tricolours, one young teen told me: “Because those Irish bastards are trying to take away our culture.” Ironically, the same young man told me off-tape that he was going out with a young Catholic girl.

Effigy of mother of two Michelle O’Neill hung on a bonfire. Lovely celebration of culture. pic.twitter.com/bZI62GYKay

Just before midnight, three grown men climbed up the 70ft pyre and doused it in petrol. As it was set alight there were loud cheers. One drunk man behind me roaring: “F**k The Pope”.

I really wanted to stick my microphone in his face and ask him why he was shouting that, but I assumed he wouldn’t take too kindly to being challenged.

As the bonfire went up flames, everyone was told to stand back. Within minutes, the pyre toppled. It was only a couple of hundred yards away from a large housing estate.

My first thought was, how are there not more people seriously hurt on the eleventh night every year?

Hundreds of people, young and old, drunk out of their heads, standing around 70/80ft bonfires that are set alight and eventually topple over. It doesn’t take a genius to work out this is a recipe for disaster.

Yet these bonfires keep happening every year on July 11th – and they keep getting bigger.

Every year election posters and flags will be burnt and we’ll see signs like “kill all taigs.”

Every year, we see the condemnation – but you can be sure the same thing will happen next year. 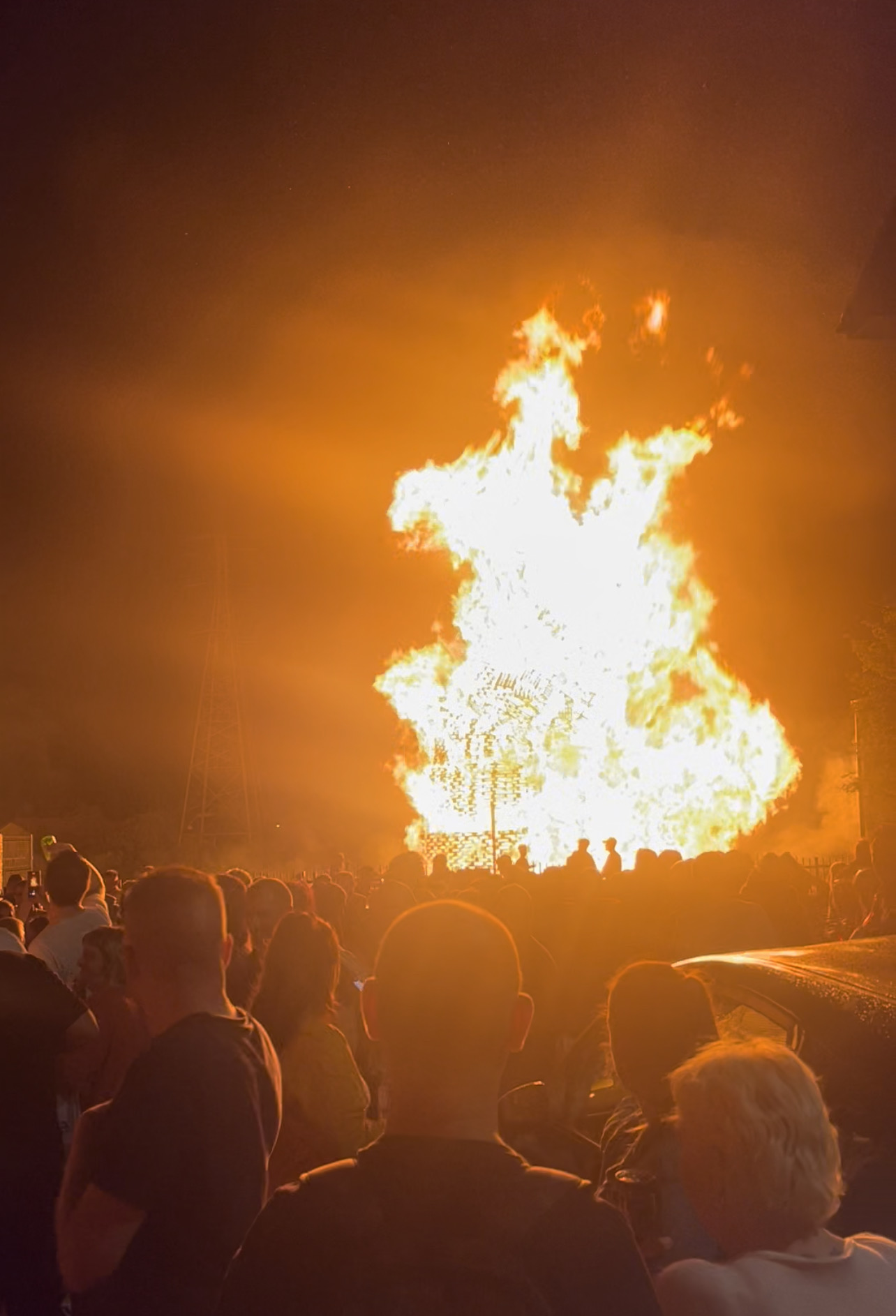 Maybe it’s time to stop condemning and just ban these bonfires once and for all.

This wouldn’t be tolerated anywhere else. Not here, not in England, not in Scotland and not in Wales.

Rob, a South Carolina tourist I spoke to as he watched the Sandy Row bonfire in Belfast from afar, probably described it best.

“It reminds me of the Ku Klux Klan burning crosses in the United States in the 50s and 60s,” he said.

These bonfires are not culture; they’re a hate fest.