A Dublin couple is encouraging others to seek fertility treatment here in Ireland. Clare and Barr...

A Dublin couple is encouraging others to seek fertility treatment here in Ireland.

Clare and Barry went through IVF fertility treatment in Prague for a number of years, before finding a solution much closer to home.

Clare told Lunchtime Live they were told they had only a 5% chance to conceive naturally.

"Back in 2016 we had a number of months of just trying ourselves with no avail, so we tried then just to go for initial tests."

"They discovered that I had an autoimmune hyperparathyroidism - so it just took a couple of months to rectify that."

But in the process of other tests, it was revealed that there was a problem with Barry's sperm concentration and morphology.

"So we were given about a 5% chance of conceiving naturally, and that was very hard to take obviously", she said.

It recommended they look at a sperm donor, which said described as "a real kick in the teeth".

"We always said we always wanted kids no matter what way they came to us", she added.

Intracytoplasmic sperm injection (ICSI) was then recommended as the IVF option for them.

Barry said: "You never think of these things - you always assume that there won't be a problem."

"To get told 'We don't recommend using your sperm, we recommend donor sperm' before anything was even attempted in terms of trying to boost or trying to help my sperm.

"Just basically getting told 'We don't recommend using your sperm, we recommend donor sperm' - that was very, very hard."

The couple then decided to seek the advice of their GP, who put Barry on supplements and told him to lose some weight.

"I went and I did it all, got tested - it improved, but not enough".

But Barry said they did not accept it: "It they were giving us a 5% chance conceiving naturally, then there has to be a better chance in terms of conceiving with my sperm via IVF". 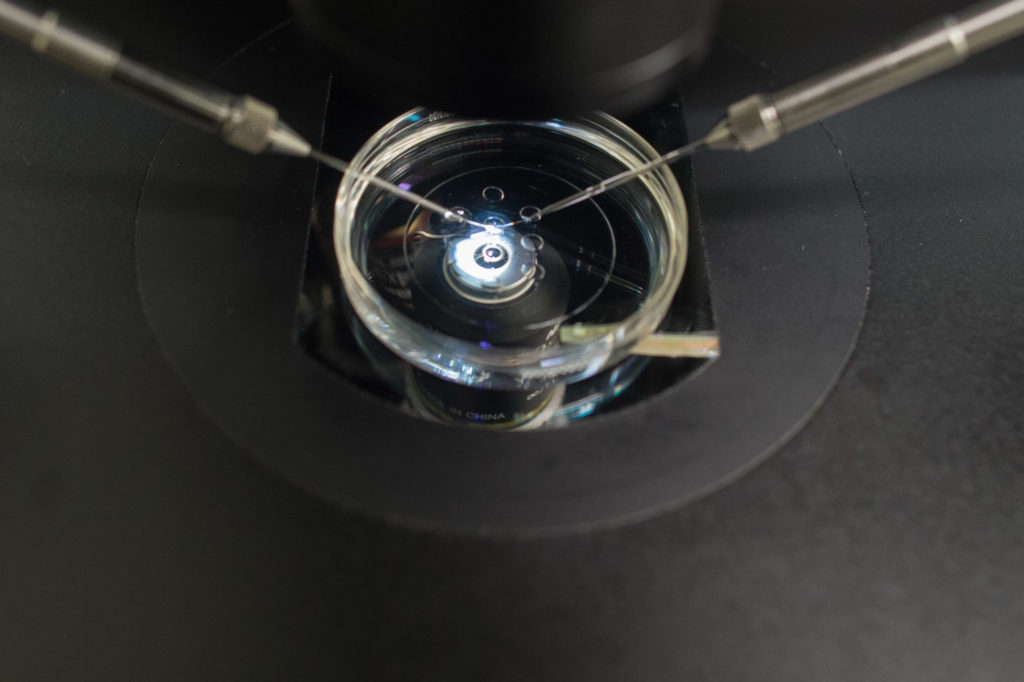 Two micro manipulators conducting an intracytoplasmic sperm injection (Icsi) in a dish at the fertility centre in Magdeburg, Germany, 17 January 2018. During the treatment, an egg cell is injected with sperm. Photo: Klaus-Dietmar Gabbert/dpa-Zentralbild/dpa

They started getting "second and third opinions" at the end of 2016 - and ended up settling on Prague.

Clare explained: "I was more sold on it initially than Barry was, just from logistics to the unfamiliar territory of going abroad and not knowing where you're going, what the clinic's like, the language barrier and such".

She admitted it "took a little bit of coaxing, definitely, on my part".

However, once they signed up for treatment they discovered they faced lots of challenges.

"We were the unlucky couple that, unfortunately, this carried on over such a long period of time - we're talking two and a half years of this."

Barry said the hardest part was actually after each cycle.

"Money is money - it's what it took out of us personally is what we found the hardest.

"After every single one we were exhausted - not just in terms of physically exhausted, mentally and emotionally also".

"The whole process for every collection, every transfer was last minute flights... thankfully we're both in jobs where they understood the circumstances and were very accommodating".

"And most of the time they wouldn't let us do it here, we had to fly over there to get it done".

But then they decided to give their dreams of starting a family one last go at a clinic in Ireland.

This time last year they attended the Waterstone Clinic for one round of treatment.

Clare explained: "When we went to Waterstones then in January it was really kind of just down for an initial consultation".

"Just from the very beginning it was just really what we had all the time sought for... to be told the reality of things and not to be leading us down some kind of path that wasn't really honest at all".

"We're currently six months pregnant - sorry, we should have mentioned that at the beginning",

"We're delighted, we were very lucky with our collection that we did back in June, I think, and we managed ot collect 11 embryos this time.

"So we have a whole football team nearly of embryos".

"We had met back in January with Dr Waterstone and his colleagues, and then with COVID - the uncertainty of COVID and the effects on the unborn child and the mother - all treatments were halted.

"But we were able to proceed then in June with the collection, and we had to wait then just to let my system calm itself and go for a transfer in August.

"So it was the very first transfer, and we were just so elated and still are".

Main image: A monitor showing a intracytoplasmic sperm injection (ICSI) at the fertility centre in Germany in 2018. Picture by: Klaus-Dietmar Gabbert/DPA/PA Images