The event coincides with the Feast of St Francis of Assisi

One Dublin church has held a special blessing ceremony for dogs and other pets.

The event at St Anne's Church in Portmarnock coincides with the Feast of St Francis of Assisi - the patron saint of animals and the environment.

Henry McKean was there for Moncrieff and spoke to some of those involved.

Parishioner Pauline Geoghegan said this felt like the right time to do it.

"Since lockdown, everyone has dogs, so it's an inclusive blessing for people who really aren't into church or anything but they like to look after their animals," she said.

"It's not just dogs: If they have rabbits, hamsters, turtles ... we hope there'll be a whole array of animals to be blessed and that there'll be real excitement here". 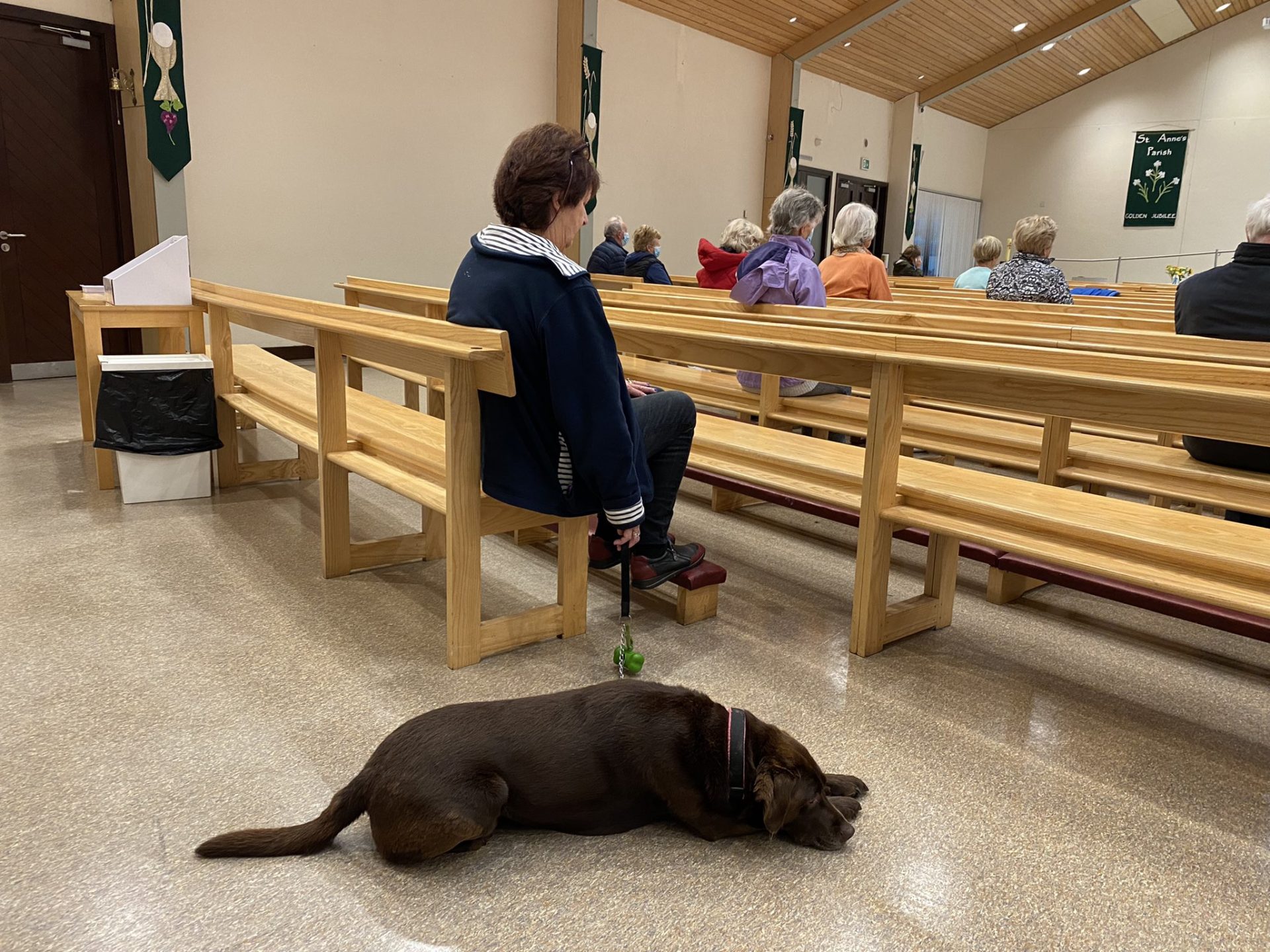 A dog inside St Anne's Church in Portmarnock, Dublin. Picture by: Henry McKean/Newstalk

During the ceremony, pets who have passed on were also remembered.

"Just for a moment, we pause and remember all those who have lost their pets," said Fr John Flaherty. "Lord, we pause and give thanks to the memories of those pets we have lost."

"We pray for their owners who continue to mourn the loss of their pets, but most of all, we give thanks for their memories and for the ways in which our pet enriched our lives." 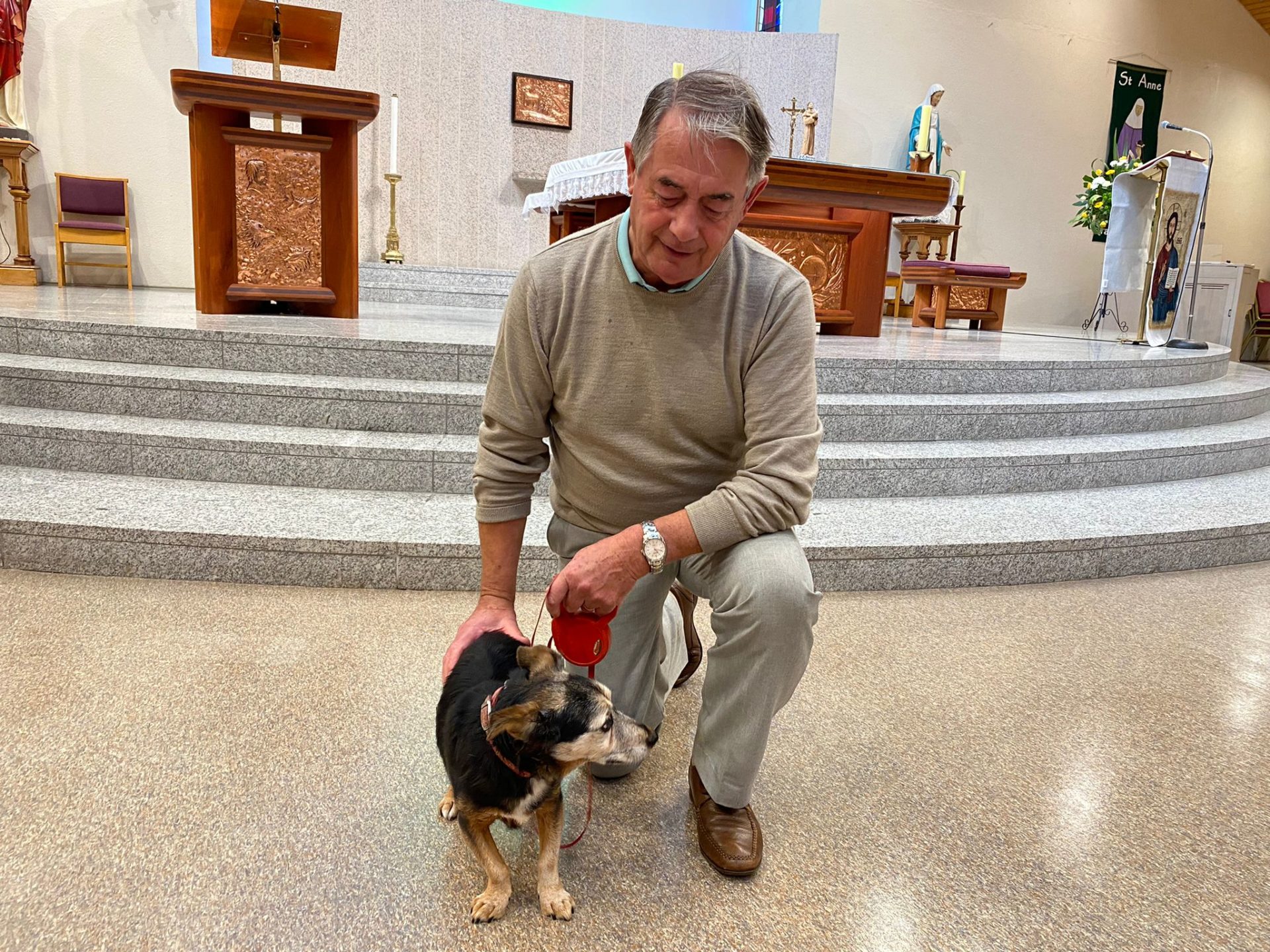 Each pet was then blessed by name.

Among those attending was Trish Moore with chocolate labrador Marlow, who belongs to her daughter Aisling.

"She's very quiet, she loves people and she's not so friendly with other dogs," she said. "She prefers people to dogs."

"She shies away from other dogs, so I wasn't really worried about her going mad with the dogs."

Asked why she was getting blessed today, she said: "She's Aisling's dog; she's her life really, she loves her.

"She has a weak stomach, she has pancreatitis, she flares up... [so it's] just to bless her and keep her safe for Aisling."

Todays is the feast day of #StFrancisofAssisi join us for an animal blessing at St Anne’s Church Portmarnock. @SeanMoncrieff @NewstalkFM from 2pm pic.twitter.com/dodOo7nfdF

"My daughter got him for her 21st and then about a year later she moved out with the boyfriend and she left us - so he's become our dog," she said.

But Roisin said her daughter still comes to visit him.

"We absolutely love him and he's a very good dog," she said. "He brings great joy into the house, especially when we never had a dog before.

"We had four children and they've all left home and my husband brings him for a walk every day. He has great joy in that as well."

“Any sort of prayer is very powerful.” Todays is the feast day of #StFrancisofAssisi join us for an animal blessing at St Anne’s Church Portmarnock. @SeanMoncrieff @NewstalkFM from 2pm pic.twitter.com/VFw3yg1pdg

Roisin said she believes there is "great power in blessings and prayer".

"This is the first time we've had this in the parish and we were all very emotional this morning I think," she said.

"All the dogs were so quiet, I think the priest is very special himself."