Finance Minister Paschal Donohoe has announced a budget with extra spending of almost €3bn. It ...

It includes an increase in the carbon tax which will see petrol and diesel get more expensive at midnight.

However other fuel increases will be delayed until May 2020.

The announced increase is expected to add approximately 2c to a litre of petrol or diesel - equivalent to an increase of around €36 a year in fuel costs.

Mr Donohoe said: "Instead of a larger increase in any one year, I am committing to a €6 increase as a first step towards the 2030 target.

"It is this Government’s intention, and my ambition, to increase this steadily to meet the 2030 target.

"This increase will apply from midnight tonight to auto fuels but its application to other fuels will be delayed until May 2020, after the winter heating season."

He said this measure will raise €90m in 2020 - all of which will be ring-fenced to fund new climate action measures.

A packet of cigarettes will also increase by 50c from midnight.

There is also a package of €1.2bn to help agriculture, businesses and tourism if there is a no-deal Brexit.

Some €365m will also be provided for extra social protection expenditure - with €45m made available to assist people to transfer to new work in a no-deal scenario.

On this, he said: "If a no-deal happens, we will intervene to further protect our economy.

"This intervention will be based on the following principles. This funding is available to manage a no-deal Brexit.

"It will be borrowed money. If we do not need it, we will not borrow it."

"If no-deal does not happen, it will not be borrowed for other purposes."

"A no-deal is unpredictable and different sectors could be impacted in different ways."

"In the event of no-deal, €650m will be made available to support the agriculture, enterprise and tourism sectors and to assist the most affected citizens and regions.

"Of this, €220m will be deployed immediately in the event of a no-deal.

"From this, €110m for enterprises has been identified for the first wave of funding for targeted new interventions to help vulnerable but viable firms adjust to a no-deal Brexit."

He added: "These interventions will support firms of all sizes at all levels of difficulty with a particular focus on sectors most exposed, including food, manufacturing and internationally traded services." 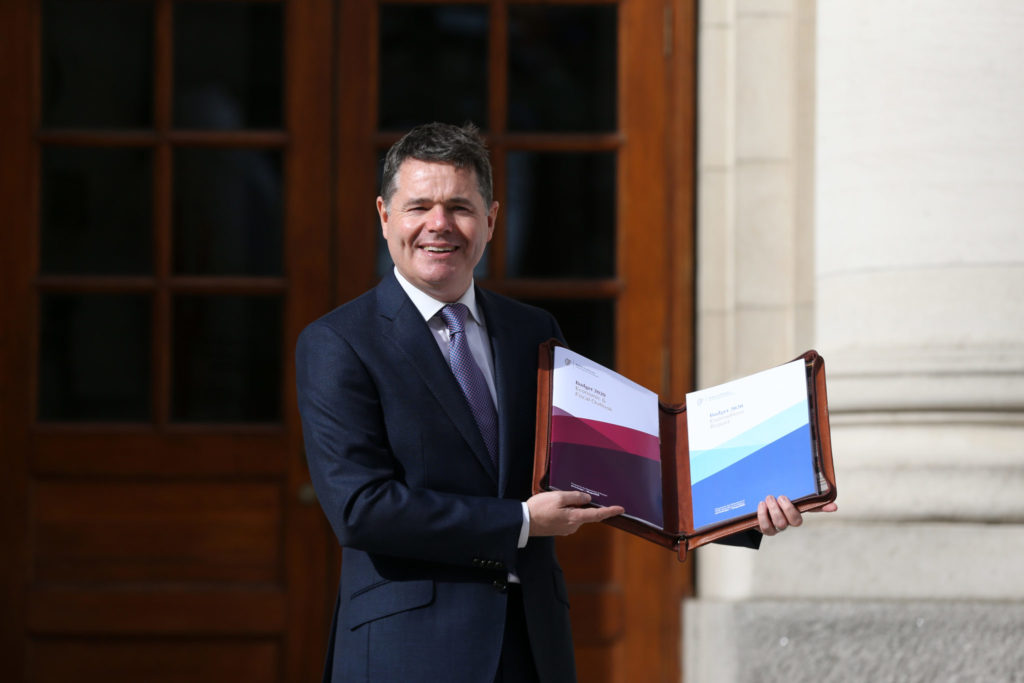 Support will be by way of grants, loans and equity investment and will include:

Some €110m will be provided through the Department of Agriculture in the event of a no-deal Brexit.

Mr Donohoe said: "The provision of immediate supports for our beef sector will be a first priority, as will support for our fishing fleet."

There will also be an investment if €2bn in rural Ireland next year - including €51m more for the Department of Agriculture.

The allocation for Túsla, the Child and Family Agency, will increase by more than €29m, to just over €814m.

This will support the continued reduction in the number of children for a social worker; and address cost pressures in private residential and foster care.

Funding for early learning and childcare will also increase by €54m.

This will support the continued provision of two years of the Early Childhood Care and Education (ECCE) scheme for all children.

Meanwhile the budget of An Garda Síochána will increase by €81m next year.

This will see up to 700 new Garda recruits on the streets.

An additional €39m in current expenditure will be given to the broader justice sector - an increase of approximately 4.8%.

This will fund increasing costs in direct provision and greater levels of activity in both the Courts and Prison Service.

While Mr Donohoe said the country's corporation tax rate "has served us well and will not be changing".

Stamp duty on commercial properties is to go up 1.5% tonight - while the help-to-buy scheme in housing is being retained until 2021.

Meanwhile 100% of the Christmas bonus is being kept - and the Living Alone allowance is to increase by €5 in 2020.

While one million additional home care hours will be provided next year, to support older people to be cared for in their own homes instead of hospital or residential care.

And in an unexpected move, the civil service is to examine the location of its offices - and where they could move out of Dublin.

Minister Donohoe said this was to ensure a "balanced regional development".

Get all the reaction here

Brexit extension to have positive impact on Irish economy - Donohoe

Evening top 5: EU 'not in position' for Brexit deal; Turkey strike on Syria; and Rooney-Vardy feud