The commission received 1,811 individual queries - compared to 1,732 the previous year

Issues around disability discrimination were the highest area of public contact to the Irish Human Rights and Equality Commission last year.

In its annual report, the IHREC says disability discrimination represented 46% of contacts related to services and 36% related to employment.

The majority of concerns related to the Equal Status Acts, and focused on discrimination on the grounds of disability (46%), housing assistance (16%) and race (13%).

The top concerns under the Employment Equality Acts were discrimination on the grounds of disability (34%), gender (25%) and race (14%). 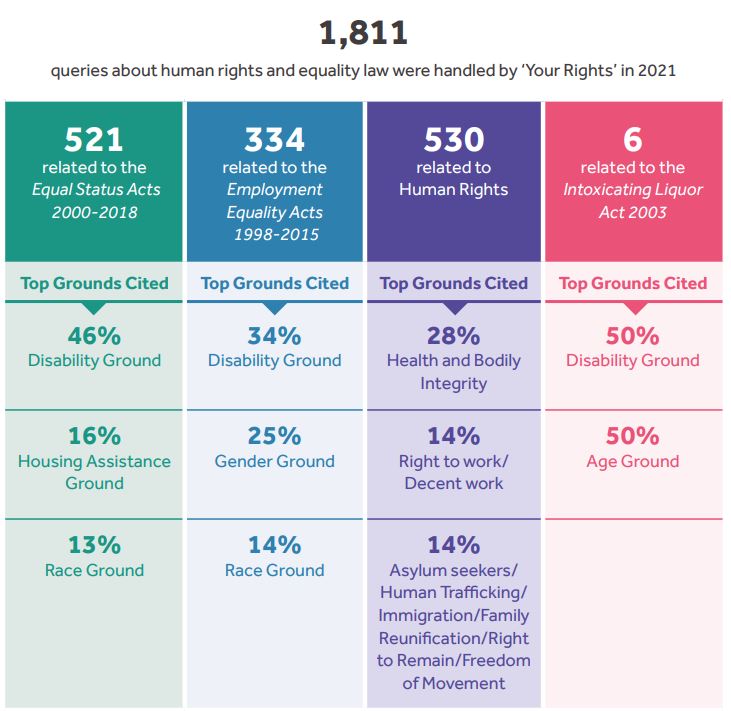 And the top three public concerns in relation to human rights were on health and bodily integrity (28%), right to work and decent work (14%), and asylum seekers/human trafficking/immigration  and others (14%).

The commission received 1,811 individual queries - compared to 1,732 in the previous year.

It also contributed in the courts to Mary Harney and Philomena Lee's successful challenge of the final report of the Mother and Baby Homes Commission of Investigation.

Chief Commissioner of the IHREC, Sinéad Gibney, says the pandemic has seen some issues rise again.

"As we emerge from the pandemic, the problems it partially masked rise again.

"These include the well-established issues of homelessness and housing provision, of gender-based violence, structural issues of care, historic wrongs, the rights of persons with disabilities, and how those coming here to seek asylum and refuge are treated."

The Commission also increased its headcount by 10 people, to a total of 72.