By Susan Cahill, Newstalk.com On Wednesday the 8th of May South Africa will have its sixth gener...

On Wednesday the 8th of May South Africa will have its sixth general election since the end of the apartheid system in 1994.

President Cyril Ramaphosa has spoken out against the vicious cycle of poverty in South Africa and has called for a ‘radical economic transformation’ of the country building a more inclusive and collective economy for all.

‘This is a survivalist place’ says Mzwakhe Khumalo from Sonke Gender Justice.  ‘People are right to be afraid. Violent crime is a part of everyday life. It affects everyone’ he explains.

‘There is no respect for the law’ says Thabiso a 43-year-old security guard from Limpopo, from South Africa’s Northern Province. ‘I came with my wife and 3 children for work. There was nothing for my family in Limpopo’ he says.

‘The local police are not visible. They are not doing their job. They are not protecting us. Diepsloot is a dangerous place to live in’ he added.

‘I think the social problems in Diepsloot are getting worse’ explains local resident Nhlanhla, a 23-year-old shop keeper who was born in Diepsloot.

‘Even the taxi drivers won’t come into the township anymore. We have been left behind’ he says. 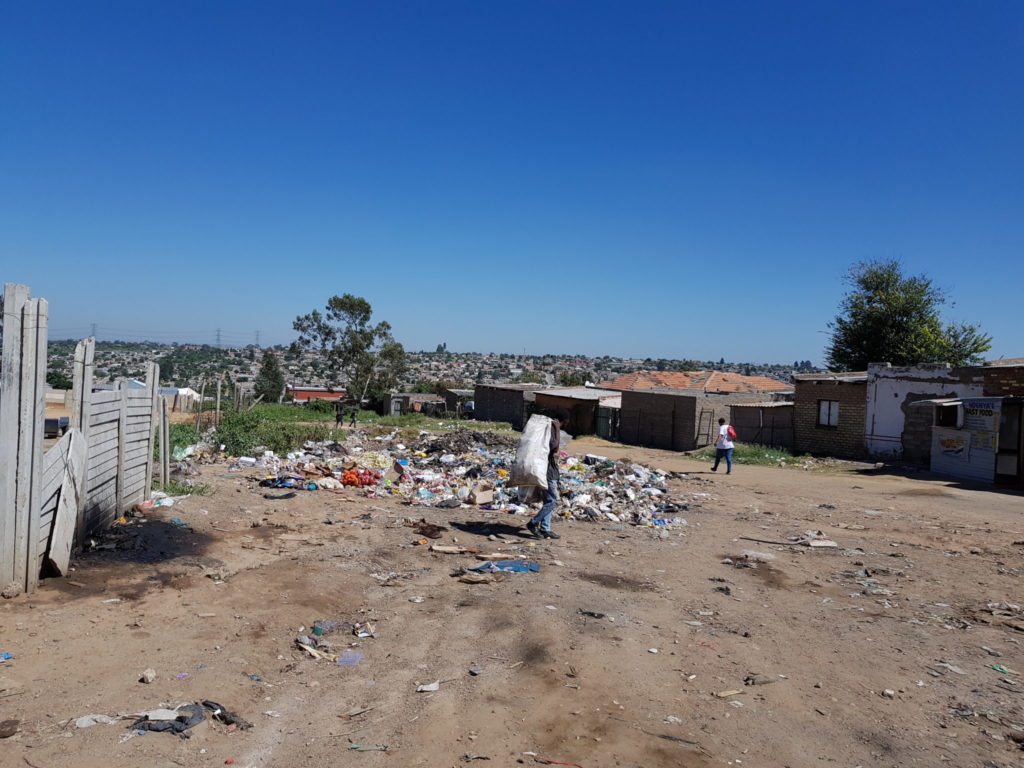 Diepsloot is one of South Africa’s most densely populated townships.  Stretching over 5 square miles, the township was established in 1994 as a transit zone for migrant workers from Southern Africa while also providing a relocation area for marginalised populations moved from shackland settlements within the city Johannesburg. Most of township’s inhabitants live in 3 m by 3 m shacks made from scrap metal, wood and plastic.

According to Professor Philip Harrison, Chair in Spatial Analysis and City Planning at the University of the Witwatersrand ‘The city of Johannesburg is one of the most divided and unequal cities in the world. We have some serious sustainability problems. Transportation is a problem for us. Water is a critical challenge for our city and for our success. 90% of our electricity comes from coal. Our carbon emissions are beyond our status as a middle-income country’.

‘The most fundamental issue confronting our city and its future is job creation’ he says.

‘We have serious problems with air pollution in our urban areas. Coal burning and transport emissions are the principal sources of air pollution in the city. While were not as bad as Lagos in Nigeria many residents along the mining belt are affected by contaminated acid water and are exposed to toxic dust and the chemicals from the mines’ he says

‘We need to respond to the pollution sources and reduce our overall emissions’ says Professor Harrison. 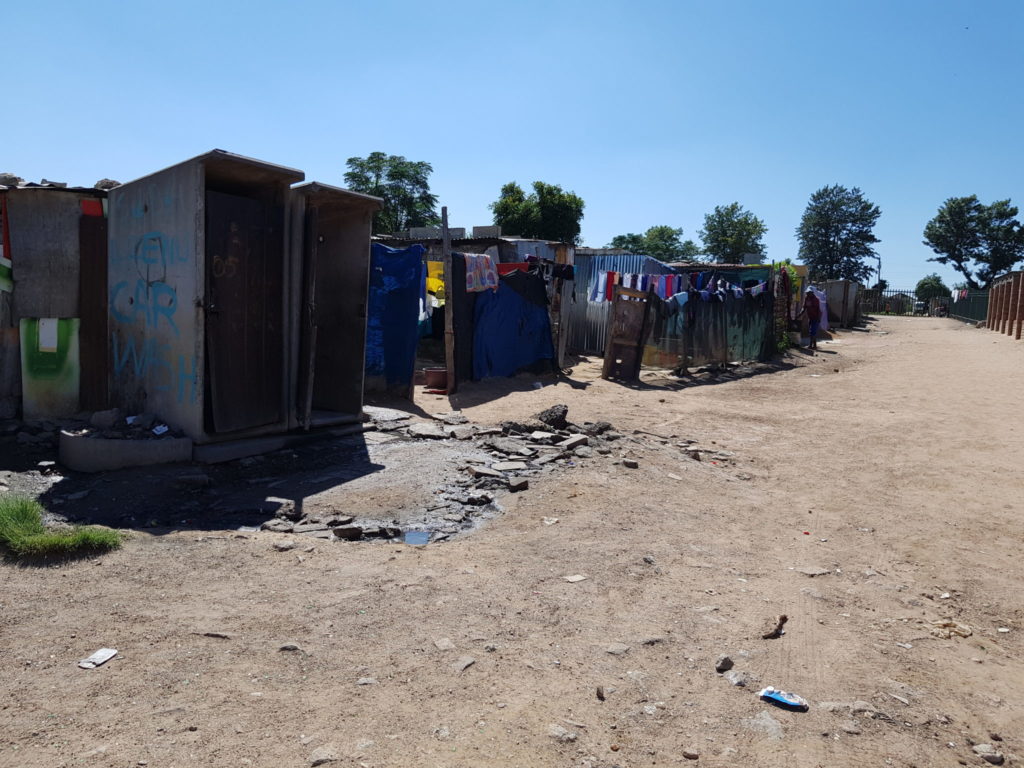 Over the past 20 years the population of Diepsloot has mushroomed from 138,000 to over 400,000. While unofficial figures estimate the population to be closer to 500,000 putting an enormous strain on the existing urban infrastructure and services in the township.

‘I use bucket toilets’ explains Angel a 26-year-old mother of 3 children. During the summer months the smell is sometimes unbearable. The tap water is safe but it’s not always available. There is never enough water. Sometimes I can only get 20 litres for my entire family. We have power outages that can last for 2 or 3 days. Not all the township has electricity. In Extension 4, life is much better. They have street lightening, water and better roads’ she says.

While the city of Johannesburg provides temporary public toilets for the residents of Diepsloot most young women don’t feel safe using them.

The toilets are never clean explains Amahle, a 19-year-old resident from Extension 1. There are flies everywhere. The stench is awful’ she says.

‘We have no street lightening’ says Elizabeth. ‘It’s not safe to walk around after dark. I only walk around at night if I really have too.  I don’t use the taxi buses at night. I usually try to get home before dark. Sometimes it’s not possible to leave work early’ she says. 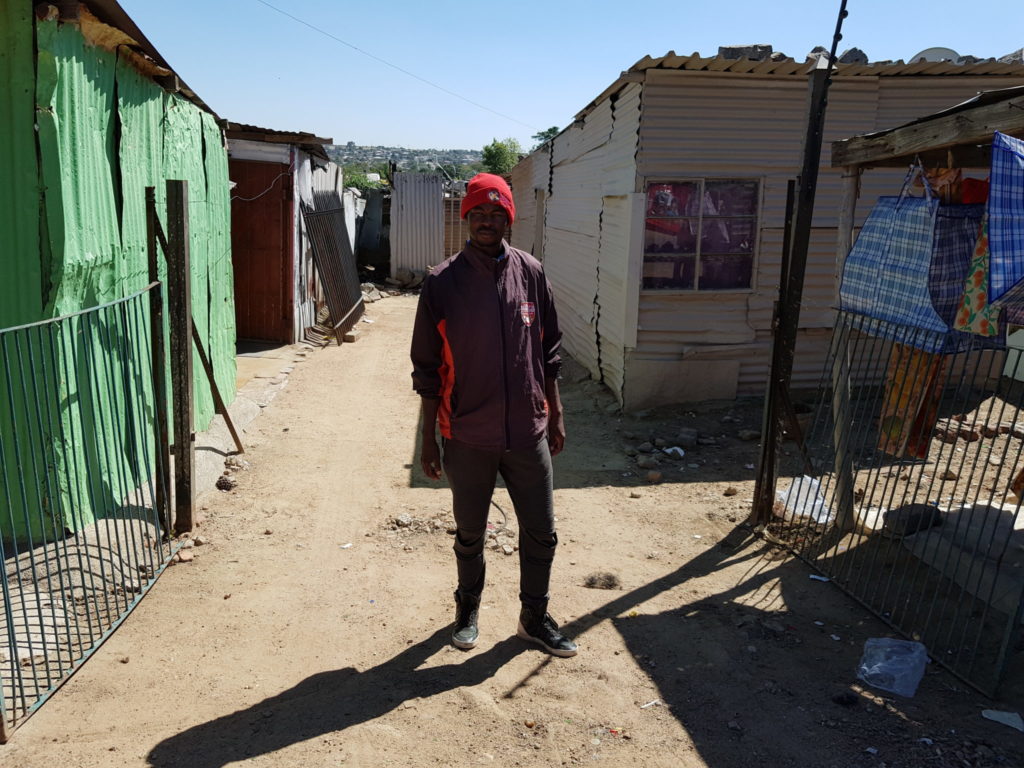 I take a left off the main road and walk down Bird Street a dusty dirty track off Extension 1 with Freddy Moagi a local community mobilization worker from Sonke Gender Justice.  There is music pumping from a local Shebeen, a small tightly packed chicken coop and piles of plastic bags, tyres and bottles stacked up on the street. At the corner of the road I see a local rubbish picker hauling a huge bag full of bottles, cans and all sorts of containers.

‘Trash is money’ says Freddy. ‘Recycling is a vital source of income for the poor of Diepsloot’ he explains.

‘Trucks come into Diepsloot from construction projects from around the city and dump their rubble adding to the township’s existing environmental problems’ explains local resident Melokuhle.

‘The scale of illegal dumping is frightening. We have sewage from burst pipes mixed with rubble and domestic waste polluting the township’ says Melokuhle.

Pikitup, the official waste management service provider to the City of Johannesburg has a recycling depot in Diepsloot.

‘Currently 97% of the city’s waste is going into four landfill sites. We have put in large skips across the township for residents to put their rubbish in but many people in Diepsloot are not environmentally aware. It’s mainly in the middle income and high-income suburbs of Johannesburg that you find residents recycling and managing their waste’ he added.

‘We should view waste as valuable. There is a value in recycling, and we need to look at strategies to turn waste into electricity or compost. There will be off springs, other businesses that will be created by recycling. We are trying to formalise waste picking in Diepsloot to assist residents in seizing the opportunities with waste’ says Pikitup Spokesperson Muzi Mkhwanazi.

I walk up to Mpshane, a 32-year-old mother of 2 young children outside her tiny corrugated iron shack on the corner of Extension 1. I ask her about the children playing nearby on a pile of rubbish.

‘I used to worry about all the rubbish but now all I can think about is having enough money to put food in my children’s belly’ she says.

‘When you are hunger you don’t worry about the pollution. That’s the least of your problems’ explains Mpshane.

According to a recent study by Sonke Gender Justice, one of South Africa’s most prominent gender rights organizations more than 56% of men in Diepsloot have raped or beaten a woman in the past 12 months.

The Sonke Change Trial, a three-year research partnership between the School of Public Health at the University of Witswaterrand and Sonke Gender Justice supported through Irish Aid investigated gender attitudes, sexual violence and intimate partner violence on the township.

‘There is a culture of violence in Diepsloot. We have a big problem with patriarchy’ says Freddy Moagi from Sonke Gender Justice.

‘We try and educate our men to be a better partner, husband and father to their kids’ says Freddy.

‘We need to teach our men to have respect for women and end the high levels of violence against women in South Africa’ he added. 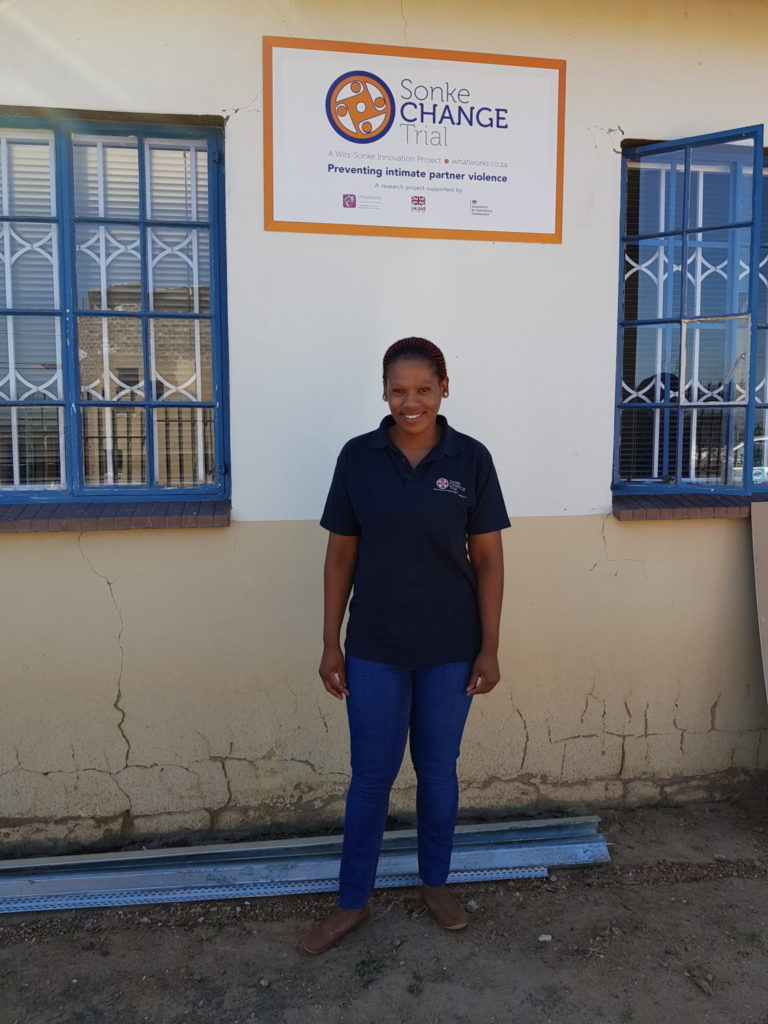 ‘Diepsloot is a very harsh place to live in especially for children’ says Jermina Nkoana, a community worker with Sonke Gender Justice.

‘There is no place for the children to play. We don’t have proper drains, there is water running everywhere and burst pipes. The children are playing in mud and dirt’

‘We have lots of problems with depression, anxiety and mental health in our community. Most people who have HIV keep it to themselves. And then there is the problem with alcohol and drugs in Diepsloot’ says Jermina.

This only adds to the existing social challenges’ she says.

‘There are only two health clinics in Diepsloot. You have to queue from early in the morning to see a healthcare specialist and there are only very basic services provided’ says Jermina.

‘If you arrive at 11am you will not be able to see a doctor, the clinic will be full’ she added.

The Effects of Urbanization on Education

While the government of South Africa has invested heavily in primary education in the country many children on townships in South Africa are getting lost in the system.

‘The social problems start at 3 or 4 years of age’ says Aldon Karshagen, Managing Director of the Diepsloot Foundation at St Mungos United Church in Diepsloot.

‘The children are exposed to their parent’s poverty’ he added. 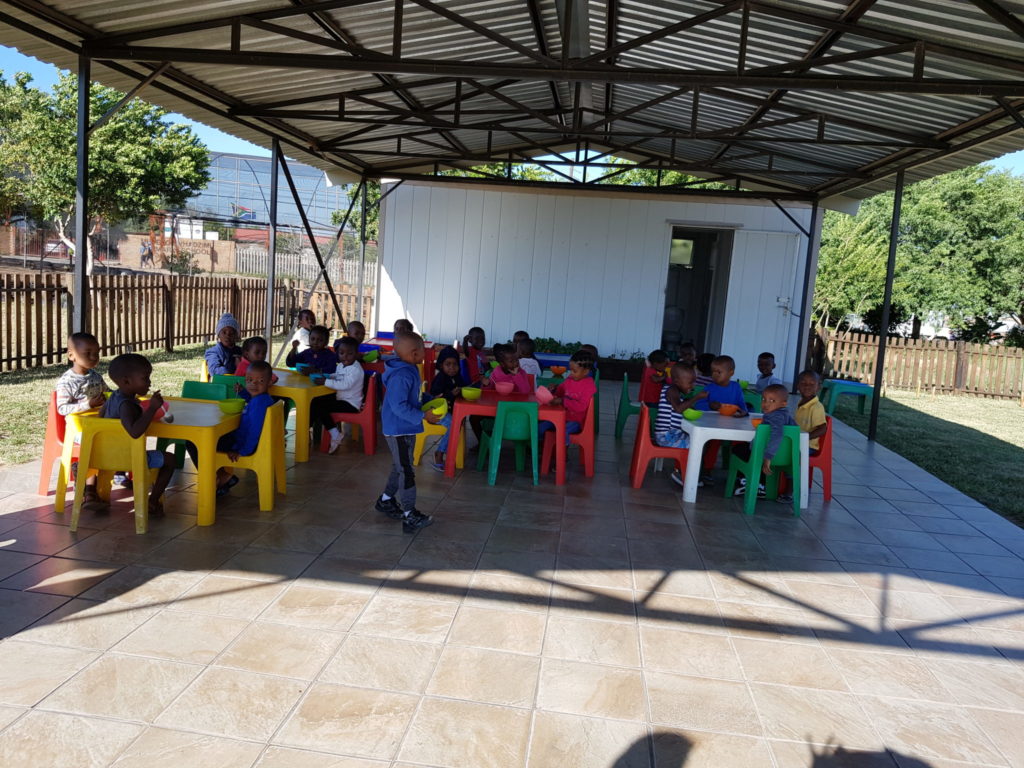 ‘Diepsloot takes you back to a dark space in Africa. There are limited services throughout the community. It’s a survivalist community. I need to survive today so I can get through to tomorrow’ says Aldon

‘Diepsloot is very different to Sandton, here you have a first world country alongside a third world environment’ he added.

‘The biggest problem facing Diepsloot is unemployment. There are limited work opportunities. When you are born into poverty it’s next to impossible to make it out’ says Aldon.

‘How do you start a business if you don’t have money’ he added.

The Diepsloot Foundation is providing adult education and skills training in Diepsloot with classes in carpentry, computers, up cycling and sewing.

‘We teach a variety of skills. I think up cycling may be the answer to our waste problems here in Diepsloot’ says Aldon.

Urbanisation, Unemployment and Migration in Diepsloot

‘The population is growing all the time. There is so much competition for work’ says John a local resident from Extension 12.

‘Every day there are hundreds of people coming in from the rural areas in search of employment.  South Africa attracts lots of migrant workers coming in from Malawi, Zimbabwe and Mozambique. It’s not easy to get a job. The foreign workers will work for less money’ he added.

The future for Diepsloot

Diepsloot stands in stark contrast to the wealthy suburbs of nearby Sandton, Dainfern and Fourways. In these mainly white affluent suburbs, gated communities live in large expensive houses surrounded by beautifully landscaped gardens. They are patrolled and cleaned by black South Africans.

‘Even if we get politicians coming into Diepsloot, the core of the place still remains. Diepsloot gets a lot of civil society sympathy. There are a lot of things happening but they never get completed. Corruption is a problem in South Africa and it’s taking away from the poor. We need government to take development to the people’ says Mzwakhe Khumalo from Sonke Gender Justice.

‘I think the challenges are the answers too. Integration is extremely difficult. We need an integrated approach. Unfortunately, the pace of social and political change is not happening at a level that will change the landscape of South Africa. If you come back in ten years you are not going to see a very different Diepsloot. We might have more electricity and running water but the social problems in Diepsloot will still be the same’ says Aldon Karshagen. 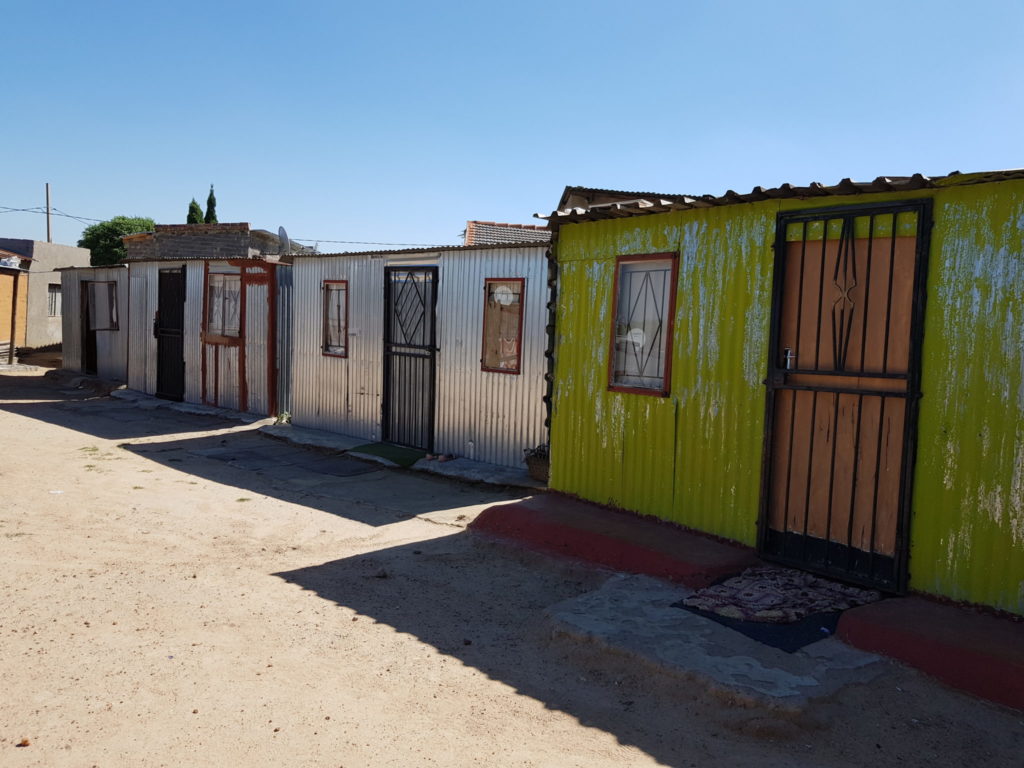 Susan Cahill’s journalism trip to Johannesburg in South Africa was supported by Irish Aid and the Simon Cumbers Media Fund. ‘The Right to a City’ radio documentary will be broadcast on the 'Documentary and Drama on Newstalk' in June 2019.