Met Éireann could issue further weather warnings ahead of the arrival of Storm Jorge this weeken...

Met Éireann could issue further weather warnings ahead of the arrival of Storm Jorge this weekend.

An orange wind warning has been issued for seven counties along the west coast from Saturday morning, with gusts of up to 130 kilometres an hour.

A status orange wind warning is being forecast for Galway, Mayo, Clare, Kerry, Donegal, Leitrim and Sligo from 6.00am on Saturday into Sunday morning.

And a status yellow rainfall warning will be in place for Munster, Connacht and Donegal from midnight on Friday.

While a status yellow will also be in place for Leinster, Cavan, Monaghan, Roscommon, Cork, Limerick, Tipperary and Waterford from 9.00am on Saturday morning.

Storm Jorge, as named by the Spanish state meteorological agency Aemet, is set to make landfall on Saturday.

The National Emergency Coordination Group will meet on Friday to discuss the potential impact of Storm Jorge, which follows several weeks of very wet weather.

Heavy rain has already led to flooding in parts of the country.

Weather warnings are in force, keep up to date with the forecast

The Defence Forces have been on standby to provide more help in flooded areas.

It is the first time the forces have been called in to assist since the recent spell of wet weather began.

A number of roads across the country were flooded earlier with the west the worst affected.

Roads in parts of Galway, Roscommon and Sligo were also closed as a result.

The AA is advising motorists to never drive through floodwater unless you are sure it is not too deep for your car.

Here in Castleconnell in Co. Limerick these kind homeowners let me film the flood threat in their garden. Where there’s usually a wall and a road, now all they can see is water 🙏 #flooding #Shannon pic.twitter.com/DFDxYD05rY

More heavy rain is forecast for Friday and Commandant James O'Hara told Newstalk earlier the Defence Forces have already provided assistance in the midlands and southwest.

“Our personnel have deployed in two primary regions. The first one was in County Limerick near Castleconnell and the second one in the Carnakilla area of County Westmeath,” he said. 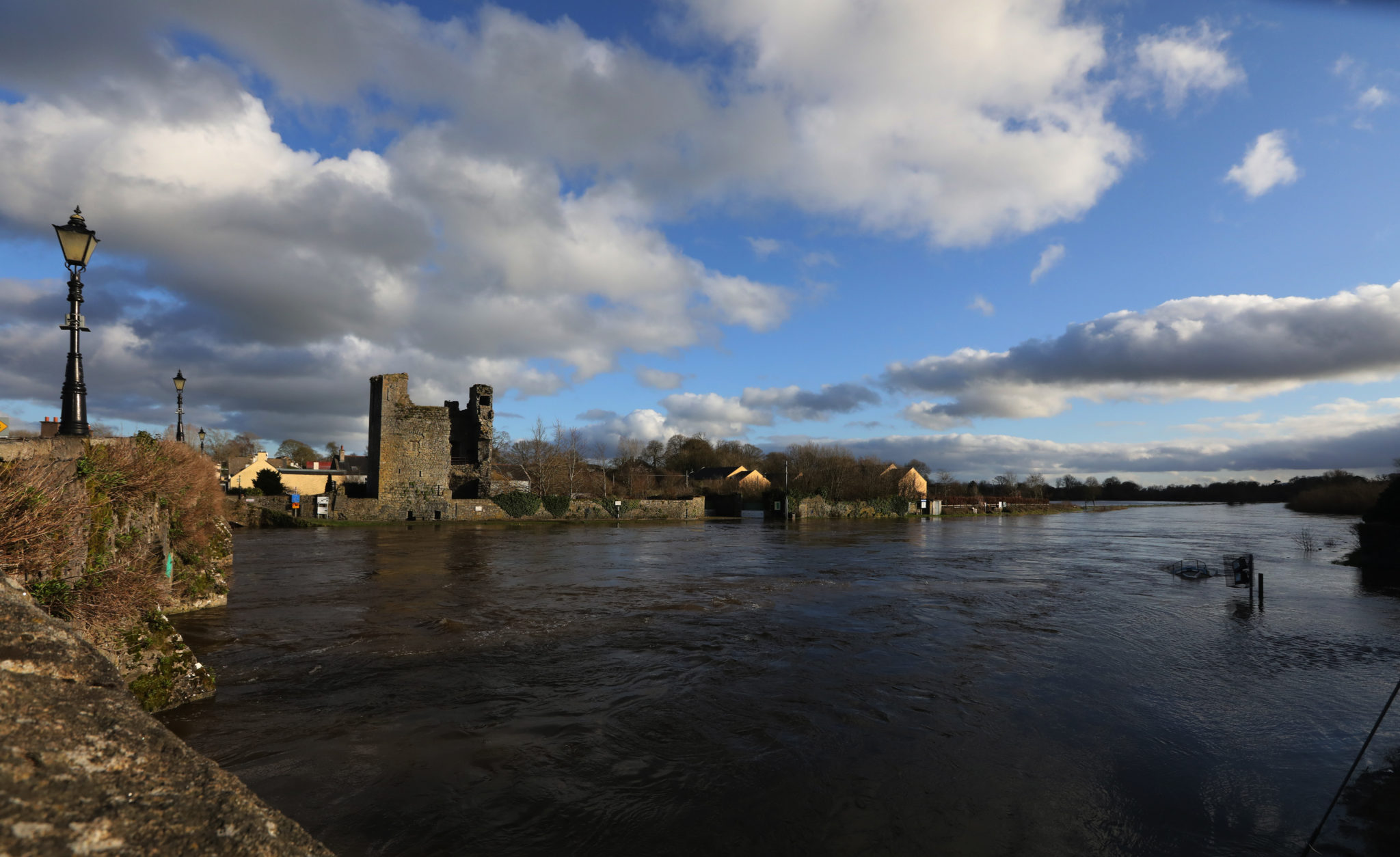 The River Barrow in flood as it flows through the village of Leghlinbridge in County Carlow, 24-02-2020. Image: Eamonn Farrell/RollingNews

He said they are ready to help out wherever they are needed.

“We will be on standby to respond to any request we receive from local authorities,” he said.

“In comparison with the last occasion when the Defence Forces were requested, the flooding does not appear as extensive on the whole.

“However, I am sure, on the local level, it is all relative so to the local residents that are affected by flooding, and it is every bit as serious as it was the last time.”

Meanwhile acting Minister of State for Flood Relief, Kevin 'Boxer' Moran, got more than his hands dirty as he got a pump back in working order.

He said he got "a bit wet" while working at the back of Parnell Square in Athlone on Thursday morning.

"No spare set of clothes but the people are protected that's the main thing", he tweeted.

Speaking on the video, he said he was "drownded f***ing wet, though".

He said he "nearly got sick with the smell of it" - before adding: "There's one sure thing: she won't kiss me tonight, anyway!"

Got a bit wet this morning trying to get a pump going down at the back of Parnell Square, no spare set of clothes but the people are protected that's the main thing. @rtenews @shannonsidenews @Midlands103 pic.twitter.com/bBzhSSlxc3

Meanwhile, at least two families in Athlone are to be housed in emergency accommodation after their homes were flooded.

Athlone councillor Aengus O'Rourke said it is a worrying time for residents.

“When you see forecasts like we are being presented with at the moment, whereby over the course of Friday and Saturday we are expecting heavy rainfall, of course you would be concerned,” he said.

“However, I am pleased we are at the end of February and not the end of November, looking forward into three months more of heavy rain, deep depressions and perhaps extreme storms.

“So I think this will be short-lived. I think it may well peak next week and I think that after that we may well see the water receding.” 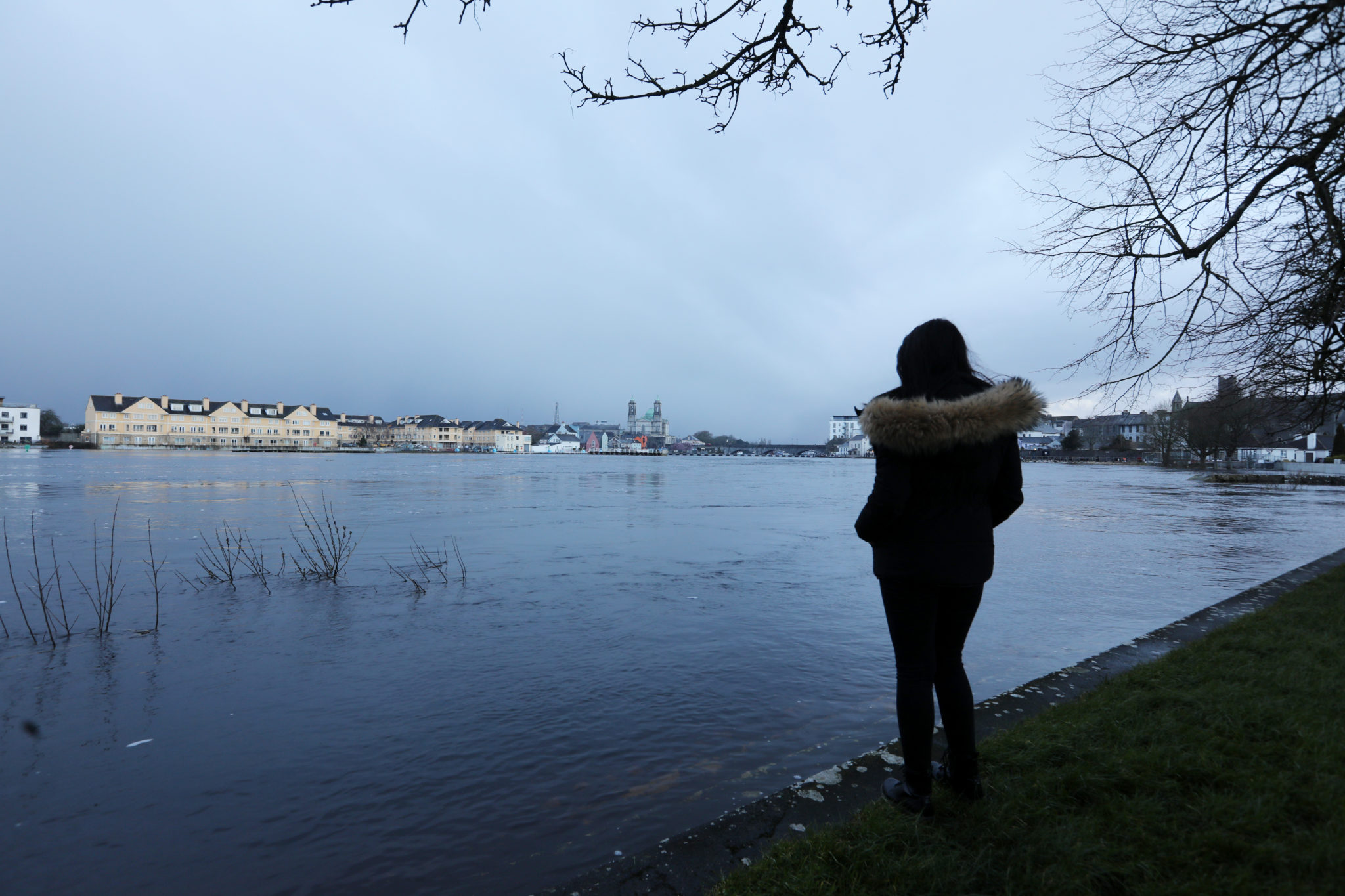 A young woman looks out over the swollen Shannon River in Athlone, 25-02-2020. Image: Eamonn Farrell/RollingNews

“At the moment we have had two houses impacted where the families have had to be relocated temporarily.

“I have been engaging with those families and the local authority has been working with them to provide emergency accommodation.”

No fines issued after Gardaí shut down mass at Westmeath church